The big news heading into American Outdoor Brands' (NASDAQ:SWBI) fiscal second quarter earnings report is, of course, the decision to split the company in two. Separating the outdoor gear and equipment maker from its Smith & Wesson firearms brand distances the former to pursue the much larger outdoor recreational market opportunity without the distraction of the volatile and politically charged gun business.

What investors will be looking for on Thursday, Dec. 5, is whether American Outdoor and Smith & Wesson will be financially sound companies. The split won't happen until next year, but the seeds of what the businesses will look like are being planted now. 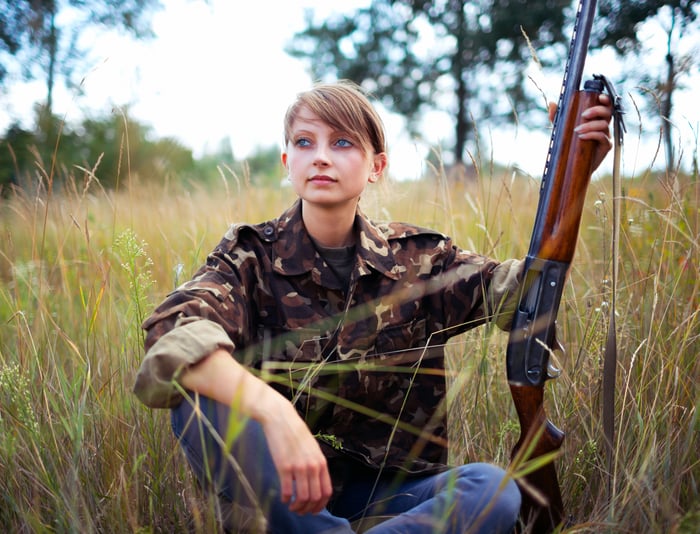 Coming out with guns blazing

Investors have liked the idea of the breakup, with shares rising 15% since the news was announced. But American Outdoor's stock was already rising, and shares are now more than 60% higher than their low point in early October.

Much of that is based on the improving firearms industry picture. Although not likely to return to the skyrocketing trajectory of 2015 and 2016, gun sales reached their bottom earlier this year and have since been consistently climbing again, rising by double-digit rates for the last three months. 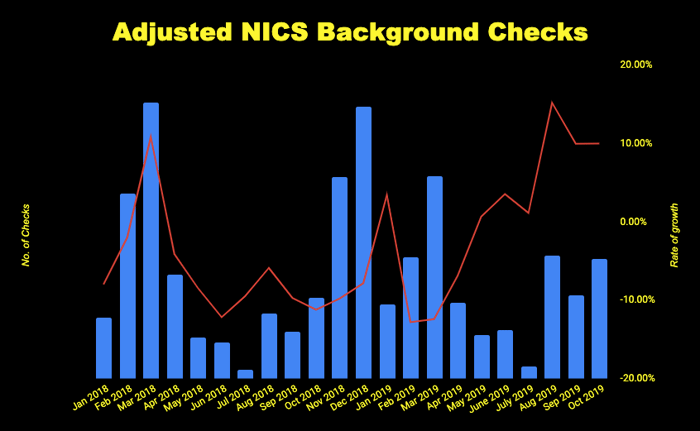 Some of those gains were driven by tough new gun control laws being enacted in several states, so it's not necessarily a reflection on the national scene as a whole. But as we prepare to head into what will undoubtedly be another emotionally charged presidential election, the prospects for increased sales building up in the quarters ahead are great.

Fear-based buying is not a sustainable model, but it does have the ability to shake the industry out of the doldrums.

In the first fiscal quarter, American Outdoor reported firearms segment sales fell 9.3% due not only to slack demand but also to the heavy promotional environment still gripping the industry as it tries to induce people to buy. American Outdoor doesn't sell directly to the public but rather to federally licensed dealers, and their inventories have remained elevated.

There is typically a lag between when indicators suggest gun-buying demand is improving and when they show up on American Outdoor's financial statements as higher sales, so the better conditions being seen now ought to result in more sales as dealers replenish inventories.

Unlike rival Sturm, Ruger (NYSE:RGR), which typically does not engage in the kinds of discounting and promotional activity that has been predominant in the industry, Smith & Wesson often discounts firearms so it can maintain and expand its market share.

That did contribute to American Outdoor reporting a $0.04-per-share loss in the quarter, but it's not expected to last. While analysts expect a 7.5% decline in sales this quarter, they see the company reporting profits of $0.06 per share, albeit that's a level some 70% below last year.

Lost in the wilderness?

The outdoor gear and equipment business has also had a rocky time, and sales in the segment fell almost 11% last quarter. American Outdoor hasn't gained quite as much traction as expected in this space, and organic sales were up only 1.2% in the last fiscal year. They've also been hampered by the trade war with China, where most of its products are made.

Tariffs have impacted results considerably and were largely the cause of the company missing its earnings guidance last quarter. So the hopeful notes being sounded in Washington of a possible agreement in the works are good news, though they're not likely to play much of a role in Q2 earnings.

When American Outdoor spins off into a separately traded company, it will have retired its debt and expects to be a well-capitalized business. It should also have more marketing opportunities, because retail outlets currently closed to it due to its firearms business will now be open to selling its goods.

Yet it will still be a small outdoor gear company with around $200 million or so in annual sales. Industry peer Vista Outdoor (NYSE:VSTO), which also sold off its firearms business this year, reported $234 million in outdoor products revenue last quarter.

There is a lot of sense in dividing the company in two, and the move indicates Smith & Wesson never should have gotten into the outdoor recreation market in the first place. Now that the two segments are going their separate ways, while the outdoor gear business might be less volatile, investors will see this quarter that the firearms business is still where the most growth will happen.