It should come as no surprise that Amazon (NASDAQ:AMZN) just had its best Cyber Monday in the company's history. As more and more shopping shifts from in-store to online, Amazon is a main beneficiary of the trend.

The online retail giant releases a roundup of its Black Friday and Cyber Monday highlights every year, and this year is no different. Among the announcements, Amazon revealed its bestselling products were (once again) the Echo Dot and Fire TV Stick 4K with Alexa Voice Remote. The company also noted, "Customers purchased millions more Amazon Devices compared to the same period last year in Amazon's Stores globally."

Amazon's success selling its own devices not only supports its retail business by bringing in customers during the biggest shopping days of the year, but also opens the door for burgeoning business opportunities with its growing device install base. 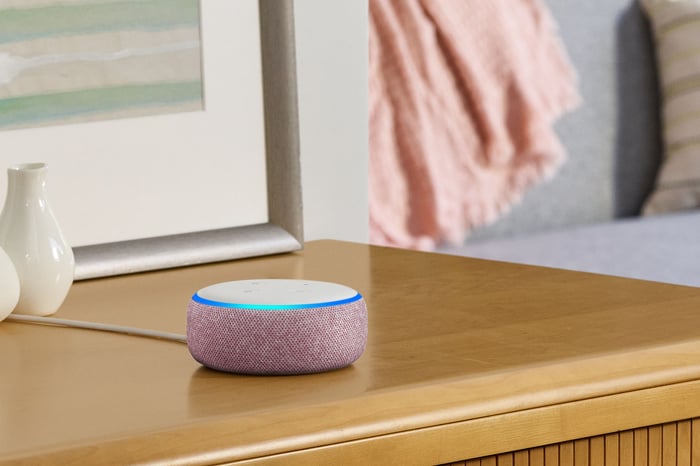 Alexa in every room

Amazon has quickly expanded the Echo smart speaker line and put its Alexa assistant on practically all of its devices. The company has good reason to get its device owners using Alexa more often. Alexa Skills in and of themselves are a multibillion-dollar business. And that's high-margin revenue for Amazon.

On top of that, Amazon's Music Unlimited subscription service offers another stream of revenue with relatively high margins. Even its ad-supported music streaming, which now comes free with Echo devices, could produce strong margins and revenue for the tech titan, as other streaming giants have managed to do.

Plus, Amazon generates greater marketplace sales from Amazon Echo owners compared to non-owners. It's hard to prove Echo devices actually cause increased spending on Amazon, but it's certainly easier to make impulse purchases with Alexa.

Amazon faces competition in smart speakers primarily from Google. The Alphabet (NASDAQ:GOOG) (NASDAQ:GOOGL) subsidiary has pulled closer in market share to Amazon over the last couple years, and it views smart speakers as a key part of its growing ecosystem of hardware. Both companies have become extremely aggressive in marketing and selling the devices below cost because of the big long-term opportunities presented by owning the smart speaker relationship in consumers' homes.

The other bestseller, Amazon's Fire TV Stick, is the company's biggest push into controlling more of the time consumers spend streaming video on their TVs. Amazon currently has the second-most-popular connected TV platform in the United States, trailing Roku (NASDAQ:ROKU) by a wide margin when it comes to hours spent streaming.

Amazon has been aggressive in getting Fire TV devices in people's homes. The company says it has more than 37 million Fire TV users around the world. That compares to just 32 million Roku users. The e-commerce giant still has work to do on increasing engagement among its users.

Amazon is able to sell its Fire TV devices below cost because they also offer a tremendous revenue opportunity. That doesn't go unnoticed by Roku, which has also slashed prices on its devices, leading to shrinking gross margin on its hardware sales.

Amazon's success with selling its own devices, even at steep discounts, should encourage investors that it's still doing well taking on Google and Roku in the smart speaker and streaming device markets. Both devices present advertising opportunities and openings to sell additional services, and should encourage shoppers to subscribe to Prime. So the millions of Amazon devices headed to consumers' homes this week should help the company have another year of strong growth across multiple businesses in 2020.