After punching below its weight since the real estate bubble burst in 2008-09, it looks like the homebuilding sector is finally gathering some momentum. Recent data points like building permits, new home mortgage applications, and homebuilder sentiment indicate that the long-awaited recovery is finally complete. Homebuilders like D.R. Horton (NYSE:DHI) are hoping to benefit from the projected future growth.

Historically, housing has led the economy out of recessions, and it’s conspicuous that this current recovery is coming during a long period of economic strength. 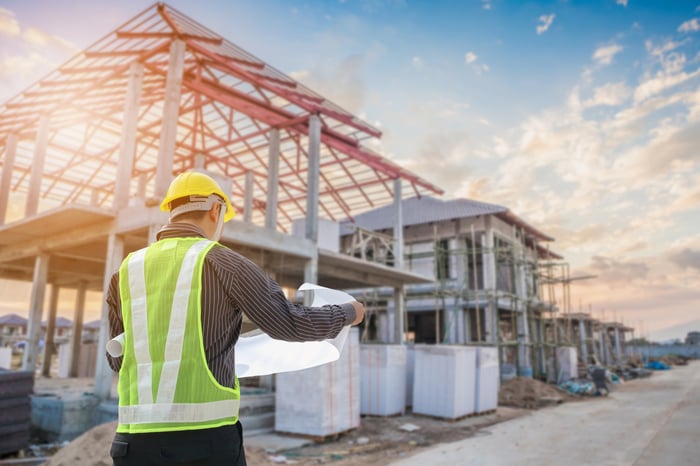 How do we know the real estate sector is back?

The Census Bureau recently released its Monthly New Residential Construction Report for October, which showed a big jump in building permits to 1.46 million units issued on an annualized basis. That's the highest reading since May 2007, just before the Great Recession. While impressive, this stat doesn’t do enough to illustrate how much the U.S. housing sector has underbuilt over the past decade. The chart below shows building permits going back to the Kennedy Administration. From 1960 until 2002 (right before the housing bubble really took off), building permits averaged 1.4 million units per year. 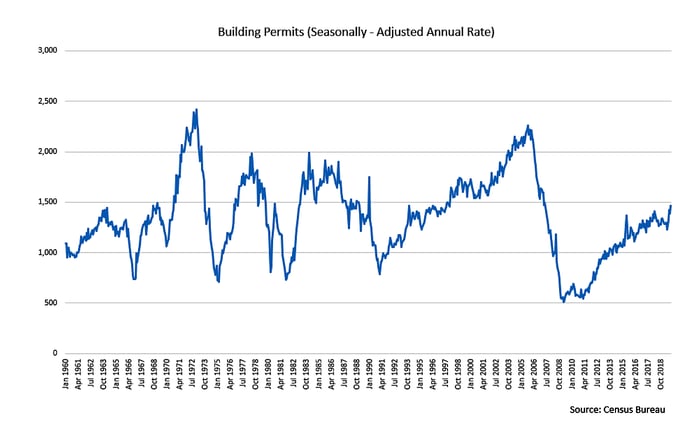 While it is true that some forms of housing in the U.S. were overbuilt during the bubble years, that extra inventory was absorbed into the system long ago. Plus, the historical averages are not sufficient to supply a growing U.S. population that is significantly higher than it was in 1960.

Building permits are not the only recent indicator that shows things are picking up. The Mortgage Bankers Association reported that new home purchase mortgage applications increased by 31.5% compared to a year ago. The National Association of Homebuilders/Wells Fargo Housing Market Index (a measure of homebuilder sentiment) is also at levels associated with previous homebuilding peaks. All these economic data taken together suggest that we could be at an inflection point in the housing market.

The demand for housing is certainly there -- in the October Existing Home Sales report from the National Association of Realtors, total housing inventory for sale was 1.77 million units, which represents a 3.9-month supply. Historically, a balanced housing market has a six-month supply of homes available for sale. But first-time homebuyers accounted for 31% of sales, which is below the norm of around 40%. This is an indication that the first-time homebuyer has largely missed out on the housing recovery.

Falling interest rates and rising wages are providing a sturdy floor for the sector to build upon. After concentrating on building luxury properties (especially urban apartments) in the years after the bust, builders are finally focusing on adding more entry-level homes, where the supply shortage is most acute and where the demographic demand is highest.

So, as an investor, how can you take advantage of this trend?

The first time homebuyer is where the action is

D.R. Horton is the largest homebuilder in the United States, with operations in 90 markets and 29 states. Geographically, D.R. Horton covers most of the U.S. with less coverage in the Northeast, northern Mountain states, and some parts of the Midwest. The company specializes in four different housing brands that target separate demographic groups -- D.R. Horton (move-up), Express (entry-level), Freedom (active adult), and Emerald (luxury). In the fiscal year ending Sept. 30, 68% of its home sales were in the sub-$300,000 price point. First-time homebuyers accounted for over 50% of its sales in 2019, which shows the company is targeting exactly the right segment for future growth -- affordable homes.

In the most recent quarter, D.R. Horton reported that sales rose 9% in units and 10% in dollar volume on a year-over-year basis. In addition, the company maintained its gross margins. This means the company hasn’t had to resort to discounting in order to sell homes. There have been additional cost constraints for the builders, particularly shortages of affordable lots and skilled labor, which have yet to flow through to margins. As far as future interest, while the millennials have largely favored urban, walkable environments (read apartment renting), that preference appears to be changing as they begin to raise families. The growth in remote working is making commuting distances less of an issue as well, which means exurban environments (with their cheaper land and lower price points) are becoming more attractive.

The fundamentals are in place for a multi-year housing boom

The economy is strong, wages are rising, interest rates are low, and there is a dire shortage of affordable homes in several markets. The biggest generation since the baby boomers is looking to move out to the suburbs, just as remote working is becoming more of a reality. D.R. Horton is at the epicenter of this emerging trend and is in a great position to take advantage. It would appear investors in the company are poised to benefit as well.