Southern Company (NYSE:SO) is one of the largest utility companies in the United States, with a trailing 12-month revenue of $21.84 billion. And after 71 consecutive years of paying dividends, it has become a staple in income investors' portfolios. Those who own it today are enjoying a payout that yields 3.94%, even in the wake of a 43% share price increase so far in 2019.

However, before investors hit the buy button on Southern Company's impressive share price increase and dividend yield, there are a few things to consider. 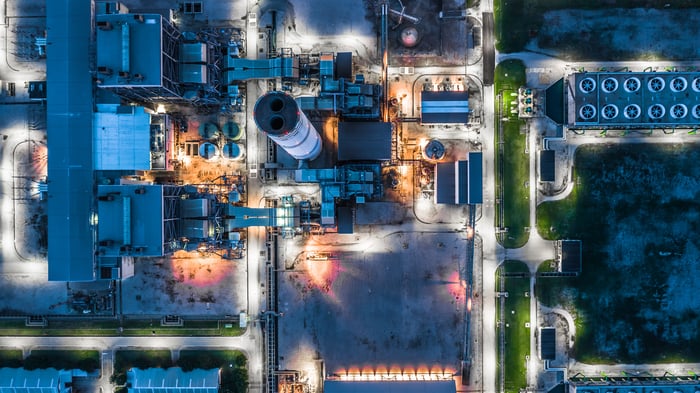 After Westinghouse went bankrupt in 2017, Southern Company took over the construction of the Vogtle nuclear power plant in Georgia -- one of the two projects that pushed Westinghouse into Chapter 11. Though it had gone far over budget and fallen far behind schedule under Westinghouse, Southern Company's execution at Vogtle is showing promise -- in its third-quarter report, it said the project was 81% complete. Two units are on track to be operational in 2021, which is giving investors confidence in the project. That, in turn, has in part driven the recent run-up in the company's share price.

As a regulated and fee-based utility, Southern Company is not designed for rapid growth. It does have a monopoly in electric and gas in the regions it serves; however, rate increases must be approved by state regulators, which limits its upside potential. On the positive side, that regulation means consistent revenues in good times and bad, and consistent dividends for shareholders.

To expand its territory, Southern must invest in new projects, which can help it justify rate increases. But if a project goes sour -- as the Kemper clean coal plant did -- capital efficiency can take a dive, thereby lowering gains on reinvested capital. Because of these factors, investors shouldn't expect dividend growth above the company's five-year CAGR of 3.41%.

Doesn't look as good compared to others

Southern's total debt of $47.783 billion is on the high side, relative to its debt-to-equity ratio over the last 10 years. Currently, that ratio is 1.72, which is close to its 10-year peak of 2.14. By comparison, close competitor Duke Energy (NYSE:DUK) has a debt-to-equity ratio of just 1.33 -- and higher leverage equates to increased shareholder risk. Both companies have similar market capitalizations, with Southern at $65.3 billion and Duke at $64.3 billion -- making for a good head-to-head comparison.

Comparing the two companies further, Southern's revenue shrank 8.17% year over year, while Duke's grew 2.35%. In addition, Duke dividend has a forward yield of 4.32% -- 0.33 percentage points above Southern's – from a lower 75.29% payout ratio compared to Southern's 79.72%. As both payout ratios are above 75%, investors should pay close attention. Company's that distribute an outsize portion of their earnings to shareholders leave themselves less room to invest in growth.

Southern's share price is up 43% in 2019, and its forward price-to-earnings ratio of 19.99 makes it a bit more expensive than Duke Energy, trading at a forward P/E of 17.64. And as noted above, its higher debt-to-equity ratio gives it, by one measure, a higher risk.

Southern's dividend is sustainable, and the utility should benefit from the Vogtle nuclear plant. However, income-focused investors looking for a utility stock now should consider Duke Energy instead: With its higher dividend yield and its lower debt-to-equity ratio, it's the winner in the near term. In the wake of Southern's 2019 share price increase, investors should hold it on their watch lists, and reconsider picking up shares if there's a pullback.