A glance at Zoom Video Communications' (NASDAQ:ZM) stock price in after-hours trading on Thursday may lead investors to think the communications-software specialist whiffed on its third-quarter earnings. But the numbers from the quarterly update tell a different story, with both revenue and non-GAAP (adjusted) earnings per share (EPS) beating analysts' average forecasts by a wide margin.

It was an all-around great quarter. The company's customer count soared, and existing customers increased their average spend with Zoom. 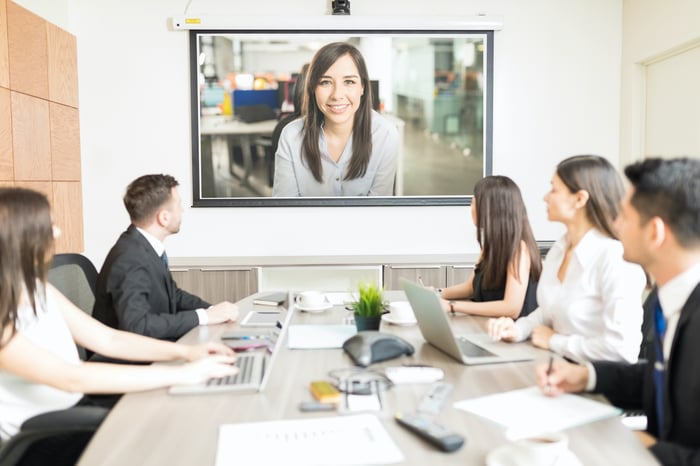 Zoom also said its customers with 10 or more employees increased 67% year over year, rising to 74,100.

Looking ahead, management said it now expects revenue for the full year of fiscal 2020 to be between $609 million and $610 million. Previously, management was expecting revenue between $587 million and $590 million for the period. Zoom also upped its full-year outlook for non-GAAP EPS from a range between $0.18 and $0.19 to an expectation of about $0.27.

What's up with the stock's sell-off?

All of this sounds great. So why did shares sell off?

The culprit is likely Zoom's pricey valuation. Shares trade at about 38 times sales. Viewing the valuation another way, the company has a $17.5 billion market capitalization despite only boasting an annualized non-GAAP net income run rate of about $100 million.

Further, while Zoom's 85% revenue growth was strong, it was notably down from 96% growth in Q2. The market has very high expectations for Zoom, and a deceleration in the company's year-over-year revenue growth rate may have spooked some investors.

On the other hand, investors could argue that Zoom's outperformance on its bottom line implies that more substantial earnings could come sooner than expected.

Investors, of course, shouldn't give too much weight to a single-quarter's results. But if revenue growth keeps decelerating meaningfully in the quarters ahead, investors may need to rethink Zoom's valuation.

Editor's note: A previous version of this article mistakenly referred to the prior quarter as Q3 instead of Q2. The author regret's the error.