Tellurian (NYSEMKT:TELL) and Cheniere Energy (NYSEMKT:LNG) are the David and Goliath of the liquefied natural gas (LNG) market. Unlike other, more diversified energy stocks, both companies are going all in on a sustained U.S. natural gas boom dependent on infrastructure developments to export the natural gas, in liquid form, to buyers across the world. The first and arguably more important question to ask is if a sustained natural gas boom is possible, and if so, which company is better positioned to benefit?

The U.S. is now the No. 1 oil and gas producer in the world. In 2017, the U.S. was a net exporter of natural gas for the first time since 1957. If you were to ask how many Americans thought this would be possible 10 years ago, it would have likely been very few. 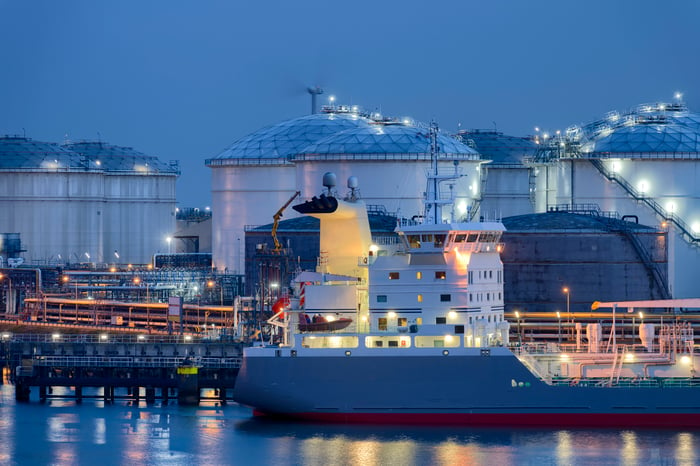 That's because U.S. energy success has largely stemmed from the shale revolution, where producers have found new ways to use hydraulic fracturing and horizontal drilling to make exploring tight shale rock formations economically feasible. The shale revolution looks to continue, as interest is high for infrastructure developments, from pipelines to roads, that are critical to sustaining a long-term oil and gas boom.

Equally important to infrastructure is the amount of hydrocarbon reserves. According to the U.S. Energy Information Agency (EIA), "proved reserves of natural gas increased by 123.2 trillion cubic feet (Tcf) (36.1%) to 464.3 Tcf at year-end 2017 -- a new U.S. record for total natural gas proved reserves." To further illustrate the shale revolution's impact, two-thirds of the total proved reserves cited by the EIA are natural gas from shale.

The future prospects of U.S. natural gas production bode well for Cheniere and Tellurian, who are playing the market in similar ways by investing in massive LNG infrastructure projects consisting of pipelines, liquefaction facilities, export terminals, and production assets.

More important than liquefaction capacity is the ability to generate solid returns. To protect itself from commodity price swings, Cheniere has adopted a long-term, fixed-fee contract model. It has contracted 80-95% of its 45 metric tonnes per annum (mtpa), which includes the additional capacity from Corpus Christi Stage three. Buyers have already lined up for the seven trains Cheniere is operating from Sabine and Corpus Christi, paving the way for full-year 2020 consolidated adjusted EBITDA guidance of $3.8 billion to $4.1 billion and $1.0 billion to $1.3 billion in distributable cash flow (DCF).

With just two of the total nine trains left to go, Cheniere should be able to increase its earnings and lower its spending before the real payoff comes into play in 2023, when the company anticipates all nine trains to be operational. In that environment, Cheniere expects $5.2 to $5.6 billion in consolidated adjusted EBITDA, leaving $2.5 to $2.9 in DCF ($8.40 to $9.60 per share under assumed share counts).

Cheniere is close to completing its growth strategy, and has modeled its business to have as much revenue as possible coming from long-term contracts with fixed fees. That's a rather safe bet for such a new business.

Tellurian was founded in 2016 by Cheniere co-founder and former CEO Charif Souki the same year Cheniere began construction on its first liquefaction train for the Sabine Pass. Currently, Tellurian is little more than a $2 billion LNG start-up with aspirations to construct an LNG all-purpose facility capable of exporting 4.0 bcf/d of natural gas, more than Cheniere's Sabine Pass.

To do that, Tellurian needs to find financing to complete the project. To do so, it is selling an equity stake in the Driftwood terminal to potential partners. It made a major stride in that direction in late September when it signed a $2.5 billion deal with Indian LNG importer Petronet LNG. Petronet plans to buy five million metric tons of LNG per year, or about 18%, from Tellurian's Driftwood LNG export terminal in Lake Charles, Louisiana.

Tellurian plans to control as much of the LNG value chain as possible by constructing several pipelines to take advantage of cheap natural gas supplies. The pipelines, along with the facility itself, are estimated to begin service in 2023.

In terms of earnings potential, Tellurian expects its remaining stake in Driftwood to generate over $2 billion in cash flow, or over $8.51 per share under a five-plant case.

Tellurian's forecast can appear lofty since it's based on running five plants, which is the full development of the entire liquefaction project. Compare that to Cheniere, which is already seven of nine trains into its two projects, and Tellurian's prospects appear comparatively uncertain.

Forecasts under a two plant case or a three plant case leave Tellurian with a lot less cash flow per share, $2.65 for the two-plant case and $3.77 for the three-plant case based on the same $3.50/mmBtu (million British thermal units) margin that Tellurian forecasted for $8.51 cash flow per share in the five plant case. In sum, Tellurian has a much longer way to go than Cheniere, but its efforts could prove advantageous for investors if management is able to hit the high end of its growth forecast, meaning the five-plant case.

Investors who buy into either growth stock are relying on mainly three things: a sustained U.S. natural gas boom, management's ability to execute on the completion of their respective facilities, and steady demand aborad.

Being a smaller company, Tellurian has more upside. It goes without saying that this is a risky stock in which to invest and could easily blow up if bottlenecks emerge and cause delay.

The payoff for investment in Cheniere could happen sooner than Tellurian, as illustrated in Cheniere's DCF projections in 2020 and 2023. Tellurian is undoubtedly an interesting stock to watch, but Cheniere gains the edge as the No. 1 LNG stock for 2020 due to its proven success in infrastructure investment and advantageous position to capitalize on the time-sensitive LNG export market.