The Dow Jones Industrial Average (DJINDICES:^DJI) rocketed higher on Friday, up 1.2% by 2:25 p.m. EST following some very strong jobs data. Payrolls rose 266,000 in November, well ahead of estimates, helped along by the end of the strike at General Motors. The unemployment rate fell to 3.5%, the lowest since 1969.

Leading the Dow on Friday was 3M (NYSE:MMM), which jumped following reports that the company was looking at divesting a business unit for around $1 billion. Shares of Microsoft (NASDAQ:MSFT) were also higher, possibly helped by rumors of a broader consumer-software bundle coming next year.

Industrial conglomerate 3M led the Dow on Friday, rising 3.8% after Bloomberg reported that the company is exploring the sale of its drug-delivery systems unit -- which could be worth about $1 billion, according to Bloomberg's sources. The drug-delivery systems unit produced $300 million of revenue in the first nine months of the year, down 11% from the prior-year period. 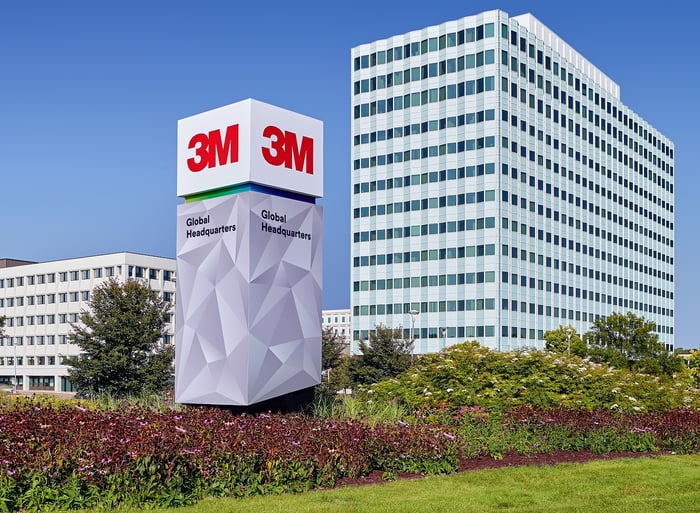 Along with its third-quarter report in October, 3M cut its guidance for full-year organic sales growth and earnings to reflect market trends. Total revenue was down 2% in the quarter, thanks to a tough macroeconomic environment. The company's stock has performed poorly this year, down around 10% even after Friday's rally.

3M is reportedly working with an advisor to run an auction process for the unit, which includes products like asthma inhalers and skin patches. Bloomberg's sources say that interest from private equity firms is likely.

The market is reacting positively to this plan to get rid of an underperforming business. 3M stock has been in the doldrums since late April, when the company missed first-quarter estimates, cut its 2019 outlook, and announced layoffs as part of a restructuring plan. The $6.7 billion acquisition of wound-dressings company Acelity, announced in May and closed in October, did little to change investors' minds on the stock.

While 3M stock has been beaten down this year, it's still not cheap. Based on the company's guidance, the stock still trades for about 19 times adjusted earnings.

Tech giant Microsoft has found success in both the commercial and consumer markets with its Office 365 subscription product. Office 365 took the company's venerable Office suite of productivity software and bundled it into a subscription service, offering frequent updates and new features in exchange for a monthly fee.

During Microsoft's fiscal first quarter, commercial office products and cloud-services revenue rose 13%, thanks to a 25% increase in commercial Office 365 revenue. On the consumer side, the company now has 35.6 million Office 365 subscribers.

According to ZDNet, Microsoft is planning to launch something similar on the consumer side in 2020. With a working name of M365 Life, the new subscription product is expected to be a rebrand of Office 365 with some added features. Possible additions include a password manager and a version of Microsoft's Teams messaging service, according to ZDNet. Windows 10 doesn't seem to be involved, but Microsoft could certainly tie its operating system to the subscription product somewhere down the road.

The more Microsoft software a consumer relies on, the less likely they are to switch to alternatives. A broader bundle, like the rumored M365 Life, could make switching costs higher for consumers, locking them into the Microsoft ecosystem.

Shares of Microsoft were up 1% on Friday, but a strong day for the stock market may be mostly responsible.