A number of biotech companies are awaiting responses from the U.S. Food and Drug Administration (FDA) this month. If granted approval from the agency, it wouldn't be surprising if many of these stocks see a big jump following the news.

While many drug candidates will receive a response from the FDA this month, some are more promising and have more blockbuster potential than others. Here are the four most important FDA dates, as well as their corresponding drug candidates, that investors should pay attention to in December. 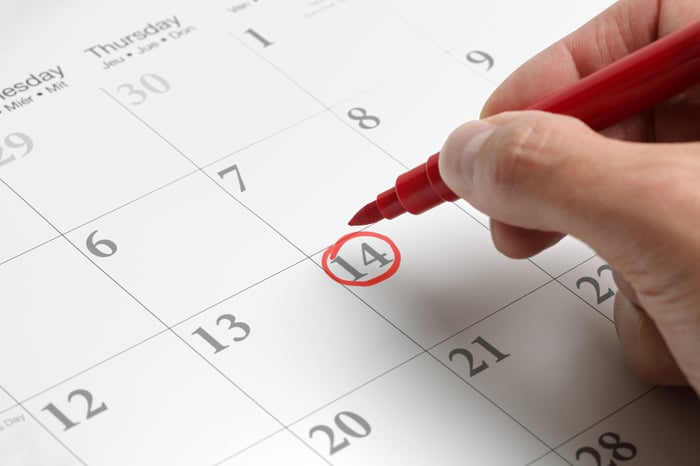 Amgen (NASDAQ:AMGN) is awaiting a response from the FDA for its inflammation drug ABP 710, which is expected to come out on Dec. 14. The drug is meant to treat a number of inflammatory-related conditions, including various types of arthritis, Crohn's disease (inflammation of the intestinal tract), ankylosing spondylitis (arthritic inflammation of the spine), and a number of other disorders.

ABP 710 was submitted for FDA review in December 2018 as a biosimilar drug to another inflammatory drug, Johnson & Johnson's Remicade. While there's some competition in this area, the anti-inflammatory drug market is huge, with the global market expected to reach $106.1 billion by 2020. Getting even a small piece of this market share would be worth billions in revenue for Amgen. As such, it's understandable why anticipation has been strong for this drug.

Bausch Health Companies (NYSE:BHC) is working on its acne treatment, IDP-123, and the FDA accepted the company's New Drug Application (NDA) in August. While there are other acne treatments already available, IDP-123 stands out for being the first tazarotene treatment available in a less-concentrated lotion form.

Tazarotene, a type of topical vitamin A medication that improves acne by clearing up skin pores and reducing the number of lesions on the skin, has typically been seen in foam or gel form. However, tazarotene use often carries some side effects, with acne frequently getting worse before it gets better. As such, there's a market for lower concentrated forms of tazarotene for acne treatment, especially when a patient is first taking this treatment. IDP-123 has seen strong results in its two phase 3 clinical trials, where patients with moderate to severe acne saw strong improvements and tolerated the treatment well.

Lumateperone is a new schizophrenia treatment being developed by Intra-Cellular Therapies (NASDAQ:ITCI). As the smallest company on this list with a market cap of just $536 million, Intra-Cellular has perhaps the biggest upside potential should it hit a home run with this schizophrenia drug.

The FDA was initially scheduled to make its announcement on Sept. 27. However, this was pushed back by three months after Intra-Cellular provided additional, non-clinical study data surrounding the drug's effectiveness following a request for clarification from the FDA.

The global schizophrenia treatment market is a $14.9 billion market with relatively few competitors, and Intra-Cellular can hit a major home run with Lumateperone should the FDA give it a seal of approval.

Amarin (NASDAQ:AMRN) received a piece of good news in November when a preliminary FDA advisory committee gave the fish oil drug Vascepa a major thumbs up by unanimously recommending the drug receive approval. Targeted to patients with a high risk of heart attack and stroke, Vascepa has shown promising results in lowering levels of "bad" LDL cholesterol.

It's a big deal for Amarin, as Vascepa is already projected to see peak revenue of over $4 billion in the coming years, an astonishing amount for a company with quarterly revenue of only $112.4 million.

The drug has also received a number of major recommendations from prominent healthcare organizations around the world, including the American Heart Association. As such, the odds seem to be strongly in Amarin's favor that the FDA will approve Vascepa later this month.