There's been some uncertainty about how the launch of new premium streaming services like Disney's (NYSE:DIS) Disney+ or Apple's (NASDAQ:AAPL) Apple TV+ would impact Roku (NASDAQ:ROKU). Many saw the low price of Apple TV+ and Apple's bundling strategy with its hardware as a big negative for the streaming video device company. Still others have expressed concern that more time spent streaming ad-free video on Roku devices will negatively impact its advertising business.

Management isn't concerned at all. "They're obviously going to drive viewing overall on our platform, or engagement, which is good," CEO Anthony Wood said of Disney+ and other premium streaming competitors entering the market on Roku's third-quarter earnings call. Early indications suggest Wood's prediction was accurate. The Roku mobile app saw nearly a 30% jump in downloads since the launch of Disney+, according to data from Apptopia. (The Roku app is mostly used as a remote for Roku devices.)

Disney+ is pushing more consumers to buy streaming devices like Rokus, which will propel the company's business even if it doesn't collect ad revenue directly from the increased time spent streaming. 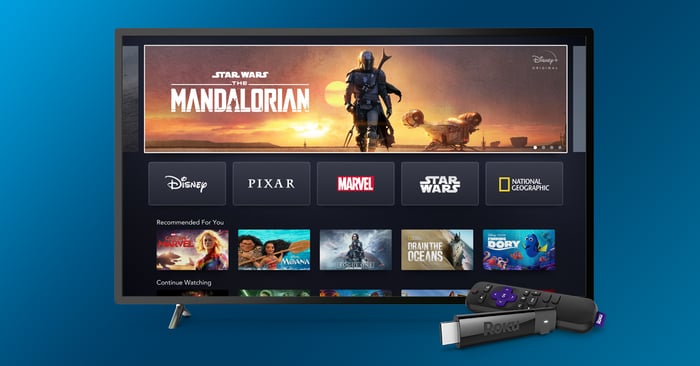 Roku's ad business has grown alongside the increasing popularity of free ad-supported video on demand, or AVOD. That stands in contrast to subscription video on demand, or SVOD, which generally doesn't have advertisements (with just a few notable exceptions, like Disney's Hulu and ESPN+).

Roku generates revenue from AVOD channels by taking a percentage of ad inventory for itself, usually about 30%. It also competes in the space with The Roku Channel, which contains both licensed content from Roku and ad-supported content from partners.

The growth of AVOD has propelled Roku's ad revenue growth. Platform revenue was up 79% year over year in the third quarter, with video advertising driving that growth. The impact of the shift in revenue to video ads is evident in Roku's platform gross margin, which fell to 62.6% last quarter compared to 70.5% in the prior-year period. Video ads have a lower gross margin than other platform revenue.

It's easy to see how several new ad-free streaming options could cut into one of Roku's biggest revenue growth drivers. If consumers are spending more time in Disney+ or Apple TV+ and less time in The Roku Channel, Roku's unable to directly monetize the time users spend on its platform. So even if they drive engagement, it might not be so good, as Wood suggests.

Roku still has a lot of opportunities to draw value from Disney+ and Apple TV+. "I won't comment on the economics of any specific partner except to say that our relationships are multifaceted," said Scott Rosenberg, head of Roku's platform business. "We're mutually incented to drive the success of these services through the Roku ecosystem."

Wood noted that spending money on Roku's customer acquisition ads is "more effective than probably any other way they spend their marketing dollars." Disney might agree. It bought a home screen takeover the weekend after launching Disney+ in an effort to drive more sign-ups for its flagship streaming service. Roku users were greeted with a Disney-themed home screen and an ad to sign up for Disney+.

Importantly, as more competition enters the space, the value of Roku's premium ads for customer acquisition increases. Not only does Roku collect marketing dollars from those ad placements, but it'll also get a share of subscription revenue for each new sign-up.

So the increased interest and engagement on Roku's platform stemming from the launch of Disney+ or Apple TV+ will certainly benefit the company. Even if the mix-shift in time spent moves back toward ad-free content, Roku ought to see a big benefit to its platform business outside of its video ad sales. And that additional revenue growth will come at higher margins than its video ad business, so it's a big win for Roku.