Amazon (NASDAQ:AMZN) is often depicted as an unstoppable juggernaut in the retail and cloud markets. The numbers certainly support that thesis: It's the largest online retailer by annual revenue in the world, and Amazon Web Services (AWS) controls nearly half of the global cloud platform market, according to research and advisory firm Gartner.

Yet Amazon's revenue growth is decelerating, and the expansion of its online marketplaces and digital ecosystem are throttling its earnings growth. Meanwhile, four of its rivals -- Microsoft (NASDAQ:MSFT), Target (NYSE:TGT), Walmart (NYSE:WMT), and Etsy (NASDAQ:ETSY) -- could exacerbate that pain. 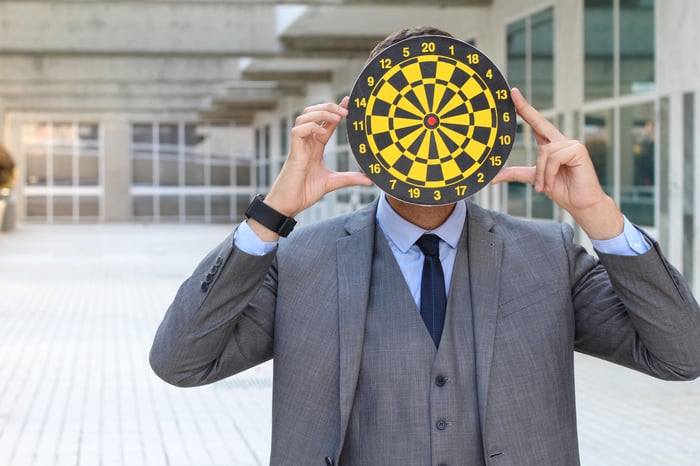 AWS accounted for just 13% of Amazon's revenue last quarter, but it generated 72% of its operating profits. AWS represents the heart of Amazon's business, because its higher-margin revenue subsidizes the expansion of its lower-margin marketplaces.

2. Target and 3. Walmart: The resurgent superstores

Target and Walmart initially struggled to compete against Amazon, but both superstores executed multi-year turnaround plans to renovate their stores, match Amazon's prices and delivery options, and turn physical locations into fulfillment and pick-up locations for online orders. Those efforts were costly, but they paid off.

Target's digital comps soared 31% annually last quarter and accounted for 7.5% of its total sales, with 80% of that growth coming from its new Order Pick Up, Drive Up, and Shipt same-day delivery services. It also claimed that its new loyalty program, Target Circle, had already gained over 35 million members. Walmart's domestic e-commerce comps surged 41% annually last quarter, thanks to the growing demand for its grocery delivery services, and accounted for about 6% of its U.S. sales. It plans to offer free same-day grocery pickup at over 3,100 stores and same-day grocery deliveries at over 1,600 stores this year, and it recently launched a new Delivery Unlimited membership plan (which costs $98 per year) and a pilot program for in-home deliveries.

Target and Walmart's resilience spell trouble for Amazon, which still can't match their brick-and-mortar reach with its fulfillment centers, Whole Foods stores, lockers, and experimental stores. That's why many analysts have speculated that Amazon needs to buy a major brick-and-mortar retailer (like Kohl's) to keep up.

Etsy, the online marketplace for handmade goods, is another thorn in Amazon's side. Amazon tried to challenge Etsy with its Handmade marketplace, but its higher fees and bans on promotional tools (like mailing lists and links to personal sites) alienated many merchants.

Moreover, a recent survey by Faire found that 65% of millennial shoppers preferred holiday gifts from local independent retailers instead of mass retailers like Amazon. It found 64% were willing to pay more for a gift from an independent retailer, and 37% of millennial women preferred to receive handmade gifts. Half of all respondents preferred their gifts to be made in the United States, which bodes ill for Amazon's growing dependence on Chinese goods.

Those factors explain why Etsy continues to grow in Amazon's shadow. Its number of active buyers grew 21% annually to 44.8 million last quarter, as its number of active sellers grew 27% to 2.6 million. Etsy's growth decelerated over the past year, but analysts still expect its revenue and earnings to grow 26% and 21%, respectively, next year. Amazon is expected to post 19% sales growth and 31% earnings growth next year.

I'm not saying that Microsoft, Target, Walmart, and Etsy will ever mortally wound Amazon. However, investors shouldn't overestimate Amazon's strength, and they should realize that it could struggle to counter these hungry challengers.