Apple's (NASDAQ:AAPL) long-awaited Mac Pro is finally here. The tech giant will start taking orders for the redesigned computer for professionals on Tuesday, Dec. 10. Unveiled earlier this summer, the computer has been a long time in the making. This will be Apple's first Mac Pro launch since June 2013.

Though it's unclear whether the new product will have a meaningful impact on Apple's Mac business, one thing is clear: This is a niche product for customers looking for the most power possible and willing to pay a significant price. While Apple throws around the "pro" designation on its product names quite liberally, it isn't kidding around when it comes to the all-new Mac Pro. 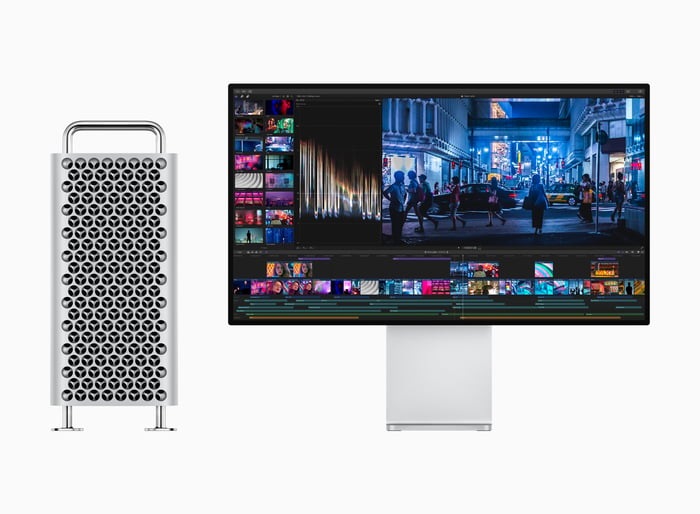 Apple's Mac Pro "features workstation-class Xeon processors up to 28 cores, a high-performance memory system with a massive 1.5TB capacity, eight PCIe expansion slots and a graphics architecture featuring the world's most powerful graphics card," the company said in a press release on June 3, 2019, when Apple unveiled the new computer at its annual developers conference.

Of course, customers can use their own monitor. The Mac Pro can power up to 12 4K displays or six of its 6K 32-inch Pro Display XDRs.

Notably, this isn't Apple's first expensive computer catering to professionals -- it just takes the company's previous products to a whole new level. Apple already has an iMac Pro, which starts at $4,999 and features a built-in monitor and stand.

Apple's Mac business is doing well. Revenue from the segment in fiscal 2019 was a record high, rising 2% year over year to $25.7 billion. In addition, Apple said in its fiscal fourth-quarter earnings call that the segment is still attracting customers entirely new to Mac. In fact, over half of the customers who purchased Mac during the quarter were new to Macs, said Apple CFO Luca Maestri. Further, the installed base of Macs in use is at an all-time high, management said.

Given the Mac Pro's niche market, sales of the computer are unlikely to have a meaningful impact on the segment in fiscal 2020. Nevertheless, the product serves an important purpose for Apple, helping the company connect with professional customers -- some of whom could prove to be influencers and loyal customers.