Can you drive straight through a bear market?

If Tuesday's trading is any indication, the answer might just be yes. On the back of encouraging quarterly financials, two long-standing vehicle industry stocks -- one a retailer and one a manufacturer -- rose notably higher on the day. That was in contrast to the numerous dips suffered by the market's top stocks. Grab the keys, and let's take a short ride in each. 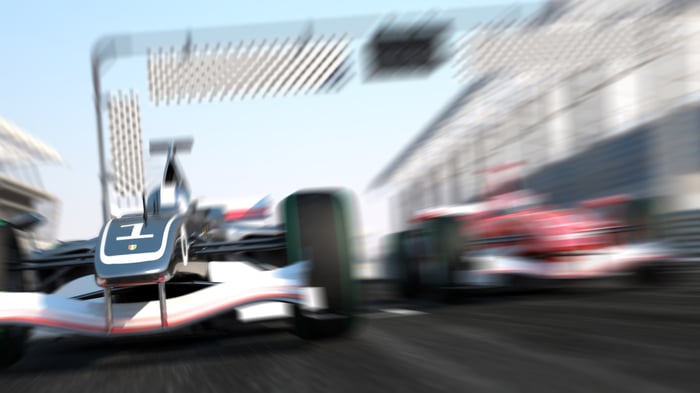 AutoZone (NYSE:AZO) had a very memorable Tuesday -- its shares surged almost 7% higher to close at a new all-time high.

That's because the company's inaugural quarter of fiscal 2020 was very strong. AutoZone reported Q1 results before market open, revealing that net sales for the period rose almost 6% on a year-over-year basis to $2.79 billion. Underlying this was a domestic same-store net sales increase of 3.4%.

Due to a higher effective tax rate related to stock options, AutoZone's net income fell marginally over the one-year span to land at just over $350 million ($14.30 per share).

On average, analysts had been projecting $2.77 billion in net sales and a per-share net profit of merely $13.70.

A still-strong economy is boosting both retail and commercial sales, AutoZone said. For the latter segment, the company recorded a 14% rise in revenue. That was the fifth consecutive quarterly double-digit increase.

AutoZone has powered itself into a win-win situation. If the economy continues to thrive, consumers are likely to spend more of their disposable income at retailers. If it doesn't, they'll probably keep their existing cars on the road longer, necessitating more replacement parts and hence more business for a leading vehicle parts seller like AutoZone.

That's why I'd still be bullish on the company's stock -- I think it can go higher in price, and this latest level won't be a record high for long.

Another vehicle stock motoring higher was Thor Industries (NYSE:THO), the shares of which rose by nearly 6% on the day.

In contrast to AutoZone, Thor's Q1 of fiscal 2020 figures -- released Monday morning -- were discouraging. This, despite the fact that the company posted a revenue increase of almost 23%, with the top line $403 million higher at $2.16 billion. Net income rose by nearly fourfold, at just over $51 million, or $0.92 per share.

When adjusted for acquisition-related costs, net profit came in quite a bit higher on a per-share basis, at $1.50 per share.

Collectively, analysts were modeling $2.23 billion in total revenue, and an adjusted per-share net profit of $1.23.

There is a big asterisk next to the revenue figure, though. It was greatly helped by the inclusion of Erwin Hymer Group, a top European RV maker. Hymer contributed $493 million in revenue to its owner, hence the overall top-line increase. Without Hymer, Thor's revenue figure would have dipped on a year-over-year basis.

That alone helps explain why Thor's stock took a hit on Monday. So why the sudden bull rush on Tuesday?

Well, a deeper dive into the quarterly results shows that Thor's gross margins saw a nice improvement of 250 basis points. This indicates that the company is running a leaner operation; if it can continue down that path, its net profitability should benefit.

Also, sales volume isn't everything -- in spite of the dip in overall U.S. RV numbers, the company has seen improvements in the luxury segment.

Still, I'm cool on Thor stock these days. I don't believe these positive factors mitigate the sluggishness in U.S. sales, and I don't feel a big acquisition in the ever slow-growing European economy is the answer. I'd give these shares a miss.