Just four years after dropping $1 billion on craft brewing upstart Ballast Point, Constellation Brands (NYSE:STZ) is selling its record-making prize for an undisclosed sum (read, pennies on the dollar) to tiny operation Kings and Convicts Brewing just outside of Chicago. According to Constellation's most recent quarterly filing, it valued Ballast Point at just $17 million. Yikes.

Ballast Point will fall under the definition of "craft" again, which will likely make craft beer aficionados and fans of Ballast Point's flagship Sculpin IPA happy. But Constellation's blown keg of a deal should provide a warning to corporate beer and its attempts to respond to disruption by acquiring fast-growing upstarts. Growth via acquisition isn't all it's cracked up to be. 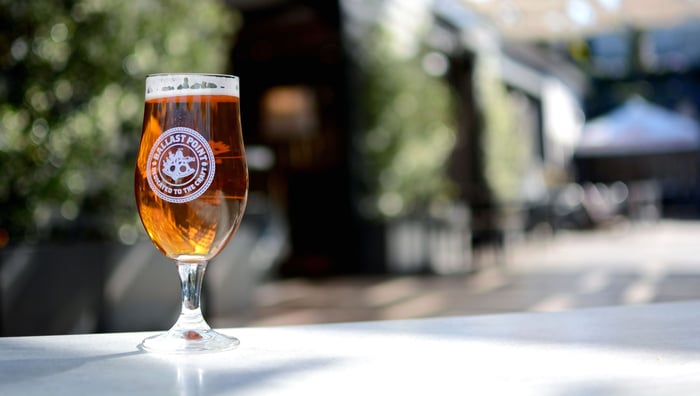 A year of spend-happy deal-making

Constellation offloading its failed takeover is contrary to what has been happening elsewhere in the industry this year. Sam Adams beer parent Boston Beer Company (NYSE:SAM) took over regional producer Dogfish Head for $300 million. New Belgium Brewing -- which was the fourth-largest craft brewer in the U.S. -- sold out to Japan's Kirin Holdings for reportedly $350 to $400 million. And Budweiser maker A-B InBev (NYSE:BUD) came out of acquisition retirement in 2019 with its latest purchase being Red Hook, Widmer, and Kona parent Craft Brew Alliance (NASDAQ:BREW) for $321 million.

The thinking among the biggest beer makers was simple: Take a fast-growing label and supercharge its prospects by plugging it into the new parent company's extensive national distribution channels. After all, one of the limiting factors for small brewer growth is developing those sales channels, which are still governed by a state-by-state and federal distribution licensing network.

But as Constellation just proved, buying a popular new name and taking it mainstream is easier said than done. The strategy missed what many beer enthusiasts already knew: The craft beer movement isn't just anti-corporate beer, it's an entirely new trend in taste.

In many ways, the craft beer movement epitomizes a shift in consumerism toward support of local business and products with provenance -- a story or a face that can be connected with. When corporate beer buys out a craft brewer -- or even when a craft brewer gets too big -- some of that allure is lost. Sure, some consumers get fooled and aren't aware of who's calling the shots. During my tour of Stone Brewing in San Diego, California last year, our tour guide conducted an informal survey of the group to see who knew which "craft" beer was owned by a brewing giant -- like the fact Goose Island is owned by A-B InBev, for example. About half were unaware of who owned what.

That subjective anecdote is besides the point, however. Numbers from the craft industry support group Brewer's Association tell the whole story. Besides drinking local, the craft beer movement is first and foremost about the desire for variety, innovation, and trying new things. Craft beer hasn't caused a boom in consumption. Rather, craft is causing a fragmentation of the industry overall. Not only has corporate beer been put on notice, even regional craft brewers that have gotten too big for their own good are finding life difficult these days.

According to the Brewer's Association numbers released early in 2019, every single one of the top 50 fastest-growing breweries in 2018 were small operations, with those 50 names collectively producing just 170,000 barrels last year (the craft industry overall produced 25.6 million barrels, or 13% of the total U.S. beer market). Total beer sales fell 1% in 2018 according to the research group, and total craft production rose just 4%. Most shocking is that in spite of the tepid craft consumption growth, total brewers in the U.S. rose to 7,450 from 6,596 in 2017 -- fragmentation, indeed.

What does it all mean for investors? It means beer as an investment -- at least here in the U.S. -- is a tough nut to crack. Constellation selling off Ballast Point means it's the smartest mega-brewer around -- the company realized its mistake, admitted it, and moved on. Everyone else trying to buy their way to market share growth is likely to be disappointed, too.