There have been plenty of ups and downs at Etsy (NASDAQ:ETSY) since the online marketplace for arts and crafts and vintage items went public at $16 in the springtime of 2015. We've seen layoffs including a change at the top. However, we've also seen a platform sticky enough to retain loyal users despite a significant hike in fees last year.

The highs and lows are real, but if you were fortunate enough to get in at the time of its IPO, you would be handily beating the market right now. An investment of $5,000 made at the time of its IPO would be worth a little more than $12,659 today. The 153% return in more than four years beats out the S&P 500's comparable gain of 49%. Etsy is naturally riskier than owning a basket of 500 blue chips, but most investors will argue that more than tripling the S&P 500's return since its IPO was a risk worth taking. 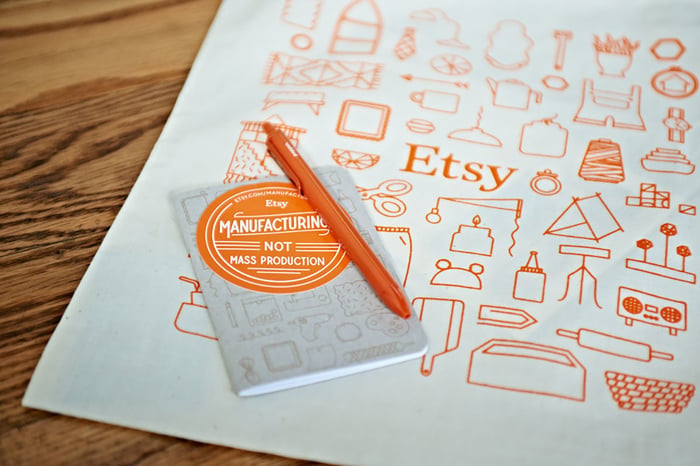 Unless you were chummy with one of Etsy's underwriters at the time of the offering, you probably didn't get in on the IPO itself. It was a hot debutante, nearly doubling to open at $31 on its first trade. That's a pretty big difference. Someone with a cost basis of $31 is only 31% higher right now, losing out to the S&P 500.

However, there are some people who plunked down $5,000 on Etsy sitting on a lot more than $12,659. Despite all of the initial sizzle, Etsy stock was trading as low as $6.04 just nine months after its IPO. Both risks and rewards are high when you invest in an IPO.

Etsy's rough rookie year was fueled largely by Amazon.com (NASDAQ:AMZN) announcing the launch of Amazon Handmade, its own platform for artisans to market their wares to consumers on the leading online retail site. It probably wasn't a coincidence that Handmade launched shortly after Etsy's IPO. Reports of counterfeit vintage items being sold through Etsy also rattled investor confidence.

Etsy survived, of course, but it wasn't easy. It went through layoffs in 2017, and that included the ouster of its longtime CEO. Board member Josh Silverman stepped in as the marketplace's new helmsman, and it was initially a culture clash at a company that was comfortable with outgoing CEO Chad Dickerson's soft-handed approach to business. Silverman ushered in a series of changes, which included a move to boost selling fees in June of last year. There was some initial pushback from sellers on the site over having to pay 5% of successful transactions -- up from 3.5% -- but with Etsy throwing more money at marketing the platform, it proved to be a win-win given the uptick in traffic and sales.

Etsy stock would go on to nearly double in 2017 and more than double in 2018, but it's been a different story in 2019. Etsy shares are trading lower this year, bucking the generally buoyant market after hitting an all-time high of $73.35 in March. Rattling off three consecutive quarters of decelerating revenue growth -- and posting a decline in profitability last time out -- can chill out a stock that had been scorching hot the two previous years, but Etsy is still growing its audience at an impressive pace.