Please ensure Javascript is enabled for purposes of website accessibility
Log In Help Join The Motley Fool
Free Article Join Over 1 Million Premium Members And Get More In-Depth Stock Guidance and Research
By Adam Levy - Dec 11, 2019 at 8:59AM

Last year, Netflix (NFLX 1.98%) CEO Reed Hastings said the video-streaming pioneer's next 100 million subscribers will come from India -- a bold claim considering it had attracted just a few hundred thousand subscribers during each of its first two years in the country, according to estimates.

But Netflix is getting aggressive in the country as it looks to compete with native streaming services like Hotstar, which is owned by Disney (DIS 3.51%), as well as more familiar competitors like Amazon (AMZN 3.66%). To that end, Hastings says Netflix will invest 30 billion rupees (about $420 million) in developing and licensing content for the Indian market over the next two years.

That big content investment follows a move to make Netflix affordable to the average Indian consumer by offering a mobile-only plan for just 199 rupees (about $2.80) per month. The two moves ought to accelerate growth in one of the most promising markets for streaming video. 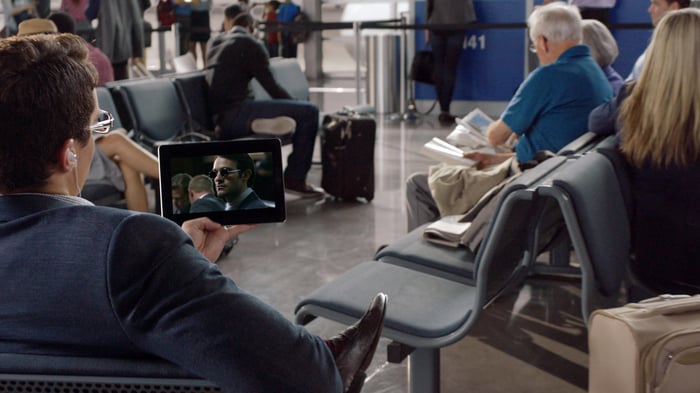 Netflix is well known for spending more on streaming content than just about anyone else. It'll spend about $15 billion this year on a cash basis -- about $9 billion of that will show up on its income statement. While Disney might have a bigger budget for its film and television production, most of that goes toward its theatrical releases and television networks. Amazon has spent $5.5 billion on video- and music-streaming content through the first nine months of the year.

Investing around 15 billion rupees per year on content focused on the Indian market is a pretty sizable investment. That's a 2.5x step up from what KPMG estimates Netflix is investing this year. It's more than twice as much as Amazon said it would spend per year in 2017. Hotstar's spending just 1.2 billion rupees ($17 million) on its originals, although its licensed library including live cricket matches, as well as HBO and Showtime originals, provides a lot of value.

Netflix needs a compelling content library in order to attract consumers to its service. Even at 199 rupees per month for its mobile-only plan, it's still relatively expensive. Amazon Prime costs just 999 rupees per year, and it includes Prime benefits for Amazon's marketplace. Hotstar offers about 80% of its content free with ads, and its premium tier costs just 1,499 rupees per year.

Netflix is hoping to find the right combination of price and content to provide the same kind of value it offers in other markets like the United States. If it can do that, it should be able to grow primarily via word-of-mouth. "We can broaden the audience, they can love that content, enjoy the content that Ted's team is making and that's great because like when we launch Sacred Games season 2 we have a bigger audience," product chief Greg Peters said about its mobile-only plan on Netflix's second-quarter earnings call. "So, what that means [is] we can create more social buzz and more excitement about that show."

Netflix's recent moves in India aren't unfamiliar. The tech company invested billions in content in the United States and other markets while it still offered an exceptionally low price of around $8 per month for its most popular plan. It's increased that price over time as it's expanded its original content library and grown more popular with consumers.

"We change pricing from time to time as we continue investing in great entertainment and improving the overall Netflix experience," management wrote in its fourth-quarter letter to shareholders earlier this year. "We want to ensure that Netflix is a good value for the money and that our entry price is affordable."

Netflix invests upfront in content while keeping prices low. If consumers respond positively to its offerings, it'll come back to them and ask for more money to reinvest in more content.

While Indian consumers may be more price-sensitive than those in more developed markets today, the country is one of the fastest-growing economies in the world. Over time, Netflix should be able to raise prices to catch up with its content investments. And if it reaches Hastings' prediction for 100 million subscribers, a small price increase could mean a significant change in revenue for the company. In the meantime, Netflix's more established markets will subsidize the costs of growth.