Wells Fargo (NYSE:WFC) has gone through a lot in recent years, and the banking giant had an eventful 2019. After having had to deal with multiple setbacks to its reputation, Wells Fargo finally made a big move in the executive suite to bring in an outside CEO. Investors hope that the move will mark a turning point for the bank and start to restore its image with customers and the general public.

Yet even amid all the difficulties that Wells Fargo has endured, it's still been able to give its shareholders solid dividend increases. Having recovered from the worst of the financial crisis in 2008 and early 2009, investors have gotten regular boosts to the quarterly dividends they've received. With light at the end of the tunnel, some shareholders hope that the pace of those dividend increases will speed up. With that in mind, let's look to see whether Wells Fargo is likely to make a dividend increase in 2020.

Getting back on the dividend track

Wells Fargo's dividend track record has been generally good, with the exception of one major setback. Dividend increases at the banking giant and its predecessor financial institutions came at regular intervals, and the early and mid-2000s brought prosperity to Wells Fargo and substantial increases in payouts to shareholders.

Unfortunately, the housing bust and financial crisis that struck in the late 2000s forced Wells Fargo to give up its reputation for uninterrupted dividend growth. By 2009, Wells Fargo had to cut its quarterly dividend from $0.34 per share to $0.05.

Yet it didn't take long for Wells to get back on its feet. The bank asked regulators at the Federal Reserve to approve a capital plan that included higher dividend payouts, and once the central bank agreed, Wells Fargo was able to increase its quarterly dividends quickly. It took only a few years for the size of the dividend to eclipse its high-water mark from before the financial crisis. 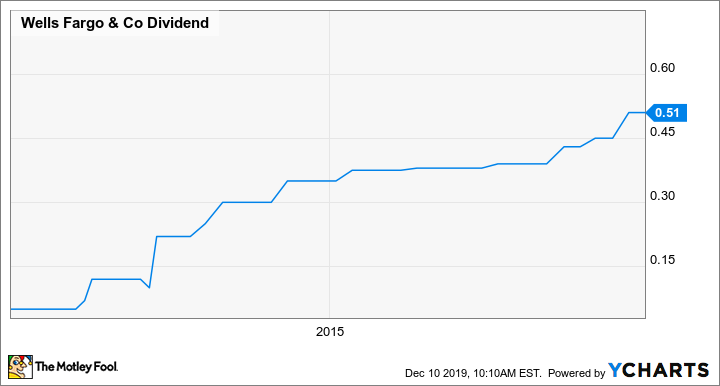 Since then, Wells Fargo's dividend behavior has been mixed. From 2015 to 2017, the bank made only minimal increases, responding to the negative attention it was getting as a result of controversial business practices. Yet in 2018, Wells gave shareholders a boost of more than 10%, and it followed up in 2019 with not one but two separate dividend increases that added up to a 19% hike.

Will Wells Fargo raise its dividend in 2020?

Wells Fargo hopes that the recent appointment of CEO Charles Scharf will help spur a full turnaround. Currently, Wells is still struggling under restrictions from the Fed that limit its ability to grow assets beyond a set ceiling. Investors are optimistic that efforts from Scharf and his management team will eventually persuade the central bank to lift those limitations, helping Wells compete more effectively with its peers.

Unfortunately, the bank is still dealing with the aftermath of the numerous scandals that have plagued it in recent years. In the third quarter of 2019, the company took another $1.6 billion in charges related to legal matters. Even though Wells has done a good job of maintaining the health of its fundamental banking business, ongoing threats of litigation and other liability are still holding the bank back.

In figuring out 2020's dividend policy, Wells will have to look at whether a change in Fed policy gives it more growth opportunities, as well as how Scharf's initiatives play out. In a generally favorable banking environment, Wells has room for another increase of almost 10% to $0.56 per share. But if any more bad news hits the banking giant, then all bets are off for whether Wells Fargo can extend its dividend growth streak to 10 years in 2020.