There's an undeniable upside to Apple (NASDAQ:AAPL) making its own hardware components found within its devices: control. Home-grown tech is guaranteed to work perfectly with the rest of its wares, and the company can develop software and hardware simultaneously. It's this prospect that made Apple's recent purchase of Intel's (NASDAQ:INTC) mobile modem business so compelling. The tech titan is now potentially even more self-reliant.

Except home-grown hardware isn't always all it's cracked up to be. Doing your own research and development (R&D) can get very expensive (and tricky), particularly if that sort of research isn't part of the company's normal course of business. Just ask Apple CEO Tim Cook, who spent several years refining the third-party supply chain he's now starting to displace.

It wasn't exactly a shock when Intel announced in early December that it had completed the sale of its smartphone modem business to Apple for a fairly modest $1 billion. The deal was forged and publicized back in July. Still, it's Apple's baby now -- for better and for worse. The "better" is absolute control of this aspect of its smartphones. The "worse" is the corresponding headache. 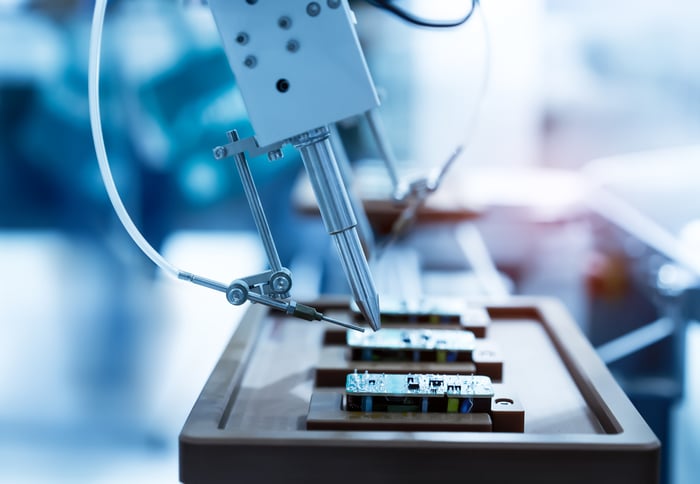 Most investors likely won't recall, but when the late Steve Jobs hired Tim Cook away from Compaq in 1998, Jobs named him senior vice president of worldwide operations primarily to simplify Apple's component sourcing and dramatically reduce the length of time it took the company to bring a computer to the market. Apple wasn't making even the majority of its own hardware and tech in the late '90s, but to the extent it was, Cook steered the company out of the manufacturing business. When all was said and done, at the time it was easier to apply pressure to external suppliers, forcing them to compete with one another by dangling the hefty carrot of being an Apple supplier in front of them. Indeed, until earlier this year, Intel wasn't Apple's only third-party supplier of modems; Qualcomm still made some of them. Now that leverage is vanishing, with the company opting for absolute control of its modem development and supply.

And if it were just modems, it wouldn't be a terribly noteworthy development. But it's not just modems. In August 2018, Apple purchased augmented reality hardware company Akonia Holographics. In 2015, it acquired home networking technology chip specialist Lantiq. Credible rumors have also surfaced that Apple is mulling the manufacture of its own ARM-based processors for Mac computers, hiring designer Mike Filippo (formerly of SoftBank-owned ARM Holdings) earlier this year. And, the tech titan has purchased at least a couple dozen companies over the course of the past year. Most of the recent ones are software names -- at least among the ones we know about -- and more often than not the targeted company is relatively young and may need an infusion of cash to keep operating.

Putting all the subtle clues together leads investors to at least one conclusion: Apple is increasingly interested in handling more of its own tech-development duties.

Peers are spending a pretty penny on R&D

Switching gears now isn't inherently wrong. Twenty years ago, the utilization of contract manufacturers may have made the most sense. Now, with access to better testing, research, and fabrication tools, many tech companies can do more for themselves, gaining control that simply wasn't possible before.

The shift does raise the question of when and where doing your own R&D pays off, though. If the cost of development pays for itself, Apple's move is brilliant. But if hardware research and development requires selling that work to any and all buyers -- like Intel, Qualcomm and ARM Holdings do -- the strategic shift could eat into profit margins. Remember, Apple -- for the time being, anyway -- is focused on making chips for itself.

And should the relative ramp-up in spending materialize, it could get surprisingly expensive. Microsoft spent 25% of its revenue on R&D last year. Alphabet spent more than 15%. For Samsung, the figure is a tamer 7%.

And Apple's proportion of revenue that's been spent on research and development? Last fiscal year it was roughly 6%, up from 5% for the two years prior. Curiously, Apple only spent about 3% of its sales on R&D in 2014, before it turned up the heat on dealmaking. 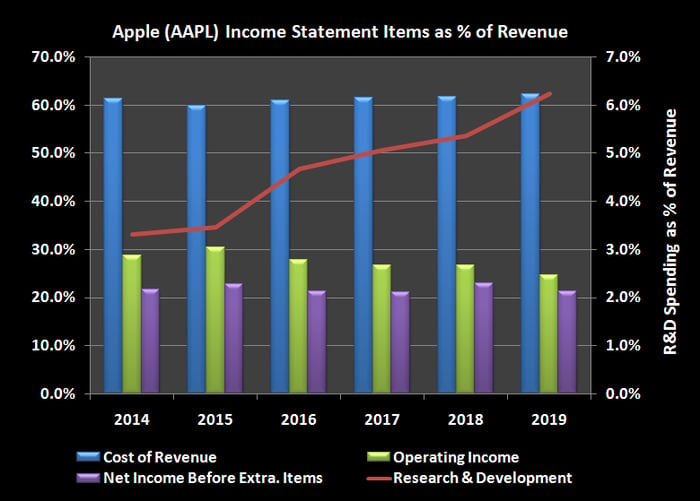 That trend raises the question of just how much more Apple will need to spend on research as it wades deeper into growing its own hardware and software capabilities. Longer-term, it raises questions regarding the potential for Apple to become a major IP licensor.

It's not necessarily a stumbling block. If rising R&D costs are more than offset by a decline in its cost of sales, then Apple's new strategy will have been worth it. That's where the markup on research done by suppliers would be found.

We've not seen that happen yet, though. In fact, the cost of sales is also rising in step with Apple's rising developmental spending, driving operating margin lower for the six-year stretch. Overall net income has remained stable at around 22% of revenue, but one would have liked to have seen margin growth from Apple sooner or later. That's especially true given that margins on digital products like apps and entertainment content are higher than hardware profits.

It's not a deal-breaker yet, but it's one of those overlooked matters that even the most bullish of Apple shareholders will want to keep on their radars.