Please ensure Javascript is enabled for purposes of website accessibility
Log In Help Join The Motley Fool
Free Article Join Over 1 Million Premium Members And Get More In-Depth Stock Guidance and Research
By Grace Williams - Dec 13, 2019 at 8:15AM

Biotech can be a risky sector for those interested in healthcare stocks, but Amgen has found a way to manage the risk and reap the rewards.

Because they are always dealing with complicated regulations, patents, recalls, and fierce competition, biotech stocks can feel like risky investments. Many biotechs try to tackle some of the world's most complex health problems, where a single success could mean life-changing advancements, but a single failure could mean total financial ruin.

But even a risk-averse investor can still own shares in biotech stocks, given the right set of circumstances. One solid example that this type of investor might consider is genetics-based drugmaker Amgen (AMGN 1.11%).

Knowing what to look for or what constitutes a sound company in this sector is not easy, but there are a few key factors that can tell investors a lot about the company. For the long-term risk-averse investor, a biotech worth a second look is one that innovates beyond its competitors, dominates a certain segment of the market, and/or can prove its stability by reporting strong earnings, paying dividends, announcing buybacks, or reinvesting into the company to further its progress.

While this company is still susceptible to larger industry concerns, Amgen fits this description. In the last few months, it has made some big advancements that are sure to pay off for the company (and for shareholders). Here are three reasons why Amgen shows great promise for the long term, potential risk and all. 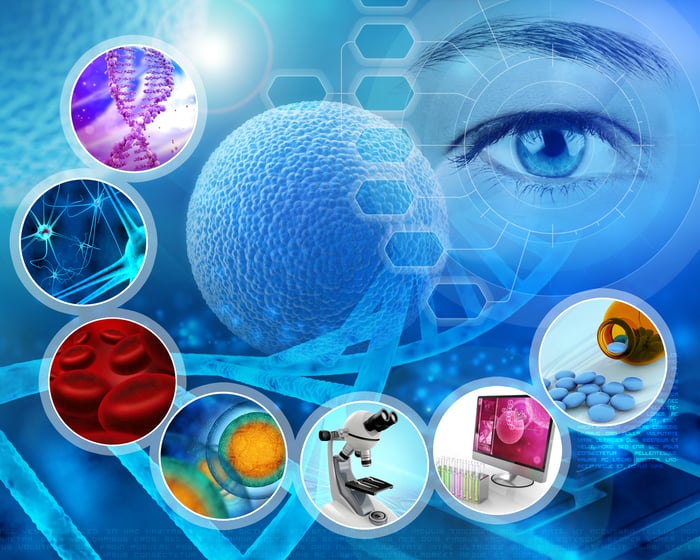 1. A robust pipeline with a purpose

Many biotechs make their name off one blockbuster drug they have developed. Amgen has opted to branch out into different directions through its years in business, which has resulted in several blockbusters in the process.

Over time, Amgen has developed medicines and treatments to manage chronic conditions such as anemia, arthritis, and other autoimmune diseases. Amgen also focuses on drugs that treat cancer and diabetes patients, and it develops drugs for patients in higher-risk categories for cardiovascular disease and heart attacks.

In the company's most recent earnings report in October, Amgen Chairman and CEO Robert Bradway talked about the company's initiatives to stay "ahead of the curve and position ourselves for sustained long-term growth." In anticipation of pressure on drug pricing, the company highlighted innovative medicines it produces that demonstrated the potential to grow over time.

Bradway said Amgen saw brands such as Prolia (used to treat osteoporosis in postmenopausal women), Repatha (a cardiovascular treatment), and Aimovig (a migraine treatment) generate double-digit volume increases in the quarter, adding, "This is the seventh quarter in a row that we've reported volume growth globally."

The biotech's emphasis on treating a wide variety of ailments and conditions has resulted in several best-selling treatments, meaning the stock is less dependent on a single product to drive sales.

Mergers and acquisitions (M&A) happen frequently in the biotech sector and can be a great way for a company to expand its reach. Recently, Amgen has announced some headline-making moves that added to its pipeline.

In addition to traditional drugs, Amgen also invests in other specialty treatment markets, such as the one that has developed around the skin disorder psoriasis. In August, Amgen announced the acquisition of Celgene's popular psoriasis treatment, Otezla, for $13.4 billion. At present, Otezla is the only treatment of its kind for psoriasis patients, in that it is taken orally in pill format rather than the more commonly used injection. Otezla is approved in 54 countries and earned $1.6 billion in sales in 2018. Meanwhile, Amgen projects at least low double-digit sales growth for the product over the coming five years.

More recently, Amgen also announced it will acquire a 20.5% stake in BeiGene (BGNE 4.29%), a Chinese cancer treatment developer. BeiGene has plans to sell three cancer treatments in China, which is estimated to be the second-largest oncology market. Amgen faces a lower barrier of entry to this market than many of its competitors because BeiGene already has access to over 800 hospitals in China.

3. The numbers that tell the rest of the story

Earnings tell us a lot about where the company has been and where it might be headed. From what we can tell from recent earnings, Amgen looks to be on solid footing. On Oct. 29, Amgen released third-quarter results that added to its already impressive streak of EPS and revenue forecast beats. Management also raised its full-year revenue and EPS guidance.

To be sure, there is some speculation that Amgen possibly overpaid for Otezla. The company also faces potential pressure from competitive biosimilars (brand name products that are highly similar to an already existing brand name but, unlike a generic drug, are not identical). Even so, shares continue to move at a steady clip, up to a 52-week high in early November.

One final box that should help assuage risk-averse investors comes in the form of shareholder rewards. Amgen is a winner in this department. The company pays an annualized dividend of $5.80 per share, which represents a dividend yield of roughly 2.7%. In the third quarter of 2019, Amgen repurchased $1.2 billion in stock and plans to repurchase a further $1.0 billion-$1.5 billion in stock in the fourth quarter.

At 39 years young and on the basis of its well-known treatments, new demographics, and territory coverage (courtesy of its acquisitions of BeiGene and Otezla), Amgen is providing investors with a proven long runway and sound footing, compared to many of its upstart -- and often unproven -- competitors. Amgen is also worth it for the long-term investor because of the green shoots phases of its M&A activity. The company remains on a steady climb and rewards investors over time thanks to the promising roster of treatments in its pipeline. Look into it for yourself.