Beauty retailer Ulta Beauty (NASDAQ:ULTA) finally gave investors a much-needed glimmer of hope last week. Its third-quarter bottom-line results came in better than expected, with same-store sales improving to the tune of 3% year over year, in line with expectations. Part of the big 11% post-earnings surge following the report has since been given back, though that's not a key cause for concern; the big gain encouraged some profit-taking once the buzz wore off. The foundation for a more prolonged recovery appears to be taking shape.

But before investors decide to plow back into the beaten-down name, they may want to take a step back and look at the bigger cosmetics picture. The entire industry is in the midst of a couple of paradigm changes, both of which are working against Ulta. Its CEO even made a point of saying as much when discussing the results.

The quarter was strong enough. Same-store sales were up 3.2%, and though the top line fell short of estimates, total revenue grew 7.9% to $1.68 billion for the three-month stretch ending in October. That, along with upped guidance, gave would-be buyers something to latch onto following decided weakness after the release of the previous quarter's figures. The past and projected numbers are also part of a bigger -- even if occasionally uneven -- growth trend. 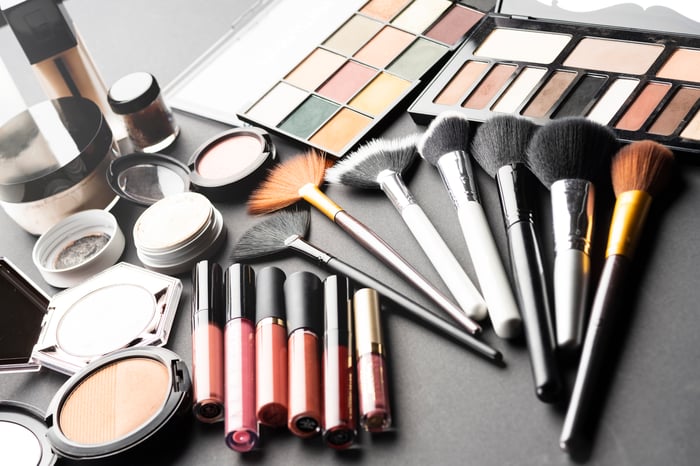 CEO Mary Dillon threw some shade on the company's upped outlook, though, curiously cautioning that "growth in the overall U.S. beauty industry continues to be constrained by softness in the makeup category. We continue to believe that the headwinds facing the makeup category are largely cyclical, resulting from a lack of incremental innovation and compelling newness." She added that they "remain confident that the makeup category will return to growth, but recognize that it will take time."

Translation: The foreseeable future could be wobbly, so buckle up.

It's an unusual (though not unheard of) move from a CEO to paint anything but a glowing picture of the future. So, to broach the topic at all is a hint in and of itself. She's not wrong, however. If anything, she understated the cyclical headwind and all of its root causes.

Chief among those challenges is a consumer base that's falling out of love with the use of cosmetics -- again -- led by the same celebrities that spurred fresh demand for makeup just a few years ago. The no-makeup selfie is en vogue now, inspired by A-listers like Beyonce and Gwyneth Paltrow. The movement has been potent enough to be at least part of the reason the color makeup (sometimes called prestige makeup) industry's total sales fell 7% during the third quarter of the year.

The undertow worsens before it improves, too. Teenagers, who have historically been crucial growth drivers, are particularly losing interest. A recent Piper Jaffray survey determined cosmetics spending by Gen Z was down to the tune of 20% this year.

Ulta Beauty isn't just cosmetics, of course, but to the extent it offers skincare and other products, it's still facing the same threats that so many other retailers did when Amazon.com entered the mix. It's simply more convenient, and sometimes cheaper, to shop online. The only difference between then and now is, it's even easier now for a brand to sell directly to a consumer. As Wells Fargo analyst Ike Boruchow put it, "We believe that slowing cosmetic trends and shifting industry dynamics will meaningfully pressure the business, even as they generate robust comps for the broader retail space."

There's no clear picture as to when the headwind will become a tailwind again, or when Ulta will learn how to thrive after the current cyclical reset of sorts.

Dillon's concern about the "lack of incremental innovation and compelling newness" is duly noted, but knowing the problem doesn't solve the problem (or problems). Ulta is still largely subject to industrywide demand, and can only hope it doesn't have to end up competing with its own vendors, who may be just as apt to sell their wares through more conventional consumer staples names like Walmart.

The downcycle will end. That's the good news. Like fashion trends and health trends, beauty trends repeated themselves. Erinn Murphy, senior research analyst at Piper Jaffray, believes the industry is nearly three years into a cycle that tends to last about four years. That puts the "turn" sometime into next year, or perhaps the year after that, depending on when brands finally start to innovate the way Mary Dillon says they're not at this time.

The period between now and then, however, could be rough as brand names finally come face to face with the fact that their approach and product lines just aren't connecting with consumers. Mary Dillon seems to know that time is the only thing that will abate the headwind. Wells Fargo's Boruchow gave the most apropos warning for would-be Ulta shareholders during that time, saying the uncertain backdrop would make Ulta stock "highly debated stock in the near-term." Analysts have underscored his concern with tepid income projections despite ongoing revenue growth. 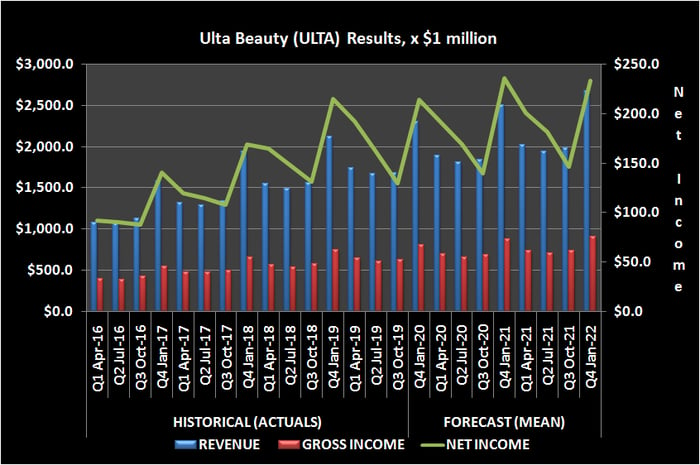 There are an awful lot of other, less-debated stocks to choose from while Ulta Beauty finds its footing.