Please ensure Javascript is enabled for purposes of website accessibility
Log In Help Join The Motley Fool
Free Article Join Over 1 Million Premium Members And Get More In-Depth Stock Guidance and Research
By Lou Whiteman - Dec 13, 2019 at 11:10AM

A postelection rally on the hope that Brexit uncertainty is finally moving to the rearview mirror.

Shares of Royal Bank of Scotland Group (NWG -0.72%) traded up more than 10% on Friday morning, part of a broader rally in British stocks following the Conservative Party's election victory in the United Kingdom. The vote should relieve much of the uncertainty surrounding Brexit and caused the British pound to strengthen.

U.K. banks, including RBS, have been mired in the uncertainty surrounding Brexit and concerns that the confusion would be extended indefinitely if Conservative rival Labour won the election and followed through with its campaign promise to hold a second Brexit referendum. The Conservative victory put those fears to rest, with Prime Minister Boris Johnson now having the solid majority he needs to take the United Kingdom out of the European Union ahead of a Jan. 31 deadline. 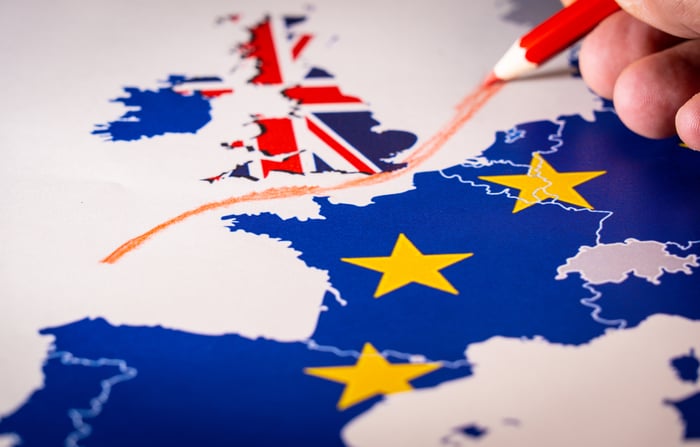 Investors continue to debate whether Brexit is good or bad for the British economy and banks in particular, but one thing all parties seem to agree on is that the uncertainty over the outcome has been bad for business because it has weakened the U.K. currency and made it impossible for banks and other U.K. businesses to do long-term planning. Friday's RBC price jump, and the broader FTSE 250 rally, seems to be on relief that for better or worse we will soon have a resolution.

With Brexit seemingly finally drawing near, it is time to start valuing Royal Bank of Scotland on its own merits and not on macroeconomic concerns. The company had its problems earlier in the decade and has struggled to get back on its feet. RBS this summer warned it is "very unlikely" to hit its 2020 costs and return-on-equity targets due to market conditions, the tight yield curve, and, of course, Brexit.

Even if the Brexit issue is resolved, the United Kingdom is about to enter uncharted territory in leaving the EU, and the risk of economic disruption, or at least a short-term slowdown, seems high. RBS is shooting higher today, but for long-term investors there are better bank stocks to buy right now.