Virtual reality (VR) and its close cousin augmented reality (AR) have been "next year's big thing" for several years in a row, failing time and again to create the public frenzy -- or the revenue -- that these technologies would be expected to create. In fact, the disappointment has become so perennially reliable that even the most die-hard AR and VR supporters have finally started to temper their optimism.

The irony? Next year might actually be the breakout year for practical -- and marketable -- applications of augmented and virtual reality technologies.

That swell of AR and VR solutions demand should prove a boon to several tech companies in and around the business. It's Facebook (NASDAQ:FB), though, that's still best positioned to capitalize on the opportunity. It won't be an outright game-changer for the company, but it could be enough to take the edge off any rough spots in Facebook's foreseeable results.

It was IDC that made the call late last month, suggesting total spending on augmented and virtual reality would grow a little more than 78% next year, reaching $18.8 billion. Better still, the technology market research house forecasts that the compound annual growth rate for the next five years would be 77%, which would put the AR/VR market size on the order of $200 billion by 2024. 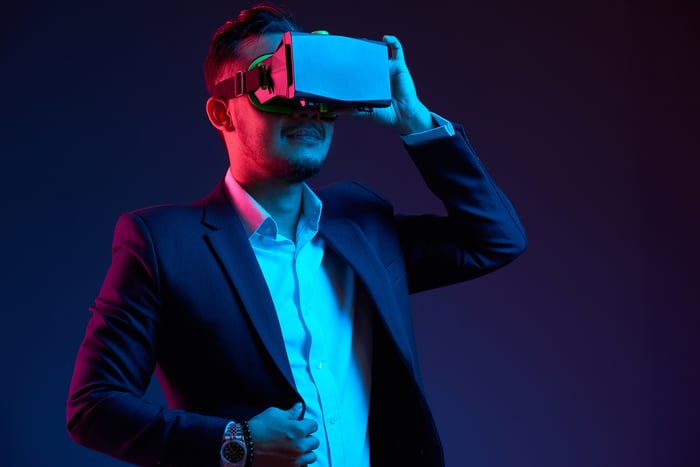 The numbers certainly qualify 2020 as the pivotal year so many have been waiting for, if they pan out. Investors have heard the hype before, only to see Alphabet all but abandon work on Google Glass while smartphone makers have largely dropped support for making their wares the powerhouse of VR headsets.

IDC's outlook feels like it holds some water all the same though, as the underlying technology necessary to get the most from beyond-reality experiences has finally caught up with the premise and promise of augmented/virtual reality itself. Namely, developers have found ways to make VR and artificial intelligence work together in a way that actually matters beyond mere novelty.

Most investors may not fully appreciate that Facebook is more than just the owner of Oculus, the brand behind this year's second-best-selling VR headset, according to TrendForce. Namely, Facebook Reality Labs (FRL) is doing some of the most cutting-edge work in the arena that may end up being more marketable than Sony's market-leading but mostly gaming-oriented gear. While it too wants to offer entertainment options, Facebook has been encouraging software developers to create more practical uses of its hardware.

Case(s) in point: A year ago, Facebook made its DeepFocus AI rendering system freely available. The platform not only lets hardware figure out where and what objects may be in a room, it also renders that image for human eyes the way a human eye would normally see them. In the middle of this year, FRL released a piece of similar software called AI Habitat, and another called Replica, that allow for intelligent navigation of a virtual space.

The practical-use question of all the VR tools Facebook has developed or acquired still remains a bit elusive, though the distance between the tools' capabilities and genuine life improvement is shrinking.

In the meantime, while Facebook is getting better at the more difficult VR challenges, the easier hurdles are being readily cleared. Just this week, Oculus released hand tracking for its relatively new Oculus Quest headset, negating the need for a physical hand-controller that feels like something between a mouse and a joystick. Initial reviews are positive.

All of these little things have added up to drive a sizable leap in the functionality of virtual reality in just a couple of years.

Evidence of that leap comes in the form that investors want to see most: numbers. Nielsen's SuperData Research arm recently reported that since Oculus' affordable Quest headset hit the market in May, VR hardware spending has grown to the tune of 31% this year. That's still only $2.1 billion, but the next generation of virtual reality hardware is still in its infancy (if it's even available yet). In other words, the VR market isn't out of the turn. It's in the midst of the turn.

SuperData Research also notes that VR spending growth is being supplied by consumers and corporations alike as more practical-use concerns are addressed. That nuance jibes with IDC's long-term outlook, which suggests that commercial usage rather than consumers will drive the bulk of the expected growth from here. IDC also believes VR will fare better than AR in terms of revenue, better playing into the VR hand Facebook has been building for itself.

Again, the mainstreaming of VR isn't going to drive the kind of growth Facebook enjoyed shortly after its social networking site became a digital centerpiece several years ago. It's sharing the VR and AR space with other players, and 2020's expected $18.8 billion worth of AR and VR hardware spending is still only a fraction of Facebook's typical annual revenue.

The convergence of the right hardware and software developments is just now starting to reach a critical mass, though, and Facebook's Oculus -- and the Oculus Quest in particular -- look like the leaders of the market outside of Sony's gaming-oriented share. In fact, Facebook has managed to steal VR hardware share from Sony this year, from 19.4% in 2018 to 28.3% as of TrendForce's most recent look. Sony's share has fallen from 43% to 36.7%.

That's a pretty good start for Facebook as we, hopefully, head into virtual reality's breakout era.

Will 2020 Finally Be the Year AR and VR Matter for Facebook? @themotleyfool #stocks $FB Next Article
Current