Those of us who follow or are involved in the virtual reality (VR) industry have been waiting for the day when a high-end headset without wires would finally arrive. That day is here, now that Facebook's (NASDAQ:FB) Oculus has launched the Quest.

The $400 headset comes with two controllers and a charger, but none of the cords or complex setup instructions that previous devices have had. Affordable and wireless were two barriers to entry that kept many consumers from jumping into VR.

Here's a look at where the Oculus Quest is a giant leap forward and where it has room for improvement. 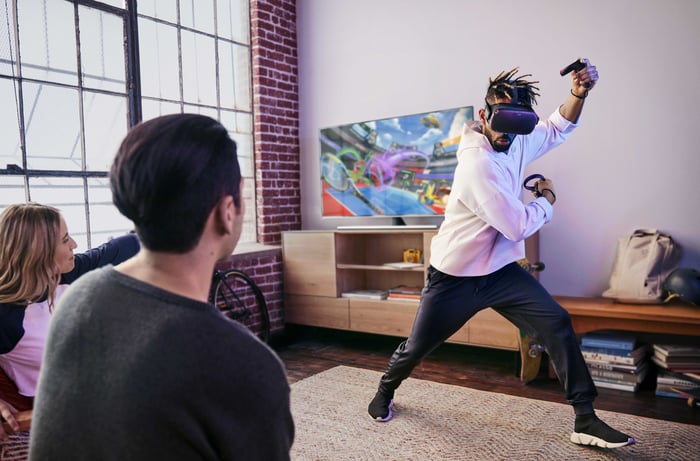 Where Quest is a WOW device

Unlike most VR devices, the Oculus Quest is insanely easy to set up. There aren't any lighthouses to setup, and there's no bouncing in and out of the headset to designate the physical boundaries for your VR space.

When you begin setup, you can see the outside world through the built-in cameras on the headset, and the system determines where the floor is before you "draw" your virtual boundaries. What's most impressive about the setup is how quickly the system transitions from VR to camera mode. Simply walk through the virtual grid and the camera turns on again, making it difficult to run into walls or other objects if the system is set up correctly.

From setup to controllers to the user interface, Quest is a simple device for consumers to use, and that's critical for the VR industry right now. HTC Vive and the Oculus Rift, which run on PCs, are clunky and need a lot of troubleshooting to operate. If Quest can remove that headache, it'll be a big win for the device.

Oculus has always had simple and intuitive virtual hand controls, and Quest is no different. Squeeze the gripper button and you make a fist, point your pointer finger and your virtual hands do the same. This makes it easy to know how to pick up and throw things in VR, which isn't the case with every controller.

When testing the Oculus Quest, I was most impressed with the tracking of controllers. Inside-out tracking -- where the headset tracks the outside space -- doesn't cover the full 360 degrees that controllers can travel, so if there's a lag or glitch when controllers come back in sight it can break the immersive experience. Quest does a remarkably good job at tracking controllers, which can't be said for Microsoft's inside-out tracking system, even though it was PC-powered. 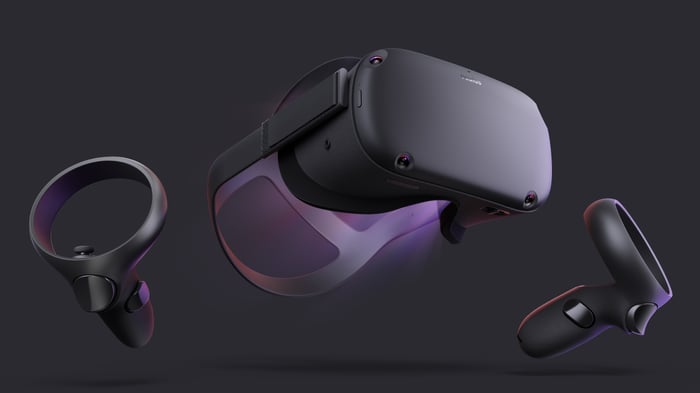 As great as Quest is, there are naturally some compromises that need to be made to hit a $400 price point. The most noticeable out of the box is the device's construction. Quest's head strap and controllers just aren't as rugged as those used by the HTC Vive, and the headset itself has very few adjustment options. The fit on a person's head is critical: As someone with a large head, I've already noticed that the device won't fit on me as well as it might on most people.

There are also performance-quality compromises that needed to be made, given the price point. Instead of a high-end NVIDIA graphics card that most VR systems run on (which can cost $800 by themselves), it uses a Qualcomm chip originally designed for smartphones. The chip simply won't render as many frames per second or the quality of a better graphics card. So developers make compromises -- like Beat Saber reducing the texture on its sabers and walls -- giving the game a much flatter look. These are noticeable to experienced users but are going to be the compromise needed to make the Quest affordable.

As good as hand tracking is on Quest, it's still not as good as higher-end devices. There's a small lag in games, and the loss of tracking when a controller goes out of sight is noticeable.

For a new VR user, these issues may not be a big deal. For those experienced in VR, the issues are noticeable, but they're also the cost of entry for Quest in the mass market.

The ultimate unknown is whether or not the Oculus Quest will sell. The Oculus Rift sold just 130,000 units in Q4 2018, according to SuperData, which is an anemic level for an emerging technology. Quest should boost those numbers, but we don't yet know by how much.

VR needs to increase headset sales by an order of magnitude or more to build a long-term, viable business, which would drive further investment in content and hardware. But the first step is making Quest a success.

Oculus has done what it can to make Quest a compelling product for early VR adopters; now the distribution channel and sales and marketing teams need to move product off the shelf. Time will tell if that happens at the pace that the VR industry hopes.