After three years of being in the doldrums, the firearms industry is finally showing signs it is on the rebound. The number of criminal background investigations being performed by the FBI on potential gun buyers -- and adjusted to eliminate the administrative checks performed each month by state police agencies -- rose for the seventh consecutive month.

Although the rate of November's increase was one of the smallest increases this year, it still holds the promise of representing a big Christmas present for the gun industry: The FBI says it performed almost 203,000 background checks on Black Friday alone, the second-greatest number it has performed in a single day, bested only by Black Friday in 2017. 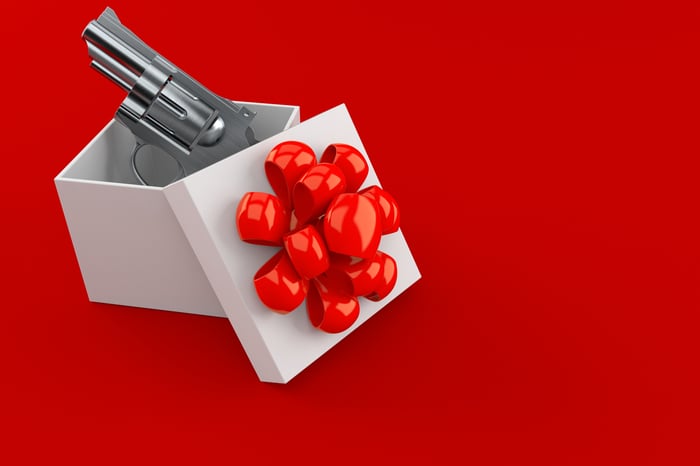 Gun sales are good but not great

American Outdoor Brands (NASDAQ:SWBI) reported fiscal second-quarter earnings last week that beat analyst expectations on the top and bottom lines. Although its results were much worse than the year-ago period, they represent a sequential improvement, indicating the industry might have reached an inflection point.

There are still several reasons investors shouldn't overshoot the mark in forecasting the potential upturn, but it's clear the gun industry is moving in the right direction once more.

FBI raw data shows criminal background checks in 2019 are on pace to break all records, standing at 25.5 million checks, or 3% greater than 2016, the previous record year when fear-based gun buying was at its height. But those numbers give an inflated view of the situation.

As noted above, many states perform administrative checks on existing concealed-carry permit holders to see if they're still eligible to have a permit. Several other checks also tend to double count background checks.

The National Shooting Sports Foundation (NSSF) trade group analyzes the FBI data and eliminates those duplicate checks to arrive at a number that's more representative of true gun-buying demand. It's not a 1-to-1 ratio for gun purchases, since some buyers might purchase more than one gun, not purchase a gun at all, or even get denied, but it is a close approximation of the marketplace.

According to the NSSF, year-to-date adjusted background checks total around 11.6 million this year, or less than half of what the FBI's raw data shows. More important in regard to the superlatives being tossed around for 2019's results, that number is still 16% below 2016's. It is also 2% below what was notched in 2015 and only marginally ahead of last year. 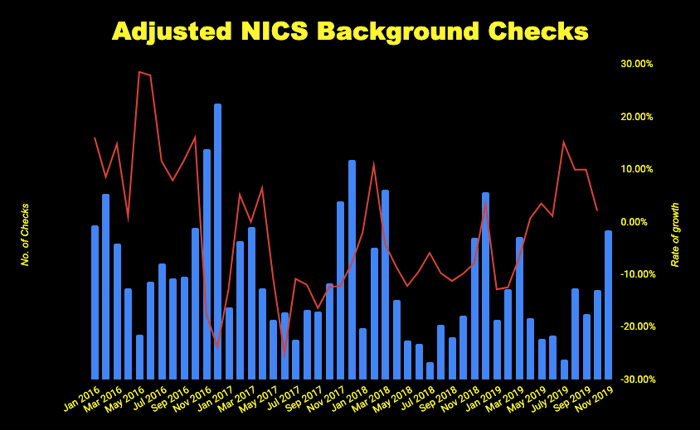 While the industry is in a better spot than it has been lately, firearms manufacturers still have a ways to go before they're truly healthy again. That's because much of the gain the industry is seeing this year -- and what made a lot of buyers shop for guns on Black Friday -- is being driven by the discounting of firearms by dealers.

During American Outdoor's earnings conference call with analysts, CEO James Debney said it indicated people want a great deal before they'll buy, so "we have a strong promotional strategy as well, which we think is very appropriate in this environment."

It's why Sturm, Ruger's (NYSE:RGR) earnings results, given last month, were comparatively worse and led to its stock getting battered. Ruger doesn't really participate in heavy promotional activity around its guns and is willing to give up a few points of market share to preserve its profit margins.

President and CEO Chris Killoy said, "Once again, we elected to forgo opportunities to generate better short-term results with overly aggressive discounting and promotions and the extension of payment terms, which would hinder our long-term performance, value and brand."

Where Ruger's firearms sales fell 17% year over year, American Outdoor recorded a 1.7% gain. But it's important to note neither Ruger nor American Outdoor sells direct to the public; both have a two-step process of only shipping their guns to federally licensed dealers and retailers, who in turn may sell to the public. So quarter-to-quarter fluctuations might occur based on how much inventory the dealers have rather than on the public's appetite for buying.

Discounts or not, the fact that gun buyers are back in the market is good news for manufacturers and investors. The stocks of both major gunmakers are down from the highs they hit in 2016 and have fallen further still in 2019.

The Black Friday rush was not something only department stores and clothing retailers experienced this year. Gun buyers were out in force, too, and firearms manufacturers might just have a very merry Christmas.