Enbridge (NYSE:ENB) announced its 2020 financial guidance this week. One of the highlights was that it plans to increase its dividend by another 9.8% next year. It will mark the energy company's 25th consecutive year of raising its payout. That puts it into an elite class as that's one of the main characteristics of a Dividend Aristocrat.

With that raise, Enbridge's dividend yield will go up from its currently well-above-average level of 5.7% to an even more attractive 6.3%. Not only is that a sustainable level for the company, but it should continue to grow at a healthy rate for the next several years. 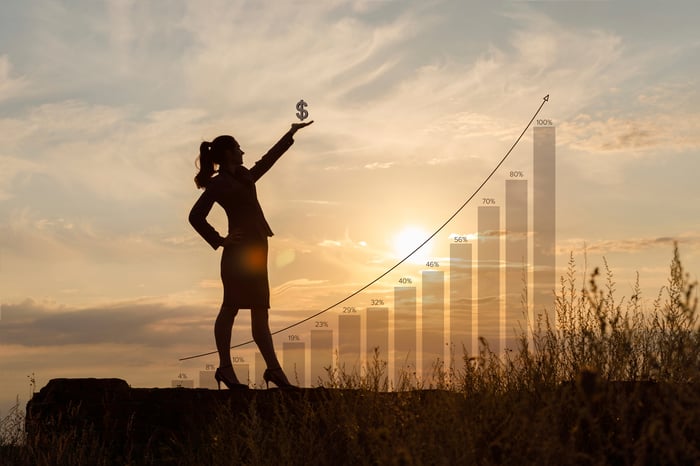 Giving its investors the royal treatment

Enbridge has been an exceptional dividend stock throughout the years. The Canadian pipeline giant has paid dividends to its investors for the last 65 years, increasing it in each of the past 25 years. Furthermore, it has grown its payout at a healthy rate of 11% compounded annually during that time frame.

That consistent dividend growth has given Enbridge the fuel to generate excellent total returns. Since 1995, the company has produced a total shareholder return of 15.8% per year, which has significantly outpaced the S&P 500's 10% total annual shareholder return during that period.

All the fuel needed to keep growing

Enbridge fully expects to continue to boost its dividend in the coming years, aiming to expand it by 5% to 7% per year after 2020. Two factors drive that outlook.

First, the company has a solid financial profile. The foundation is its predictable cash flow, as 98% of its earnings come from stable fee-based contracts or cost-of-service agreements. Meanwhile, the pipeline company will have a solid dividend payout ratio of 70% in 2020, which it sees declining toward its long-term target range of 65% in the future. Finally, it has a strong investment-grade balance sheet backed by a leverage ratio at the low end of its target range. These factors give it the financial flexibility to continue growing its dividend even as it invests in expanding its pipeline empire.

Enbridge currently has 11 billion Canadian dollars ($8.3 billion) of expansion projects under construction that should drive its growth through 2022. However, in its view, it can self-fund between CA$5 billion and CA$6 billion ($3.8 billion to $4.5 billion) of expansion projects per year, suggesting that it has some additional flexibility to add to its near-term backlog. That combination of visible growth and optionality drives the company's view that it can grow its cash flow per share by 5% to 7% per year after 2020.

The company has several additional expansion projects beyond its secured backlog in development to help drive future growth. For example, it recently signed letters of intent to form joint ventures that will develop export-related infrastructure along the U.S. Gulf Coast. One project would build a new offshore oil export terminal while the other would construct a natural gas pipeline to feed an LNG export terminal. Also, the company has several European offshore wind farms in development as well as additional natural gas and liquids pipeline projects in the U.S. and Canada in the works. With such a large slate of identified opportunities, it should have no problem expanding in the future, which should give it even more fuel to continue to grow its dividend.

Enbridge is joining an elite group by increasing its 2020 dividend as that will mark the 25th consecutive year that the Canadian pipeline company has given its investors a raise. There will likely be plenty more dividend increases ahead, given its solid financial profile and visible growth prospects. Because of that, it's one of the top stocks out there for income-seeking investors.