It's easy to think of stocks that would benefit from federal marijuana legalization in the United States. Obviously, the cannabis operators that are already doing business in states that have legalized medical and/or recreational marijuana would be on the list. So would Canadian companies champing at the bit to expand into the U.S. market.

There are also the stocks of "picks and shovels" companies that supply products and services to the U.S. cannabis industry. Stocks such as Kushco Holdings and Scotts Miracle-Gro fall into that category -- and they'd almost certainly soar if marijuana was legalized at the federal level in the United States.

But there's a blue-chip stock that you'd probably never guess would also profit from U.S. marijuana legalization. This company has been in business for more than 130 years. It ranks as one of the biggest healthcare stocks on the market. Believe it or not, this surprising stock that stands to benefit from the legalization of pot is none other than... Abbott Laboratories (NYSE:ABT). 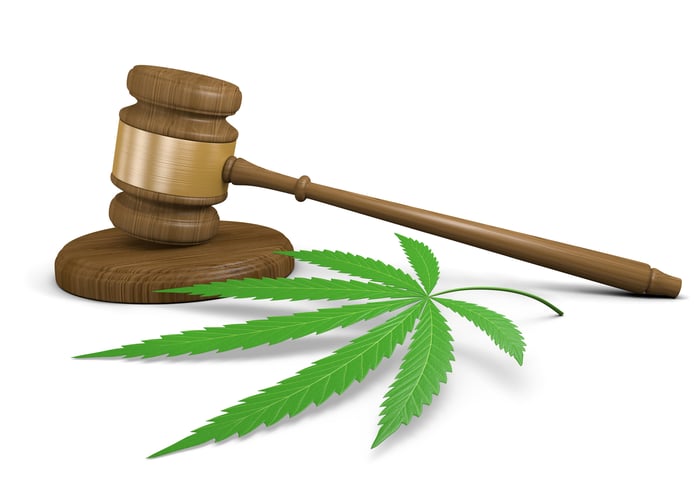 A big problem with legalization

Some look at U.S. marijuana legalization and only see dollar signs. The cannabis industry is already becoming a big business. If pot were legal at the federal level, it would become a huge business -- making money for investors and generating tax revenue for state and local governments. But the legalization of marijuana also creates some problems.

One such problem was highlighted recently by a survey conducted by Atomik Research and commissioned by Abbott. This survey found that 64% of Americans are concerned about the possibility of higher numbers of accidents from drivers under the influence of marijuana that could result from the legalization of recreational pot.

There's a good reason for those concerns. More than one out of five survey respondents personally knows someone who has been in an auto accident that was caused by a driver who was under the influence of drugs. Forty-two percent stated that they know someone was has driven a vehicle "soon after taking drugs."

The Abbott/Atomik Research survey isn't an outlier. AAA's Foundation for Traffic Safety survey found that 70% of respondents think that it's dangerous to drive within the first hour after using marijuana. And the issue of drug-impaired driving is serious enough that it was a key topic addressed at the International Association of Chiefs of Police Conference held in Chicago in October.

This problem existed even before states began legalizing marijuana, of course. But the potential for more legalization in states -- and especially the legalization of pot at the federal level in the U.S. -- exacerbates the issue.

But with every problem, there's an opportunity. To help address the issue of driving while under the influence of alcohol, breathalyzer tests were developed to detect the level of alcohol in a driver's blood. These tests help law enforcement officers. And since drivers know that the police have breathalyzers, it can cause them to think twice before driving after drinking alcoholic beverages.

Although many law enforcement agencies currently use blood and urine tests to determine if a driver has used drugs, it can take several hours for the results from these tests to come back. Law enforcement really needs technology that allows them to immediately detect levels of drug use in drivers at the roadside in a similar way that breathalyzers allow them to quickly know if a person was driving under the influence of alcohol.

That's where Abbott's SoToxa comes into play. The handheld device is designed to analyze an individual's oral fluid to rapidly screen and detect the presence of drugs. In a matter of minutes, SoToxa can tell law enforcement officials if a driver has recently ingested THC from marijuana, amphetamines, benzodiazepines, methamphetamines, or opiates.

The device has been around for several years. It was originally developed by Alere and marketed as the DDS 2 Mobile Test System. Abbott picked up the device with its 2017 acquisition of Alere and rebranded it.

Not a marijuana stock, but...

No, Abbott Labs isn't a marijuana stock by any means. The company doesn't provide details on sales for SoToxa. Even if marijuana becomes legal at the federal level in the U.S., the revenue generated by the device would probably only be a rounding error for a company the size of Abbott.

But I think Abbott is a solid stock that conservative investors should like. And it does stand to profit, at least somewhat, should the federal ban on marijuana in the U.S. be lifted. Not many blue-chip stocks can make that claim.