Consumer discretionary giant General Mills (NYSE:GIS) plans to report second-quarter fiscal 2020 earnings before the opening bell signals the start of trading on Wednesday. The packaged foods conglomerate started its fiscal year with improved profitability that compensated for weaker core growth. While the company's stock price performance has remained essentially flat over the last five years, the GIS ticker has appreciated 35% year to date. Below, let's take a brief look at four important items investors should look for in the company's filings. These themes will influence the market's reception of General Mills' financial scorecard.

1. A rebound in organic growth

General Mills is targeting organic growth (reported growth adjusted for acquisitions, dispositions, and foreign currency effects) of 1% to 2% in fiscal 2020. The company reported a decline in organic revenue of 1% in the first quarter; thus, investors should expect that growth will pick up as soon as the current quarter's report in order to meet management's full-year benchmark. If organic revenue expansion dips again this quarter, it's likely that the 2020 target will be revised lower in the earnings release.

Shareholders are likely to zero in on U.S. yogurt and snacks results this quarter, as the two product categories have been special projects over the past few quarters. Management has stabilized yogurt sales, which saw double-digit revenue declines in fiscal 2017 and 2018, followed by a smaller 2% dip last year. After several years of compounded annual revenue growth of 3%, U.S. snacks experienced a 4% revenue decrease in fiscal 2019. Last quarter, yogurt sales were flat year over year, while snacks dropped by just 1 percentage point.

Yogurt sales have improved as the company has adjusted its U.S. product mix to meet several distinct customer preferences, from "clean label" products made from simpler ingredients to protein-enriched yogurt, and even sweetened dessert yogurt in the growing "indulgent" category. In snacks, the company has employed traditional promotions and revenue management techniques to revive sales of core products, including its Nature Valley granola bar label. 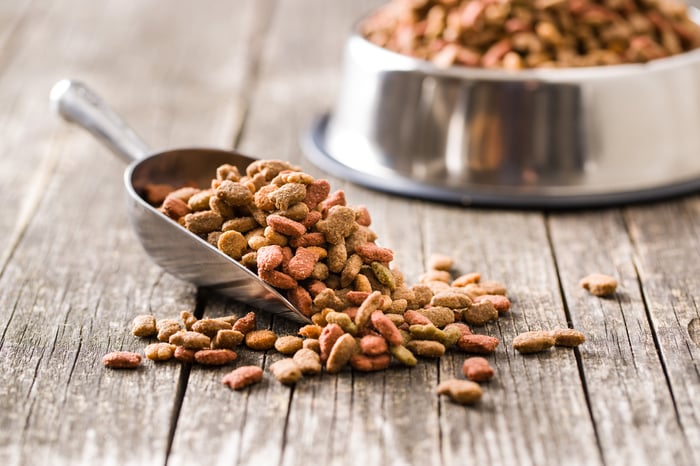 3. Withstanding competition in the pet business

General Mills has so far followed through on its promise to scale Blue Buffalo Pet Foods' revenue after it acquired the specialty pet food business in April 2018. Last quarter, the company's pet food segment improved sales by 7% against the first quarter of fiscal 2019, to $368 million. Were it not for an extra week of sales in the prior-year quarter (due to timing of the Blue Buffalo acquisition), the pet food segment's top line would have increased in the "mid-teens" range.

General Mills plans to expand pet segment e-commerce sales and Blue Buffalo's presence in the FDM (food, drug, and mass-market) channel throughout fiscal 2020. It will also continue to scale the Blue Buffalo brand using its enormous distribution network. Investors are keen to see the segment's mid- to high-single-digit growth rate persist, as competition is intensifying in the premium pet food space.

In late November, rival consumer packaged goods (CPG) conglomerate J.M. Smucker surprised investors with an unexpected deceleration in its pet food business, which management blamed on rising competition in the premium dog food category. Smucker's presence in the pet business followed on the heels of General Mills' entry, as Smucker purchased Ainsworth Nutrition (maker of the Rachael Ray Delish pet food brand) in May 2018. General Mills shareholders will await pet business results to see if it is taking share from competitors -- or vice versa.

The company's remaining three segments -- convenience stores and food service, Europe and Australia, and Asia and Latin America -- together made up 31% of total revenue last quarter. While none of these segments gets quite the attention of the North American retail division or the fast-growing pet segment, collectively, they can significantly influence a given quarter's results.

In the first quarter, for example, all three proved a drag on revenue: The convenience and food service segment reported a year-over-year net sales decline of 4% last quarter, while the Europe and Australia segment and Asia and Latin America businesses booked organic revenue declines of 5% and 4%, respectively.

General Mills encountered sluggish volumes in its food service business last quarter, and in its two geographic segments, management pinpointed retail challenges in France, changes to its distribution network in India, and weaker volumes in China as factors behind softer results.

For General Mills to meet its full-year organic revenue growth goal, performance in these three segments must improve in the aggregate. Shareholders will interpret even flattish combined year-over-year organic growth in these revenue streams as progress when the company issues its report on Wednesday.