Is there a place in the modern video game industry for a physical store chain? It's starting to look as if the answer is "no," which makes GameStop (NYSE:GME) look a lot Blockbuster of 10 years ago. That's when the video rental giant declared bankruptcy, hexed by an industrywide shift toward digital downloads and streaming services. Like Blockbuster of 2009, GameStop appears to be on the verge of a total collapse right now. 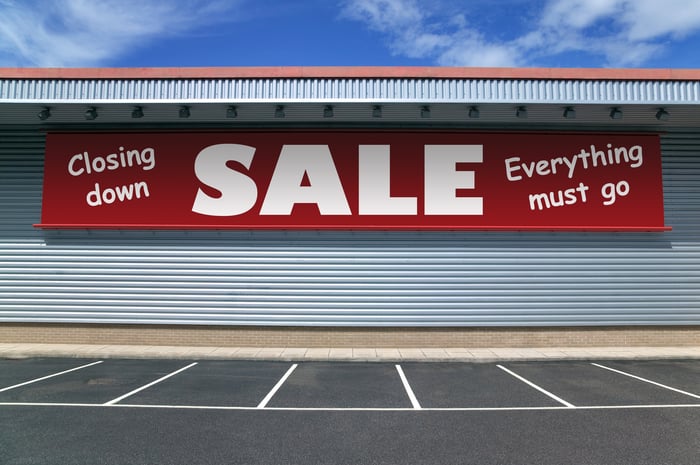 Let me share a snapshot of Blockbuster's last earnings report before the stock was delisted, just four months before the bankruptcy filing.

"Revenue slipped 13.8% during the first quarter, and a year-ago profit turned into a significant loss this time around," fellow Fool Rick Munarriz wrote at the time. "The top line deserves an asterisk. Blockbuster has been closing stores, exaggerating the loss. [Comparable store sales, or comps] actually fell by a more modest -- though still problematic -- 7.1% globally and 7.8% domestically."

How does GameStop's latest earnings report compare to Blockbuster's swan song? Well, revenue fell 25% year over year, and the year-ago period's net profit of $0.67 per share slipped to a net loss of $0.49 per share. Like Blockbuster, GameStop has been closing a ton of stores recently -- the store count stood at 7,100 locations in the third quarter of 2018 and 5,600 stores in the same reporting period of 2019. Comps plunged a disastrous 26% lower in the most recent quarter.

In other words, GameStop is doing a fair bit worse today than Blockbuster was doing in 2010.

The company has been trying to put a glossy veneer on its dire situation. GameStock spent $405 million on debt repayment and another $182 million on stock buybacks over the past four quarters, cutting the debt load in half and reducing the share count by one-third. But the company also burned through $240 million of free cash over the same period.

GameStop's management is looking forward to the introduction of new Xbox and PlayStation consoles for the holiday season of 2020. But if the holiday season of 2019 comes in below already weak expectations, followed by the same drastic downtrends in the first three quarters of the new fiscal year, GameStop might not have enough funds to keep the lights on by the next Black Friday.