Please ensure Javascript is enabled for purposes of website accessibility
Log In Help Join The Motley Fool
Free Article Join Over 1 Million Premium Members And Get More In-Depth Stock Guidance and Research
By Anders Bylund - Dec 18, 2019 at 6:11AM

The streaming video veteran finally shared detailed financial data for its geographical regions. These charts will help you understand that treasure trove.

The new data stretches back to the first quarter of 2017, one year after Netflix's sudden launch of streaming services in 130 new countries.

I sat down with that report plus a handful of older earnings reports, hoping to tease some investable insight out of the cold, hard numbers. The three charts that follow will show you Netflix's international growth in a vivid light, along with raising a couple of new questions. 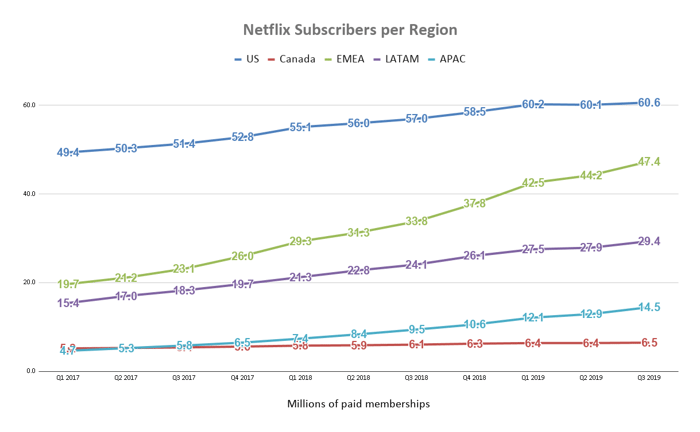 The new report contains data for four distinct regions: U.S./Canada; Europe, the Middle East, and Africa (EMEA); Latin America; and Asia-Pacific (APAC). The data found in existing earnings reports covering the same three-year period simply show information about the domestic market and then everything else. By combining the two data sources, you can break the Canadian and American subscriber and revenue data into two distinct collections.

That's what I did here. In terms of subscriber growth, the two North American neighbors were joined at the hip with very similar long-term growth trends. The domestic subscriber count increased by a total of 23% across these 11 quarters. Meanwhile, the Canadian customer horde grew 25% larger.

Turning to more distant shores, Latin America nearly doubled its subscriber count here with a 91% increase. EMEA is next on our itinerary, displaying a 140% boost. Finally, Asia-Pacific turns out to be Netflix's fastest-growing territory at a pace of 210% across these 11 quarters.

However, APAC started this period from a much smaller user base than EMEA. Europe has always been Netflix's second largest territory, and its lead over the three smaller territories is only growing. That includes boosting EMEA's lead over APAC from 15 million to 33 million subscribers over the sample period. Strong growth from a large starting position beats extreme percentage increases in a much smaller original collection. 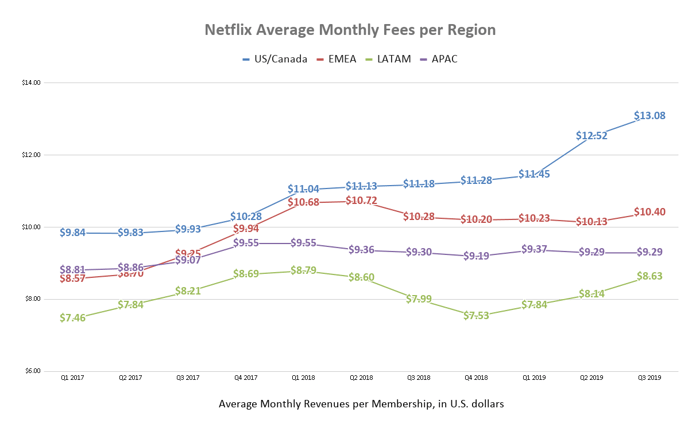 It's easy to see the two domestic price increases in this chart. All told, your average American Netflix customer paid 33% more per month in the third quarter of 2019 than they did in the first quarter of 2017.

The picture is cloudier in other regions. Currency exchange effects play a major part in these figures. Brexit-related changes in the dollar-to-Euro rate explain the dip in average EMEA fees in 2018, for example. Political instability across South America drove the dollar-denominated Latin American fees lower the same year but bounced back thanks to price increases and improving stability in the region in 2019.

Asia is an even more complicated puzzle. Here, price increases have been undermined by tests of new lower price tiers in key markets such as India and Malaysia. The company wants to accelerate its growth in these potentially game-changing markets but pricing of subscription plans is an inexact science. Other efforts toward the same Indian growth goal include a $400 million pledge to produce original content in India by the end of 2020.

Large portions of Latin America, Asia, and Africa share a common problem. Many consumers in these areas don't have access to credit or debit cards, and sometimes no national banking system to speak of. That makes it tough for Netflix to collect subscription fees in a reliable manner. Mobile payment systems may help the company solve this riddle in the long term and cryptocurrencies might even play a part someday, but it will remain a serious challenge to Netflix's subscriber growth and revenue collection for the foreseeable future. 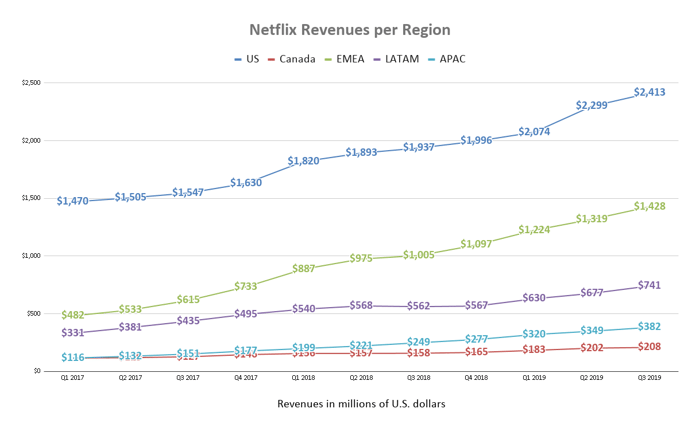 At the end of the day, this is the chart that most investors really want to see. The combination of growing subscriber counts and rising subscription prices adds up to skyrocketing revenue in every region.

Because of the slower membership growth in North America, you'll find the softest revenue growth there as well. American sales increased by 64% across the time period we're looking at, compared with a 79% increase in Canada. Latin American sales surged 124% higher and the remaining two territories tripled in size -- EMEA sales grew by 196% while APAC revenue skyrocketed 229% higher.

Netflix is clearly able to generate dramatically higher sales over time in a variety of economic and cultural environments. Whether it's done by skyrocketing subscriber growth or meaty price increases, the top-line result remains the same. In due time, the rising revenues should translate into generous cash flows as well, erasing one of the most popular criticisms of Netflix's current business model.

The regional data only underscored Netflix is one of the best stocks to buy now. The company is growing by leaps and bounds across a wide variety of business environments, and it's not at all too late to start a position in this global juggernaut.