Starbucks (NASDAQ:SBUX) has mastered the art of the limited-time offer (LTO). The company has a number of drinks for each season that it rotates onto its menu, and customers love them. That tactic works best during the fall, when audiences in the United States go mad for its Pumpkin Spice Latte (PSL) and during the Christmas holiday season, when it brings back a number of customer favorites.

The coffee chain has honed its LTO game in the U.S., but it now uses the tactic around the world. It does not, however, simply use the same tried-and-true drinks that Americans love in every market. Instead, the cafe company leverages its local knowledge for some truly unique beverages. 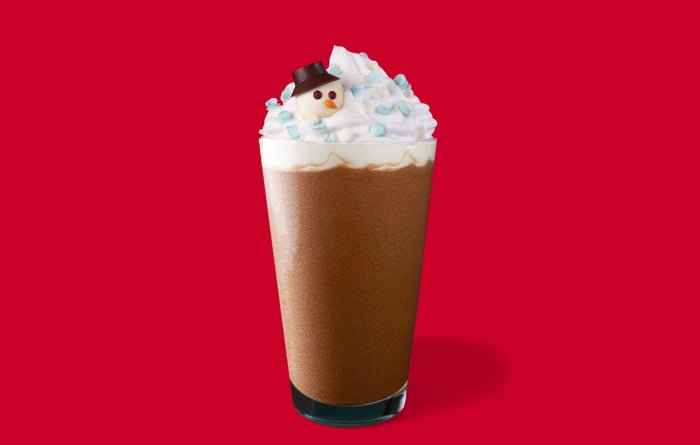 The Snowman Dark Mocha is only being offered in Hong Kong. Image source: Starbucks.

Why LTOs, and what's on the menu?

Starbucks uses LTOs to engage its customers. That might mean getting someone who hasn't visited in a while to stop by a store, or it could mean enticing a regular to spend more money as he or she indulges in a special drink. And, of course, the holy grail business case for an LTO is when it actually brings a completely new person into a store.

LTOs also generate positive media and social media coverage for the company. People enjoy showing photos of the more colorful drinks, and the press seems to delight in writing about them.

These tactics may have been proven in the U.S., but they work around the world. For the 2019 holiday season, Starbucks has a diverse lineup at its stores around the world full of drinks designed to match local preferences. These include (but are not limited to):

A recipe for global success

Some of these drinks would fit in on an American Starbucks menu, while others might be seen as exotic. All of them accomplish the same thing: They drive customers into Starbucks and entice regulars to spend more.

Not every one of these beverages will become a seasonal favorite. Some will be brought back annually, while others may never come back or will become offerings in some years but not others. This system allows Starbucks to keep its menu fresh and have drinks that customers look forward to all year. That's a smart system that works around the world.