Shareholders of Korn Ferry International (NYSE:KFY) must tire of its chronic market underperformance. Over the last 12 months, shares of the executive search and organizational consulting specialist have lost 4% of their value, even as the S&P 500 has gained 25%. Stretch this look back to a 10-year period, and the disparity persists: Korn Ferry's cumulative 158% return trails the S&P 500 index's performance by 40 percentage points.

There isn't a concrete reason behind Korn Ferry's inability to match the broader market's gains. The company regularly throws off decent top-line improvement -- revenue has increased by an average of 17% over each of the last five years. And it's reasonably profitable, although operating margin has bounced between 6% and 12% over the same period (operating margin is near the top of this range at present).

It's not hard to see a more qualitative rationale for the lack of investor enthusiasm, however, as the executive search industry always seems to have a cloud hanging over it. Executive search organizations are sensitive to macroeconomic uncertainty: When the economy slows and managers stop hiring, such companies experience a fairly immediate impact.

The United States is on track to cross through its first recession-free decade in 170 years by year-end, and yet the further removed we are from the Great Recession, the more many observers believe that we're due for an inevitable slowdown. Basically, in both healthy and troubled economic environments, I believe there's a sort of lid of skepticism over Korn Ferry's stock price. 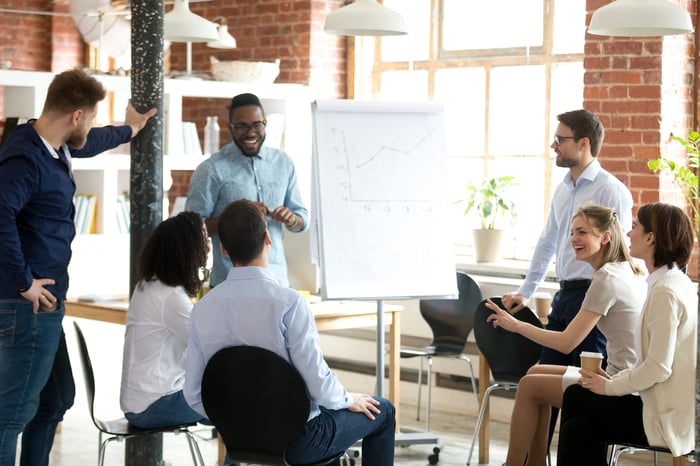 Management must be frustrated, too, as the company has given much thought to developing less cyclical revenue streams than its search and advisory businesses -- or at least ones that aren't so vulnerable to fear on the part of the buyers of Korn Ferry's services. Management has recently noted that clients' "confusion" over the current macroeconomic environment is responsible for their tepid current-year spending. In a scenario in which global GPD is expanding, albeit slowly, Korn Ferry isn't capturing as much business as it would like.

Changing the structure of revenue

The company's answer to the problem outlined above is to reduce the variability and uncertainty that characterizes its annual revenue. In Korn Ferry's fiscal second-quarter 2020 earnings conference call earlier this month, executives relayed to shareholders that the company is reorganizing its reporting units to include a new "digital unit," dubbed KF Digital.

KF Digital will aim to develop recurring, subscription-based revenue by providing learning and training within the company's core competency areas. This segment will exploit the intellectual property (IP) that Korn Ferry has built up over the years through its executive search and advisory businesses. We can view this as a new deployment of intellectual capital.

During the earnings call, CEO Gary Burnison described the initiative this way:

We have to monetize this fabulous IP that we have and that's the whole thinking behind a new business that we're going to be breaking out separately this quarter, the third quarter, called KF Digital. We're going to continue to pursue strategic acquisitions. And finally, we will be the premier career destination in the consulting world.

So the integration of these acquisitions is well under way. We expect the revenues from these acquisitions will add another $120 million to $130 million of revenue. And combined with what was our legacy products business initially creates a $400 million Korn Ferry Digital business. We would expect the adjusted EBITDA margin of the Korn Ferry Digital business after synergies [to be] 27% to 30%.

The company sees wide opportunities to monetize its IP via KF Digital, from harvesting its trove of data on global executive search trends to offering organizational and leadership training and content. To this end, in November Korn Ferry acquired three leadership development companies, which Burnison alludes to above, for an undisclosed amount: Miller Heiman Group, AchieveForum, and Strategy Execution.

Will the new digital project shift the dynamic of Korn Ferry's profit and loss statement? A subscription-based digital business could certainly help provide stability, as the projected annual revenue will equal one-fifth of the company's yearly $2 billion top line. It should also lift profitability since the unit's projected EBITDA margin is approximately double the overall company's 15% EBITDA margin.

This isn't to suggest that Korn Ferry will replicate this level of success; much depends on management's execution in fostering and scaling the new business segment. But at least now shareholders can hope for a different destiny than the subpar returns that have plagued Korn Ferry for the last several years.