2019 isn't quite over yet, but barring a last-minute crash, it's shaping up to be an exceptionally strong year for investors. With the Dow Jones Industrials up more than 20% as of Dec. 18, those who bought into the market's weakness toward the end of 2018 were amply rewarded.

Some stocks did better than others, and the top stocks  in the Dow produced returns that were double or more what the overall average produced. Below, we'll look at Apple (NASDAQ:AAPL), Microsoft (NASDAQ:MSFT), and JPMorgan Chase (NYSE:JPM) to see how they rose to the top in 2019. 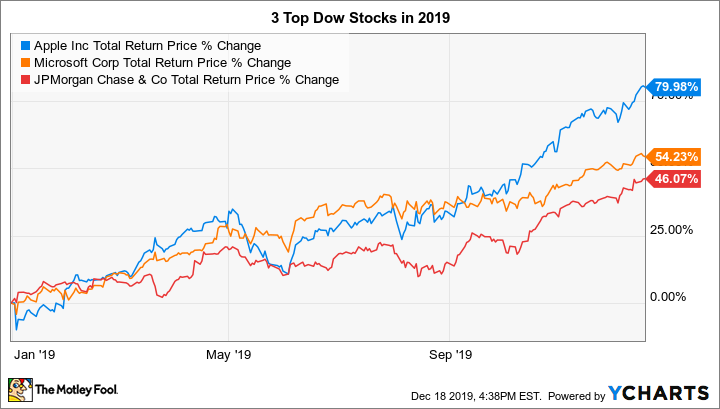 A battle for tech supremacy

One of the biggest surprises for many investors is that Apple and Microsoft topped the Dow in 2019. Most of those following the stocks had assumed that the days of fastest growth for the two tech titans were long gone, especially given some of the challenges that the two companies have faced. Apple has had to deal with criticism that it's simply coasting on the success of its iPhone line of smartphones without doing any serious innovation since its introduction. Meanwhile, Microsoft had already soared coming in to 2019 thanks to its renaissance in embracing new technology, and some were skeptical that the stock had any further to move higher.

Yet 2019's performance showed that both Apple and Microsoft still have plenty of growth prospects. For Apple, the story has been how the company uses the ecosystem that it's established through the iPhone to offer associated services and features that its customers will embrace, as those services can provide recurring streams of revenue for Apple. Moreover, the importance of wearables like the Apple Watch and AirPod lines has risen sharply, surprising many but also helping to lift overall sales. 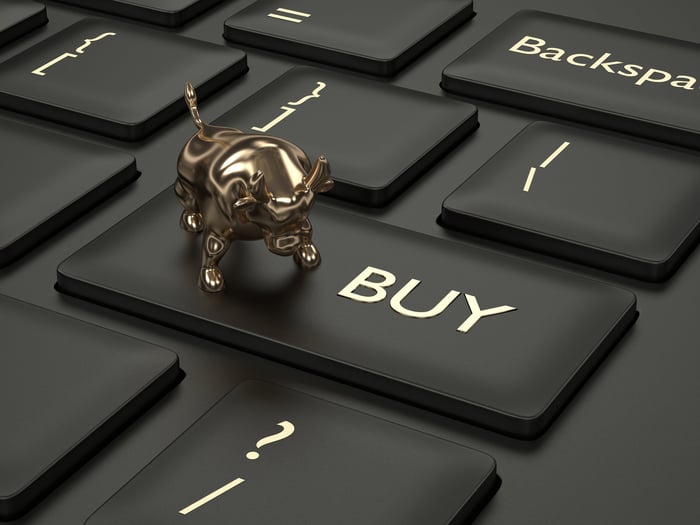 Microsoft is arguably doing even better. Cloud computing has helped the software giant reinvent itself, giving it a new platform to offer its Office productivity software through a recurring subscription model that stands to produce even more revenue than its previous license-based model. At the same time, Microsoft's Azure cloud platform is a key competitor in a fast-growing market. When you consider all the progress that Microsoft has made since being left for dead in the mid-2000s, it's no wonder that investors continue to be excited about its prospects for 2020 and beyond.

The race for the final spot in the top three was somewhat tighter, but at least for now, JPMorgan Chase looks poised to win out. The banking giant has gone through a tumultuous year, as the Federal Reserve started the year looking to raise interest rates further, only to do an about-face and start cutting again. At first, that led some investors to become less excited about JPMorgan, because lower rates produced flattening yield curves that ate into net interest income for the banking sector.

Yet JPMorgan has been able to retain its leadership role in banking. New technology is attracting more mobile banking customers, and the bank has also boosted its loans and deposits. JPMorgan's trading business didn't keep up with the rest of the financial institution's divisions early in 2019, but the bank is hopeful that it can get itself back on track after a strong third-quarter showing. With a generous dividend and solid share price appreciation, JPMorgan gave investors the best of both worlds in 2019.

It's always hard for stocks to repeat as top performers two years in a row, and after such a strong 2019, investors shouldn't expect JPMorgan, Microsoft, or Apple to deliver anything close to what they gave shareholders this year. However, all three businesses are strong fundamentally, and that could make them good long-term investments for those who have the patience to stick with them through thick and thin.