Please ensure Javascript is enabled for purposes of website accessibility
Log In Help Join The Motley Fool
Free Article Join Over 1 Million Premium Members And Get More In-Depth Stock Guidance and Research
By Harsh Chauhan - Dec 19, 2019 at 8:45AM

Walmart has been lagging behind Amazon in India's online grocery space, but its latest move could trigger a turnaround.

The online grocery market in India is booming right now. Management consulting firm RedSeer estimates that Indians will spend $8.7 billion to purchase groceries online in 2022, compared to $1.2 billion last year. Given the enormous growth on offer, it is not surprising to see why the online grocery market is turning out to be the new battlefield for Amazon (AMZN -2.78%) and Walmart (WMT 0.32%) in India.

Amazon recently started scaling up its online grocery business in India with the help of hypermarket chain Big Bazaar. The e-commerce giant is currently using 18 Big Bazaar locations in the three major cities of Mumbai, New Delhi, and Bengaluru to service a total of 300 to 1,000 orders daily. The orders are fulfilled through Amazon's two-hour delivery service. 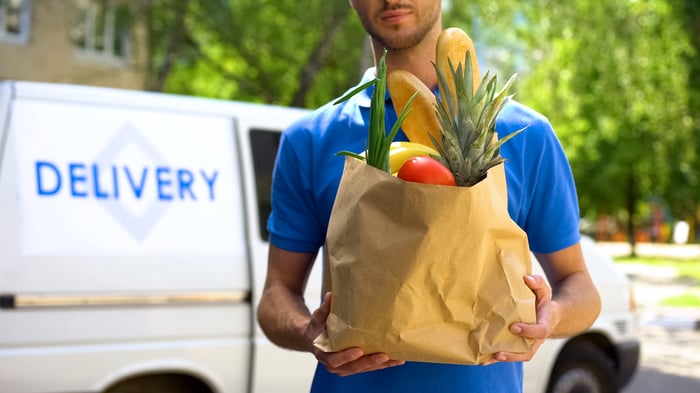 What's more, Amazon is capable of quickly scaling up this business, as it has a stake in another major supermarket chain in India. More -- India's fourth-largest supermarket chain -- has over 540 locations in the country that sell groceries, fresh vegetables, and fruit, among other items. So Amazon is capable of quickly establishing its hold over the online grocery space in India because it has access to a wide network of physical stores.

Walmart has been lacking in this regard so far. The company recently opened its 28th cash-and-carry store in India, indicating that its physical presence is not as great as its rival's. In fact, Walmart-owned Indian e-commerce player Flipkart sells groceries online in only five Indian cities now. But Walmart's latest move will make it difficult for Amazon to establish its dominance in this market.

...but Walmart won't be left behind

Walmart's lack of a broad physical infrastructure in India would have severely handicapped Flipkart's ability to set up an efficient network to ensure quick deliveries of fresh groceries. The big-box retailer has now taken care of that problem by investing in Ninjacart.

Ninjacart is a business-to-business (B2B) supply chain firm that uses data, analytics, mobile apps, and the Internet of Things (IoT) to deliver fresh produce from farmers to mom-and-pop stores and restaurants. The firm deploys a just-in-time supply chain system with the help of 44,000 farmers that serve over 60,000 customers.

Walmart also reports that Ninjacart connects retailers and farmers through a wide network of 1,200 warehouses across India. The firm currently moves more than 1,400 tons of fresh produce daily, and the important thing to note is that this volume has doubled in the past four months.

This strategic investment should help Walmart complement its existing network of cash-and-carry stores in the country and bring online grocery deliveries to more locations.

The company has already charted out a strategy of using local mom-and-pop stores to quickly fulfill orders placed on Flipkart. With Ninjacart, it now has a mechanism in place to quickly get fresh produce to mom-and-pop stores. This should give Walmart's online grocery business in India a nice shot in the arm and help it mount a serious challenge against Amazon in this potentially lucrative market.

So it is important for both Amazon and Walmart to quickly scale up their online grocery delivery systems before the market gains critical mass. As things stand right now, Walmart seems to be the one playing catch-up given Amazon's access to physical stores through its acquisitions. But things could change quickly, as Walmart seems to be getting its act together and challenging Amazon in this multibillion-dollar market.