Shares of Apogee Enterprises (NASDAQ:APOG) fell more than 20% on Thursday morning after the architectural products and services provider reported weaker-than-expected third-quarter results and lowered full-year guidance. The company blamed lower volumes and some operating difficulties for the miss, but said it remains confident in its long-term outlook.

Apogee, which provides glass and aluminum framing systems and installation for commercial buildings, reported third-quarter earnings of $0.57 per share on revenue of $337.9 million, well below analyst expectations for $0.76 per share in earnings on sales of $360 million. Revenue was down in three of the company's four divisions, with customer delays on major projects and competitive issues related to the strong U.S. dollar blamed. 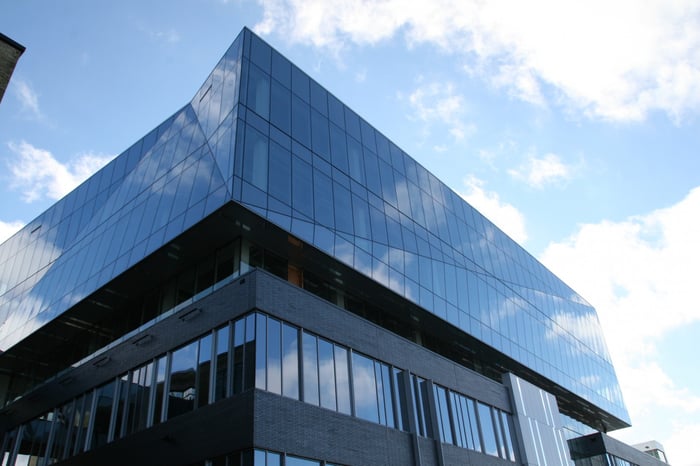 The company also lowered its full-year earnings guidance to $2.15 to $2.30 per share, down from $3 to $3.20 per share and well below the $3.04-per-share analyst consensus estimate. CEO Joseph F. Puishys in a statement said that while the numbers were coming down for the remainder of the year, he is still optimistic.

"[W]e remain confident that the company is well positioned for growth and margin expansion next year and beyond," Puishys said. "In addition to actions to drive Apogee's long-term success, we recognize the imperative for improved near-term performance."

The company provided an update on its previously disclosed plan to reduce costs, saying it expects to generate annual savings of between $30 million and $40 million when the actions are fully implemented.

Shares of Apogee did well in the first half of the decade, climbing more than 300%, but over the past three years the company's stock is now off 37%. Some of that was due to fears that a potential recession could eat into demand for construction products. The recession so far has not materialized, but Apogee's commentary on the quarter indicates that some large projects are not coming together as quickly as anticipated.

Apogee's long-term future looks bright, as the company's products are important in helping architects and building managers bring down energy consumption costs. But investors on Thursday were in no mood to hang around and see how long until that potential translates into higher profits.