Services may be the driver of Apple's (NASDAQ:AAPL) growth in the future, but for now, it's still all about the iPhone.

At the start of 2019, shares sank when Apple reported a rare earnings warning, blaming lackluster demand for its iPhone in China. A more recent sell-off in the stock was prompted by U.S.-China trade war fears and the impact it would have on iPhone sales.

As a result of that and as competition intensifies, change may be afoot at the Cupertino, California, tech giant. This change could add stability to both Apple's stock and its iPhone business. Citing supply chain checks, JPMorgan Chase recently predicted Apple could release new iPhone models twice a year. This would mark a huge strategy shift for a company that has stuck to the same script for nearly a decade.

The Wall Street firm argued that releasing updated iPhone models twice annually gives Apple more wiggle room to change its products when new features are launched by rivals. It also spreads out the seasonality of its business so it's not reliant mainly on the holiday shopping season. 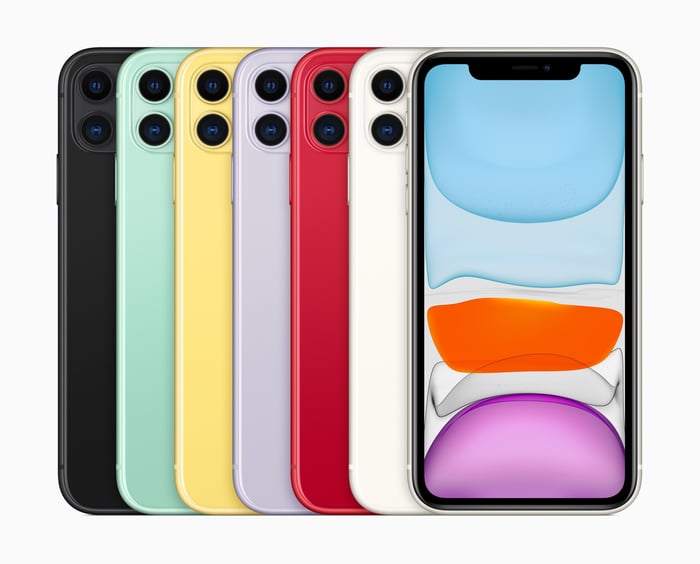 New iPhones more than once a year

As it stands, Apple launches new iPhones in the fall to coincide with the holiday shopping season. Investors put a lot of stock in its fourth-quarter earnings report, which can result in steep movement in shares up and down.

JPMorgan predicted Apple will launch two new iPhones in the first half of 2021 and then another two in the second half of 2021. The Wall Street firm still thinks it will have one release date in 2020 and then change its schedule come 2021. JPMorgan isn't alone in predicting Apple will alter how it releases iPhones. Rumors have been swirling for weeks that Apple will roll out the SE2 in the first quarter of 2020. The phone is expected to be similar to the iPhone 8, but run on Apple's new A13 processor and come at a low price point.

If Apple were to change to a twice-a-year release schedule, it would also be better able to match the launch dates of some of its rivals, including China's Huawei, which has been stealing share from Apple in its home country. Samsung also releases its Galaxy smartphones on a staggered schedule. Additionally, it enables Apple to move quickly to push back against rivals if they incorporate something Apple doesn't have in its newest devices. By only releasing new iPhones annually, it's forced to wait to add more features. This can also result in more models at different price points, potentially boosting sales and expanding the addressable market.

For Apple investors, it means yet another opportunity to see the stock jump if its iPhones resonate with customers more often. After all, the recovery in Apple's stock since the beginning of the year has everything to do with improvements in iPhone sales. Further upside in the New Year is also contingent on iPhone momentum. It's why Cleveland Research is predicting Apple's stock could gain 15% by the end of its fiscal year 2021. The firm cited strong momentum for the new iPhones that continued into the holiday season for the bullishness.

Will wearables get the same treatment

A new launch schedule could also help another fast-growing area of Apple's business: its wearables, namely its Apple Watch and its AirPod wireless headphones. Apple tends to announce new watches and devices when it rolls out iPhones. It could apply the new schedule to its Apple Watch and AirPods. That could drive sales throughout the year rather than just during the holidays.

Wearables are experiencing red-hot growth. According to market research firm IDC, 84.5 million wearable devices were shipped on a global basis in the third quarter alone. That's up 94.6%, setting a record in terms of shipments in a single quarter. For 2019, IDC expects shipments to hit 305.2 million, up 71.4% compared to 2018.

Apple ended the third quarter with a 35% market share, with China's Xiaomi a distant second with a 14.6% market share. Samsung was in third place, owning 9.8% of the market.

There's no guarantee Apple will start releasing iPhones or wearables more frequently, but any positive momentum it sees in its iPhone business means more upside for the stock now and into the New Year.