The old admonition to be careful what you wish for because you might just get it applies to facial recognition. Useful in opening your iPhone and in helping law enforcement bring criminals to heel, the technology's proliferation also portends a dystopian future in which people live in a surveillance state and our every move is analyzed by algorithms, artificial intelligence, and machine learning.

Privacy advocates warn of the potential for abuse and misuse, meaning it's up to the technology giants leading us into this brave new world to reassure us their achievements won't be used against us. So far, Amazon.com (NASDAQ:AMZN), Apple (NASDAQ:AAPL), Facebook (NASDAQ:FB), and others have done little to assuage our fears. 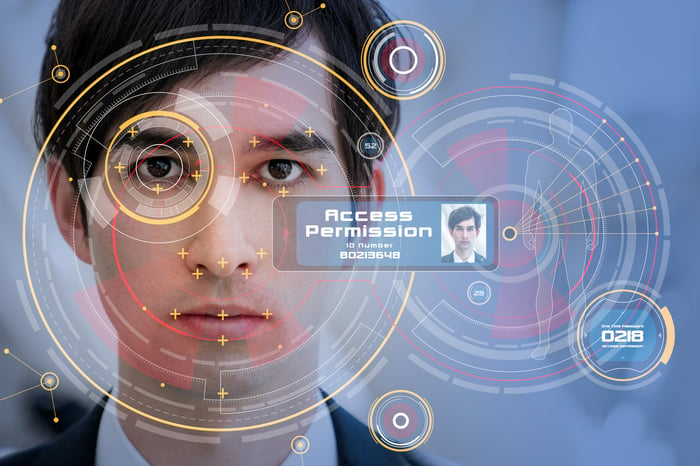 Of course, don't just blame the tech giants. Consumers have proved all too willing to give up freedom for security, the bane of a republic that Benjamin Franklin warned would make us deserving of neither.

A survey by privacy watchdog ProPrivacy found 55% of all Americans believe facial recognition technology is largely a force of good that has an important role to play in public safety, with another 54% expressing a willingness to exchange certain freedoms if the technology could offer benefits.

Most people weren't aware that when they signed up for Facebook and began sharing photos of themselves and their families and friends online, the social media giant was scanning all the facial images and digitizing them to store in its database.

It was sued under an Illinois law that made it illegal to collect and store biometric data without a user's consent. This past summer, it lost an appeal in federal court that said it violated the law, though it plans to appeal again. The class action lawsuit is seeking $35 billion in damages. Facebook previously agreed to pay a $5 billion fine to the Federal Trade Commission for data privacy violations.

Alphabet's Google and Snap were both sued under the Illinois law. Google was able to win dismissal of its case; Snap's is ongoing.

Yet consumers are often swayed if not enamored by their first, seemingly innocuous introduction to the technology. The Snapchat filters subject to the lawsuit use a form of facial recognition, while Apple's iPhone X facial recognition capabilities let us unlock our devices just by looking at them.

The technology that replaced Apple's previous fingerprint scans helped the smartphone quickly become one of Apple's top-selling iPhones, even though it carried a $1,000 price tag.

And the technology is spreading out well beyond just tech company innovations into more mundane situations. Last year, fast-casual burger chain BurgerFi introduced new self-serve kiosks at which customers are given the option of paying for their order using facial scans that will be stored on site for three years.

It's not really a new technology, though most people likely don't realize how widespread its adoption is becoming or where it is being used. Consumers accept these erosions of privacy because they're not viewed as threats. They believe they're just unlocking their phone or paying for their burger or that retailers like Walmart and Target, which tested and abandoned facial recognition systems to identify shoplifters, are using it for valid purposes. The ProPrivacy study found, in the wake of various school shootings, that 54% of Americans are also comfortable with facial recognition being used in schools.

It's only when the images become used for other purposes that they realize the implications.

Because a face is something the world can see, the police don't need your permission to use facial recognition to unlock your phone. Courts have ruled people can't be forced to give up their passcodes to open a phone, but fingerprints and facial recognition are not similarly protected.

It's why Amazon.com's Rekognition product has privacy experts and its own employees concerned. The e-commerce giant is putting the full computing capabilities of its Amazon Web Services division to work, analyzing photographs and video footage at blazing speeds to identify faces for the police.

Amazon was forced to allow shareholders at its annual meeting this year to vote on whether it should stop selling the technology to governments and law enforcement agencies. Amazon had tried to block the shareholder proposals from appearing on the ballot but was overruled by the SEC. It need not have worried; shareholders overwhelmingly voted against the proposals.

Yet some voices in the tech world are urging caution. Microsoft (NASDAQ:MSFT) has become an outspoken advocate for limiting facial recognition's spread and for regulating it closely, even though it has developed capabilities of its own.

It wrote last year, "Facial recognition technology raises issues that go to the heart of fundamental human rights protections like privacy and freedom of expression." It believes tech companies can't self-police them in this field and that government needs to step in and take control.

ProPrivacy editor Sean McGrath agrees, saying, "As of right now, the technology is completely unregulated, often inaccurate, and has the potential to erode our rights and civil liberties protected by law."

While Edward Snowden's revelations about government spying on U.S. citizens make an effective argument that the government can't be trusted with that power either, some businesses are voluntarily stepping away on their own. Stun gun and body camera maker Axon Enterprise (NASDAQ:AXON) was looking to integrate facial recognition into its products, but an ethics panel it formed said the technology was not reliable enough to not be abused. Axon chose to end its program until safeguards could be developed.

The price of eternal vigilance

Facial recognition can be beneficial in a large array of cases in both private enterprise and law enforcement. It also has the potential to be vastly lucrative for those developing it. But it is up to tech companies to take a principled position, like Microsoft and Axon Enterprise have done, to reassure the public they will only allow the technology to proliferate if it can be safely deployed without undermining our freedom in the process.