Tens of millions of people around the globe will flock to movie theaters in the coming weeks to see Star Wars: The Rise of Skywalker -- the conclusion to George Lucas' original masterpiece trilogy that debuted over 40 years ago. For movie theaters, the film is sure to be a blockbuster hit and caps off a busy 2019 -- thanks to other Disney hits like Avengers: Endgame, The Lion King, and Toy Story 4. So what's up with the world's largest theater chain: AMC Entertainment (NYSE:AMC)?

Shares have plummeted 37% this year, and that's after tanking 19% in 2018 and 55% in 2017. As a result, the dividend-paying stock yields a juicy 10.4% as of this writing. Yikes! Such a high yield usually indicates general pessimism surrounding a company, perhaps even suggesting a dividend cut is in order.

In spite of a busy couple of years for the box office and another massive hit potentially on the way, AMC has taken on substantial debt to gain its market-leading position, and 2019 has been a year of heavy investment. A rebound could be in order, though, and AMC's lofty dividend isn't quite as risky as it might look. 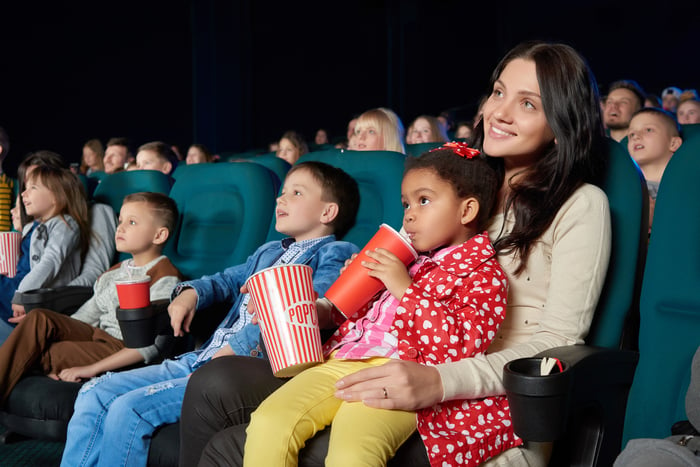 As good a year as it's been for the silver screen (Avengers: Endgame now holds the all-time record for global box office receipts), industrywide ticket and gross sales are still expected to end the year down about 3% from record 2018 numbers. Taken in this context, AMC is doing better than average, driving revenue with its "unlimited" movie-attendance offering via Stubs A-List, better seating and screen options, new food and drink menu options, and advertising (lumped into the "other theater" segment).

With no top-line growth, higher rent payments and wage inflation are the primary causes of the higher operating expenses and widening net loss at AMC. Running in the red for an extended period of time can wreak havoc on a dividend stock like this. However, things aren't quite as bad when looking at free cash flow: the money left over when only including cash expenses and capital expenditures.

Still, at the end of the day, AMC's heavy spending means losses. The good news is that AMC's current dividend only costs $20.8 million a quarter. That's a relatively small figure.

AMC's management reiterated previous guidance regarding operating expenses during the Q3 earnings call. AMC expects to be able to lower operating costs by at least $50 million next year, thanks in large part to the company's investment in technology. Some of the savings will come from lower corporate headcount and the ability to optimize its screen times because of its digital booking app. For example, the average theater in the U.S. was closing 4% earlier in Q3, allowing AMC to lower its utility bills and send idle staff home earlier.

Additionally, the bulk of AMC's seating and screen upgrades and other strategic investments have been completed, which means overall capex should fall. Capex totaled $550 million over the last four quarters, but with Q4 2018 dropping out of the trailing 12-month equation and expected Q4 2019 spending added to the mix, management said to expect total 2019 capital expenditures of at most $415 million. In 2020, that number will drop again to just $300 million.

There's also the expected addition of AMC-licensed theaters in Saudi Arabia. The company currently has one in operation in the capital of Riyadh, which is doing 11 times the average revenue of its theaters in the U.S. or Europe. A second theater is opening in December, and a total of 12 to 20 are expected by the end of 2020 and 40 to 50 over the next five years. Because the Saudi Arabian theaters are a joint venture, this could be a nice boost to the bottom line over time for AMC.

Put simply, AMC's movie-screening business is set to become profitable again next year. Margins will remain tight -- free cash flow of about $100 million would only translate to a 1.8% margin, based on the company's $5.44 billion of annual revenue -- but it would be enough to cover the roughly $20 million in dividends paid each quarter.

A cut in shareholder pay might still be in order. That is likely one reason the current yield has been pushed so high. However, with business possibly getting ready to turn a corner, the dividend and a potential rebound in AMC's share price have me interested in making a purchase in the near future.