CalAmp (NASDAQ:CAMP) released modestly better-than-expected fiscal third-quarter 2020 results on Thursday after the markets closed, showcasing a return to top-line growth on the back of its burgeoning software and subscription services segment.

But the machine-to-machine communication company followed with disappointing forward guidance, leading shares to plummet 18.5% on Friday in response.

Now that the dust has settled, let's take a closer look at what CalAmp accomplished over the past few months, starting with its headline numbers: 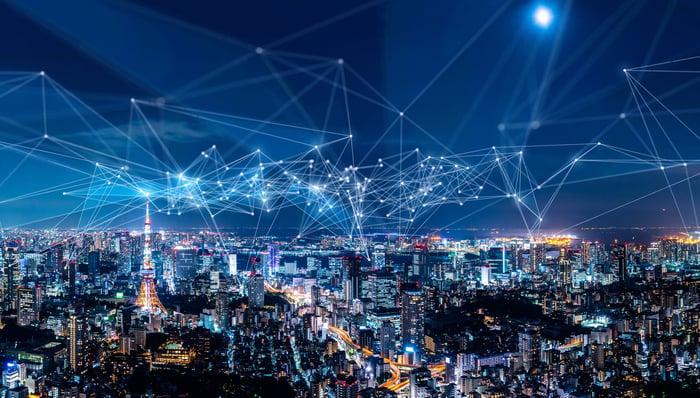 First, we need to keep in mind the GAAP results above include the impact of items like stock-based compensation and a $2.4 million pre-tax charge related to early retirement of debt and purchase accounting adjustments related to acquisitions. Adjusted for those items, CalAmp generated (non-GAAP) net income of $5 million, or $0.15 per share, down from from $8.9 million, or $0.25 per share in the same year-ago period. Meanwhile, adjusted EBITDA declined 4.5% year over year to $10.9 million.

By those measures, CalAmp's results were well within the guidance ranges management provided in September for adjusted EBITDA of $9.5 million to $13.5 million, adjusted earnings per share of $0.11 to $0.17, and revenue of $92 million to $98 million.

Breaking down the top line further, Calamp's growth was driven entirely by a 67.5% increase in software and subscription services revenue, to $33.4 million, and partially offset by a 7.8% decline in revenue from the company's larger telematics systems segment to $63.2 million.

Software & Subscription Services revenue also set a new record, representing 35% of total revenue as we continue to track toward our longer-term target of 40%. Underpinning this growth in our SaaS business was strong performance from our recent acquisitions, and in particular, Synovia Solutions. Additionally, despite recent tariff headwinds, we saw increasing orders from certain key enterprise customers, including strong sequential growth at our largest OEM customer. CalAmp's transformation to a global SaaS [software-as-a-system] solutions provider continues to advance as evidenced by our performance this quarter and year-to-date.

For perspective, CalAmp only recently acquired Synovia this past April, building on its earlier acquisitions of LoJack Mexico (now Car Track) and TRACKER in February as part of an effort to accelerate its transition to more recurring software and subscription revenue streams.

To that end, during the subsequent conference call, Burdiek noted CalAmp's worldwide subscriber based increased roughly 35,000 subscribers sequentially from last quarter, to approximately 1.3 million, led by a combination of those acquired businesses. He also confirmed that largest OEM customer remains heavy equipment juggernaut Caterpillar (NYSE:CAT), which ramped up orders for CalAmp's next-gen LTE-based product family during the quarter as it works to transition away from older 3G technology.

For the fiscal fourth-quarter 2020, however, CalAmp expects revenue of $95 million to $100 million -- up roughly 15.5% year over year at the midpoint -- with adjusted earnings per share of $0.10 to $0.16. By contrast, Wall Street's consensus prediction called for much higher earnings of $0.24 per share on revenue near the midpoint of CalAmp's guidance range.

Make no mistake: It's encouraging to see CalAmp continue to accelerate its growth by sustaining momentum in its SaaS business and enjoying the fruits of larger customers' shifts to its newest LTE tech. But it's also obvious the market is concerned over the near-term impact of that shift on CalAmp's margin profile.

As CalAmp capitalizes on the fruits of its acquisitions, however, and assuming it can continue to build on these successes in the coming year, I suspect we'll see those margins improve in the next year or so. And that could mean Friday's pullback proves to be an excellent buying opportunity for patient, long-term investors.