Investors were cautious heading into Darden Restaurants' (NYSE:DRI) third-quarter report last week after the restaurant chain gave them reasons for concern in its prior earnings announcement. The Olive Garden and Longhorn Steakhouse brands had both reported sluggish sales growth at the start of fiscal 2020, thanks mainly to weak diner traffic.

That sales picture brightened a bit over the last few months, even as demand stayed weak at Darden's tentpole Olive Garden brand.

Let's take a closer look at the latest earnings report. 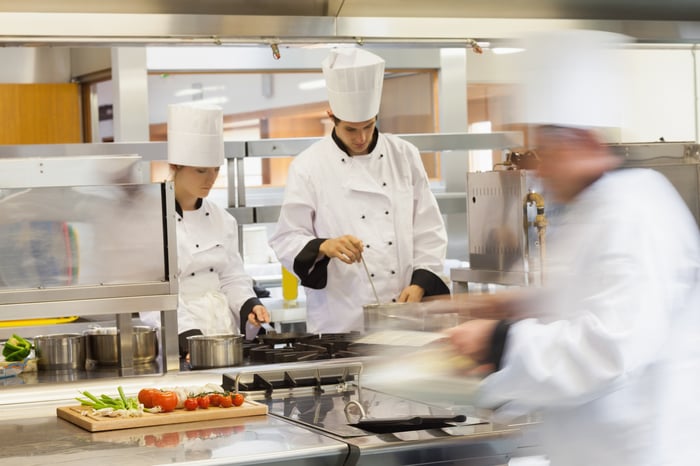 Darden's sales growth improved quarter to quarter, with comparable-store sales gains landing at 2% compared to 1% in fiscal Q1. The growth wasn't broad-based, though. Olive Garden held steady at roughly 2%, and most of the chain's smaller concepts remained consistent as well. The biggest change was at Longhorn Steakhouse, where comps jumped to a 6.7% increase from 2.6% a few months ago.

Darden's finances continued to improve thanks to a mix of higher pricing, popular menu offerings, and cost cuts. These wins more than offset those rising food and labor costs to allow operating income to rise to $160 million, or 7.8% of sales, compared to $148 million, or 7.5% of sales, a year ago.

The chain took advantage of its recently announced stock buyback plan, with repurchase spending rising to $136 million compared to $95 million in the fiscal first quarter. That stepped-up investment pace isn't hurting its cash position, given that Darden has generated over $400 million of operating cash flow so far this year. At the same time, it is helping lift per-share earnings thanks to the declining share count.

The operating and financial trends all conform to the outlook management articulated back in September calling for a slight annual slowdown in comps that's offset by faster store growth and increased profitability. Darden affirmed each of its 2020 predictions, in fact, including the opening of 44 new locations and the achievement of positive comps that land between 1% and 2% compared to last year's 2.5% boost.

That comps figure represents modest market-share growth, but it still stands in contrast to the bigger gains being notched by restaurant stocks in the fast-casual and fast-food segments. Back in September, Lee called this divergence between the restaurant niches "surprising" but suggested that full-service dining should be supported by the generally strong economic conditions in the country. The fact that Darden's growth outlook didn't change implies that management sees this industry gap continuing at least over the next few quarters.