Hennes & Mauritz (OTC:HNNMY), also known as H&M Group, is proof that a brick-and-mortar business can reinvent itself and survive in these grim days of more people shifting their shopping online. H&M estimated recently that sales in the quarter that ended in late November increased 9% year over year, and that's before the company had a chance to tally Black Friday sales.

Analysts are estimating that the company's earnings for the year will be an increase over the previous year, which would be the first such increase in four years. The company reports full results on Jan. 30.

The company, which sells inexpensive, stylish clothing for adults, teens, and kids under brands including H&M, Weekday, and COS, attributes the turnaround seen so far to spending on its online platform as well as the optimization of its physical stores. 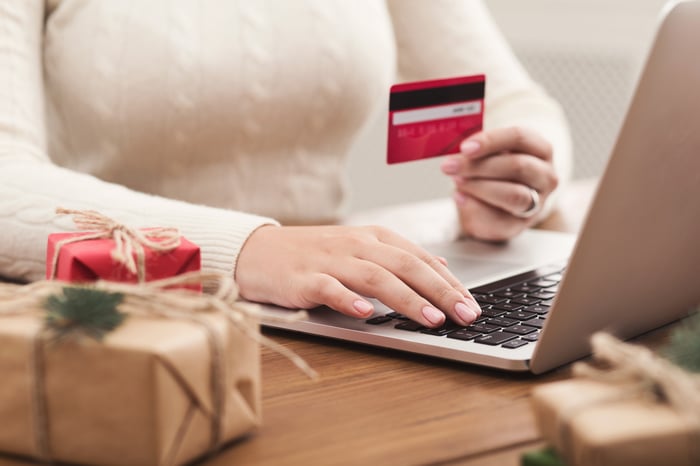 With efforts to ramp up its online offering, H&M aims to make a name for itself in the growing e-commerce market. Global retail e-commerce sales are expected to rise nearly 18% this year from last year's figure, while total retail sales are forecast to grow 3.4%, an Internet Retailer report showed. The trend isn't new, and retailers who have relied on physical stores -- including H&M -- have seen profit decline as shoppers shift spending online.  H&M decided on a transformation that might have been financially painful, resulting in a 9% increase in expenses last year, but it is beginning to pay off.

As part of its new look, H&M has worked to integrate the in-store experience with the online experience, offering options like the option to return items purchased online in a store or to pick up an item purchased online in a store. The company's "Scan and Buy" app allows customers in a store to scan a product's QR code and find other sizes and colors online, and "Find in Store" lets customers use their phones to find an item they've seen online in a physical store. In Sweden, H&M is testing the "Perfect Fit" app, which involves a customer creating a digital avatar based on selfies from his or her phone. The customer then uses that avatar to try on clothing, helping ensure the right fit when shopping online.

By the end of 2018, H&M was online in 47 markets, and the expansion continued, with Indonesia and Thailand among the most recent additions this year. H&M is in more than 70 markets now. Online sales have been growing, with a 27% increase in the second quarter followed by a 30% increase in the third quarter. Last year, online sales accounted for 14.5% of the company's total sales.

As for stores, H&M is aiming to consolidate in established markets and open new locations in areas of growth. Most openings were set for areas outside of the U.S. and Europe, the company said in its 2018 annual report. The company's net store additions for the year will be about 120, H&M said this fall. The company's store count totaled 4,968 at the end of 2018.

H&M is not only reaping rewards when it comes to sales figures; it's also reaping rewards on the stock market. The U.S.-traded shares, which have lost more than half of their value from a peak in late 2013, are up 40% this year.

As many specialty apparel retailers and department stores struggle, close stores to cut costs, and try to figure out how to reinvent themselves, H&M is already on its way to figuring things out. The stock trades at about 23 times earnings, which might be worth it given the efforts the company has made both online and in its physical stores. Investors will want to see if H&M does indeed report a profit increase for the year, a sign that the company's transformation is bearing fruit. Further details about online sales and information on the opening or closing of physical shops are other points that investors will want to watch.