American investors know that the retail sector is challenged. The rise of e-commerce and Amazon.com has caught department stores and mass merchandisers flat-footed as they struggle to find the right balance between physical stores and online retail.

Macy's, a retail titan for generations, has seen comparable sales slide for six quarters in a row and recently announced it would close 15% of its store base. Many of its peers, facing similar headwinds, followed suit.

But beyond the disruption of e-commerce, there is another force troubling apparel retailers. Mainstays like Macy's, Gap Inc., Express, and others have faded and a slew of teen retailers like American Apparel and Aeropostale have filed for bankruptcy. But in their place, so-called fast-fashion retailers have risen to dominate the apparel retail landscape by runway trends and quickly turning out affordable lines of clothing devoid of the logos associated with brands like the Gap and teen retailers like Abercrombie & Fitch. 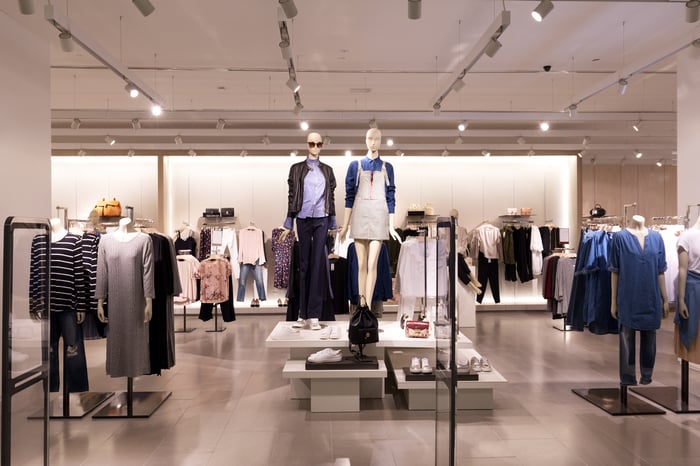 Fast-fashion leaders include Forever 21, Uniqlo, and Zara, but perhaps none is better known than Hennes & Mauritz (OTC:HNNMY), or H&M. The Swedish chain now has more than 4,000 stores around the world.  While many clothing retailers are shrinking their footprint. H&M continues to expand at a blistering pace, with plans to open 425 new locations this year as it has more than doubled its store count. The Swedish giant now has more stores than The Gap, whose brand family includes Banana Republic and Old Navy. By store count, only Zara parent Inditex is bigger, though H&M is slightly ahead in revenue.

Although the company is mostly ignored in the American financial media, U.S. investors will be pleased to learn H&M is publicly traded over the counter as HNNMY as it's traded on the Stockholm stock exchange.

The stock has been a winner over the long term, but recently it seems to be confronting many of the trends that have hit other apparel retailers as the stock is down about 30% from its all-time high just over a year ago. The company's revenue growth slowed to just 1% in September, its slowest pace in over a year,  and it said a weak start to the fall season could force further markdowns. The company also announced plans to introduce two new brands next year as it owns several other brands, including Cheap Monday and Monki, though the vast majority of its stores are its namesake banner.

H&M seems to be the victim of a typical trend in competitive markets. After carving out a leadership position in fast fashion, its dominance has been steadily eroded as brands like Primark have beaten it on price, mainstream retailers have jumped on the fast-fashion bandwagon, and Zara and Asos may be eclipsing it on style.

For the quarter just reported, currency-neutral revenue rose 8%, but profits fell nearly 10% due to currency headwinds, a decline of 190 basis points in gross margin due to increased markdowns and dollar-related purchasing costs.  Increased investment on IT to build out new e-commerce sites as well as the development of new brands was also a drag on profits as SG&A expenses increased 9% on a currency-neutral basis.

Growth in the U.S., the company's second-biggest market by store count, remained strong as sales increased 6%, making it the best-performing major market. In Germany, meanwhile, its largest market, sales fell 1%. Newer markets were also a key source of growth as sales jumped 18%.

That difference seems to indicate that H&M may be reaching a saturation point in its core markets, including Europe and the U.S. The company will accelerate its expansion in the current quarter with 214 store openings and plans to enter new markets like Colombia, Iceland, and Kazakhstan. But as it reaches maturity in North America, the company's headiest days of growth may be behind it. At a P/E of 21, the stock is modestly priced and delivers a strong profit margin. However, fashion is fickle and the company is struggling to hold whatever competitive advantage it has. As it invests in new markets and brands, H&M may find the frontier is not as ripe as it once was.