Shares of Zillow Group (NASDAQ:ZG) (NASDAQ:Z) plunged more than 30% in August, after the online real estate leader's full-year guidance left investors wanting more. In September I went out on a limb to argue that the stock was worth buying then -- particularly considering the massively disruptive potential of Zillow's budding "homes" segment, as the Zillow Offers program continues to expand.

As it happened, Zillow stock went on to rally more than 45% since then, including a 21% gain in November alone driven by the company's exceptional third-quarter 2019 results.

But that now raises the question: Is Zillow Group stock still worth buying today? I think so, and here's why.

First, just as the company promised, the Zillow Offers program continued its rapid expansion by adding eight new markets last quarter alone, bringing its total to 21 markets in 11 states. All told, Zillow purchased 2,291 homes last quarter (up from 1,535 in Q2) and sold 1,211, and ended the period with 2,822 homes on its balance sheet. More than 80,000 people requested an offer from Zillow in the third quarter.

But Zillow Offers isn't done growing yet. Earlier this month, the company announced it has officially begun buying and selling homes in Los Angeles, the second-largest housing market in the U.S., with more than 2.5 million units. And by the middle of next year, Zillow Offers should add four more large metropolitan markets to its list. 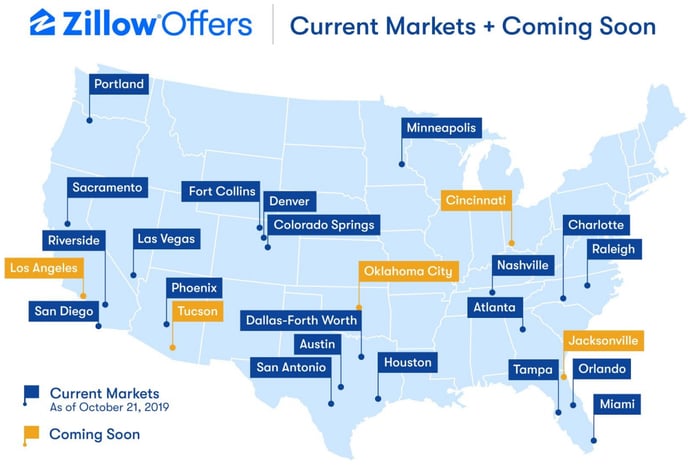 For perspective, this puts Zillow squarely on track to meet its longer-term target of buying 5,000 homes per month -- a total it expects will not only fuel revenue and earnings for its homes business, but also feed a virtuous cycle of at least 3,000 mortgage loans written per month through its mortgages segment.

On Premier Agent retention, and the (limited) impact of Flex pricing

Meanwhile, the primary culprit behind Zillow's seemingly disappointing guidance in August was monetization changes related to testing of more flexible ("Flex") payment models for its core Premier Agents business. Under that model, Zillow's Premier Agents pay the company a success fee only after the agent closes a deal, which meant shifting some of Zillow's expected lead-generation revenue to future quarters.

During Zillow's third-quarter conference call, CEO Rich Barton clarified that these early Flex pricing model tests (currently in only Phoenix and Atlanta) are expected to represent just 5% of total Premier Agent monthly recurring revenue. Furthermore, Barton says Zillow will not expand the model until it has "the data to convince us and you that Flex will openly become accretive to our bottom line."

Even then, Zillow's Premier Agent revenue climbed a modest 3% year over year last quarter (or 5% excluding the Flex test markets) to $240.7 million, exceeding the high end of Zillow's guidance on improved satisfaction metrics from both customers and agents. In recent years, Zillow has increasingly focused on partnering with its most productive, "customer-service-focused" agents. That decision to prioritize quality over quantity is obviously yielding fruit.

Considering Zillow's latest guidance calls for total revenue this year to be right around $2.6 billion, it seems the ceiling for Zillow's potential growth is now virtually nonexistent. With shares trading more than 30% below their all-time high (set in 2018), even after their recent rise, I think Zillow Group stock is still worth buying today.