Please ensure Javascript is enabled for purposes of website accessibility
Log In Help Join The Motley Fool
Free Article Join Over 1 Million Premium Members And Get More In-Depth Stock Guidance and Research
By Nicholas Rossolillo - Updated Dec 27, 2019 at 9:43AM

Shares of the “e-commerce-resistant” REIT are flat but delivering a hefty 8.5% dividend.

2019 was a wild year for many real estate investment trusts, or REITs. Shares of many advanced fast early in the year as the Federal Reserve cut interest rates (remember the inverse relationship between interest rates and capital-intensive assets like real estate), only to reverse course again once the Fed said the rate cuts were over for a while and the global economy flashed warning signs that a recession might be near.

Whitestone REIT (WSR 1.90%) has been no exception, with shares up as much as nearly 20% this year, but now currently sitting on a meager 8% calendar year return -- compared with a 29% advance for the S&P 500. However, as with other REITs, the real reason for making a buy is for the dividend income, and Whitestone currently yields 8.5% a year. The commercial property owner and manager isn't as solid as some of its peers, like Store Capital, but the quarterly payout goes a long way toward making this real estate portfolio worthy of a look.

"E-commerce resistance" is the name of the game

Whitestone owns and operates commercial properties in Arizona and Texas (and has one property in North Chicago), and it focuses on acquiring and upgrading what it calls "e-commerce resistant" real estate in the fast-growing metropolitan areas of Phoenix, Houston, Dallas, and San Antonio. Management is focusing on these cities because of expected above-average population growth in the years ahead, largely driven by retirees migrating to warmer climates.

Normally, growing economies equate to higher prices for commercial property managers, but the disruptive force of e-commerce led by Amazon in the last decade has wreaked havoc on many of these properties. Thus, Whitestone says it has a pipeline of acquisitions built up, many of them distressed assets (with low occupancy rates or facing potential foreclosure) in need of some reworking. The team upgrades and re-tenants these properties to make them modern community centers -- a mix of everyday necessities like grocery stores and entertainment venues to local vendors and service providers. Non-core assets that don't meet the criteria are offloaded to make room for potentially better acquisitions.

The results of this strategy have been pretty good. Though shares are up a meager 16% since the REIT's IPO in 2010, that fat dividend paycheck has remained stable over that period of time. For a company looking to be opportunistic in the distressed retail space, its total occupancy rate of 90.4% at the end of Q3 2019 isn't bad either -- although it falls below the average public retail REIT occupancy rate of 94.6%, according to industry advocacy group Nareit. Funds from operations (FFO, the equivalent of earnings for a real estate trust) are up 355% since the IPO as well. And all of this has occurred during the so-called "retail apocalypse" as the industry has adjusted to the digital shopping age. So what gives with that share price?

A few reasons for potential concern

Whitestone's results have been solid, but there are reasons why investors haven't been treated to an appreciating share price to go with the dividend paydays.

First, acquisitions have to be paid for somehow. As a REIT, Whitestone pays out the majority of its bottom line to shareholders, which means its growing portfolio of property has been acquired using new debt and share issuance. As for debt, it has grown over 500% since Whitestone went public, up to nearly $622 million and good for a debt-to-equity ratio of 1.12. While the company could sell off some of its less-valuable properties to get the balance sheet back in order, the amount of debt currently on the books is well above the average for Whitestone's retail REIT peer group. 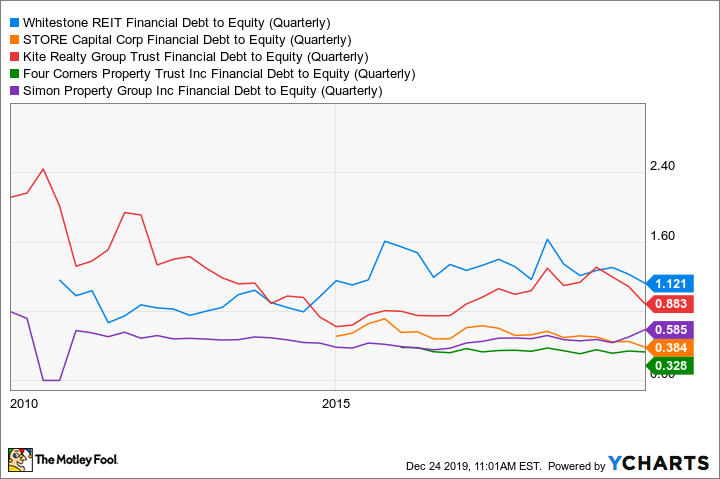 But what about funds from operations? That too hasn't really increased for shareholders as the company has minted and sold plenty of new shares over the last decade to fund its growth. As a result, funds from operations per share have been diluted and actually declined as share count has risen. 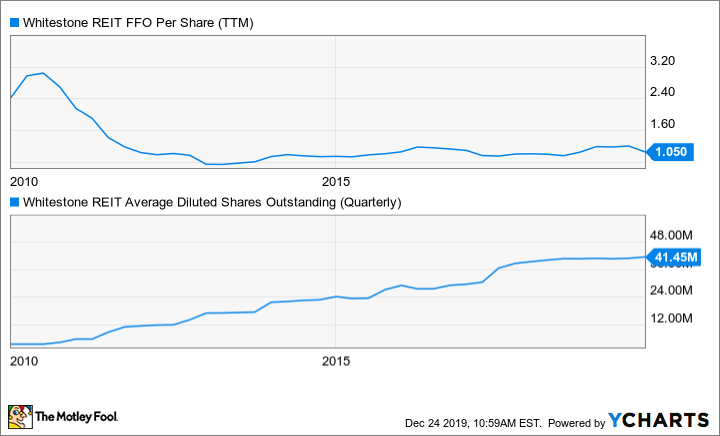 The upshot, of course, is that the above-average dividend yield accounts for the high burden of indebtedness and profitability per share.

What does it all add up to?

For those purely in it for the income, Whitestone doesn't look like a terrible bet, and the fast-growing cities it plays in could lead to improving occupancy rates and rising property values. Stabilizing interest rates should also have a positive effect on FFO. Thus, I shy away from calling this one a great dividend investment, but it does look like a solid one that could play a small role in an income-generating portfolio.

Avoid This Stock Even If the Market Crashes