Tobacco stocks have defied naysayers for a long time. Even though rising awareness of potential health risks have created a secular decline in smoking, major producers of cigarettes have remained lucrative businesses that produce a lot of cash. Philip Morris International (NYSE:PM) hasn't been an independent company for very long, but it has a long history that dates back for decades from long before the global tobacco giant split itself into two parts.

Tobacco stocks have also been a rich source of income for dividend investors, and Philip Morris International has done a good job of consistently boosting its payouts over time. However, more recently, the company has had to deal with a wide range of challenges, many of which concentrate on its strategy to work toward phasing out its traditional cigarette business in favor of reduced-risk alternatives.

With some criticism hitting e-cigarette manufacturers lately, some Philip Morris shareholders seem not to be entirely comfortable with that strategy. Let's look more closely at Philip Morris International and whether investors should expect a higher dividend in 2020.

After its spinoff in the late 2000s, Philip Morris International had a reputation to live up to, and the tobacco stock initially did just that. During its early years as an independent company, Philip Morris tried to spur dividend growth at a rapid pace. Annual increases in payouts were commonly between 10% to 20%, keeping up with the health of the overall business.

However, Philip Morris started running into trouble in the mid-2010s, and that forced the tobacco company to re-evaluate its strategy with respect to dividend growth. Currency-related headwinds weighed on Philip Morris' bottom line, but more importantly, foreign governments started looking at some of the same regulatory restrictions that the U.S. had started in past years. The net result was to slow the tobacco giant's dividend growth rate to a crawl. 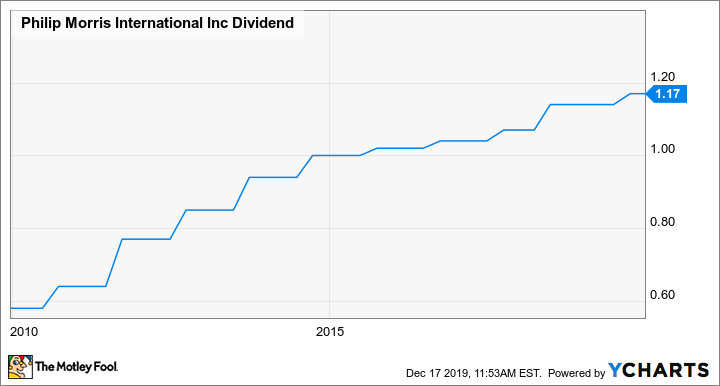 Things seemed to look up for Philip Morris International's dividend investors in 2018, when dividend growth returned to a healthier 7% pace. But the tobacco company's 2019 boost amounted to less than 3%, reawakening fears of a cloudy future.

From a fundamental perspective, Philip Morris International has done a reasonable job in promoting its business and continuing to generate cash. Even though shipment volumes during the third quarter of 2019 were down almost 6% year over year, Philip Morris has been able to keep raising prices in order to keep dollar revenue rising. Even though the strong U.S. dollar has hurt the company's revenue growth by causing the local currency it collects to be worth less on a dollar basis, signs of popularity of its products are a good sign for Philip Morris.

Yet the biggest question for Philip Morris International is whether its IQOS heated tobacco system will end up performing well in its global markets. Japan has been a strong market for IQOS, but volatility in its numbers there have raised fears among shareholders. Philip Morris hopes to introduce IQOS to the U.S. through its former parent, but the new controversy surrounding e-cigarettes could end up snaring IQOS, as well. If that were to happen, it could prove devastating to the company's future plans.

Given all that uncertainty, it could be challenging for Philip Morris to deliver anything but a token dividend boost in 2020. A repeat of the $0.03 per-share increase wouldn't be surprising, and it would actually encourage some who have bigger fears that the dividend stock might end up needing to stop hiking its payout if plans for IQOS don't work out as well as hoped.