In expanding its portfolio with the development of Cerro Moro and making notable changes to its dividend policy, Yamana Gold has garnered the attention of gold-minded investors. But does the stock's recent rise indicate that it's too late to pick up shares, or is there still room for the stock to run? Let's take a closer look at the bull and the bear cases to see if there's still an opportunity for shareholders to turn to Yamana Gold and add some luster to their portfolios. 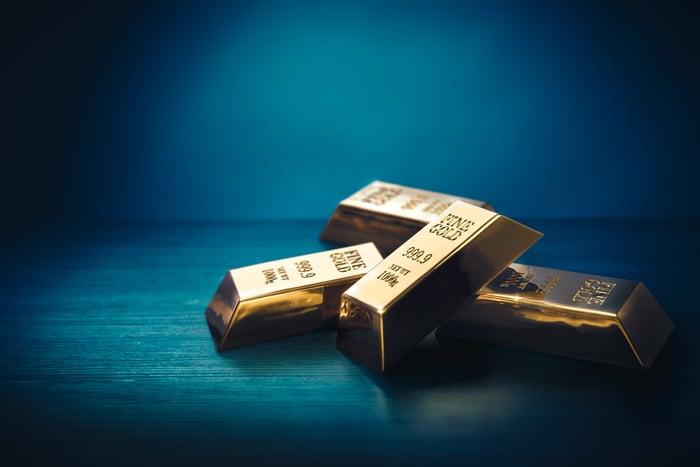 In the eyes of optimists...

While gold-mining stocks may not necessarily be the top choice when it comes to dividend investors, Yamana Gold's recent attention to its dividend policy has made it a compelling option for those looking to pick up some yield while gaining exposure to gold. In mid-December, the company presented investors with an early holiday present and announced a 25% increase to the dividend. Standing now at $0.05 per share annually (effective first quarter 2020), the distribution has risen 125% since third quarter 2019. But wait: there may be more to come. In the press release announcing the recent dividend raise, Yamana stated that the recent activity is "part of a gradual and progressive approach to dividend increases as the Company's cash balances continue to grow from increasing free cash flow and successful and continuing initiatives to monetize its portfolio of non-producing assets and financial instruments."

Further illustrating the firm financial footing on which the company finds itself, Yamana has shored up its balance sheet recently, paying down $801 million of its total debt in Q3. Currently, the company has $949 million in net debt -- a notable decrease from the $1.66 billion in net debt it had at the start of the year. In terms of leverage, Yamana now has a net debt-to-EBITDA ratio of about 1.5, and management appears confident that it will achieve its long-term goal of a ratio below 1 before the start of 2021.

While there's a lot to be enthusiastic about regarding Yamana, bears may not be convinced. For one, with the company's recent sale of Chapada, the company no longer has exposure to copper production; consequently, it faces greater risk should a sharp downturn in gold and silver prices occur. Located in Argentina, Agua Rica, which has a copper resource of about 13.5 billion pounds, offers Yamana the potential to resume copper production, but the project is far from commencing operations. A feasibility study, for example, is expected to be completed in 2020.

The stock's price tag is surely another reason for some to be reluctant to pick up shares. Currently, the stock is trading at 8.4 times operating cash flow -- a premium to its five-year average multiple of 5.6 according to Morningstar. In fact, many gold-oriented stocks are trading at a richer valuation than their five-year averages, suggesting that maybe it's not Yamana Gold, per se, that is unattractive but gold stocks in general.

Should you take a trip down this road paved in yellow brick?

Although Yamana Gold may not appear on the radars of value investors, management's attention to rewarding shareholders and the company's success in growing cash flow make it one of the more compelling options for gold-minded investors. The company's pipeline of projects in development, of which Agua Rica is only one of several, indicate that there are plenty of organic growth opportunities remaining for the company in the years ahead. In terms of the more immediate future, however, investors can look for encouraging signs of the company's growth such as growing cash flow, reduction in leverage, and progress in developing growth projects.