You'll hear plenty of predictions about what might be in store in 2020. Here's one prediction that's almost certain to come true: More money will be spent on healthcare. And where lots of money is spent, opportunities exist for investors.

Which stocks are most likely to be the biggest winners in the new year? I think three healthcare stocks appear to be especially poised to deliver nice gains for investors in 2020. They're all profitable. They're all growing. And they all have strong prospects for future growth. Here are my picks for the best healthcare stocks to buy for 2020, listed in alphabetical order. 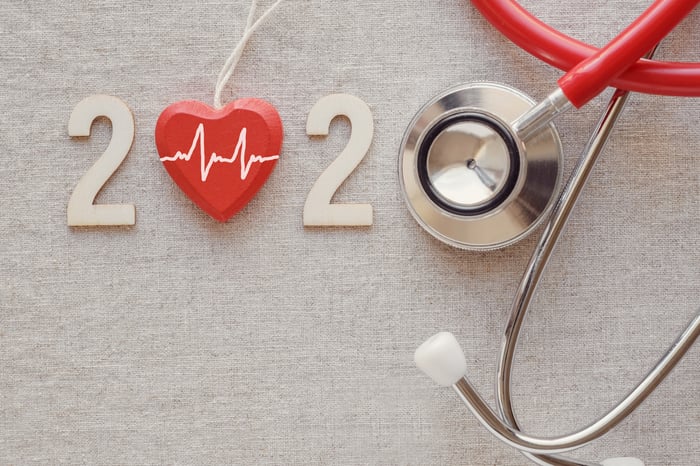 It's not easy for a healthcare giant to deliver double-digit percentage year-over-year earnings growth. But that's exactly what Abbott Labs (NYSE:ABT) routinely does. I look for more of the same in 2020.

The biggest potential catalyst on the way for Abbott is the anticipated U.S. clearance for the new version of its popular Freestyle Libre continuous glucose monitoring (CGM) system. Robert Ford, Abbott's current president and COO who will soon become CEO as Miles White steps down, said in the company's third-quarter conference call that Abbott is "working through a handful of open items" with the U.S. Food and Drug Administration (FDA) but remains confident about approval for the new version.

I expect Abbott will indeed win the FDA clearance for the interoperable CGM version of Freestyle Libre in 2020, setting the stage for even more impressive sales growth. I also think that Abbott's other newer products, including Alinity diagnostic systems and MitraClip mitral regurgitation devices, will fuel growth next year.

Intuitive Surgical (NASDAQ:ISRG) has been one of my favorite healthcare stocks for a while and still ranks near the top of the list. The robotic surgical systems pioneer continues to generate impressive sales and earnings growth of more than 20% year over year.

What I like the most about Intuitive Surgical is its rock-solid business model. The company makes over 70% of its total revenue from recurring sources, especially sales of replacement instruments and accessories for its da Vinci robotic surgical systems. Every new system it sells paves the way for higher recurring revenue. Intuitive is also leasing increasingly more systems, which boosts recurring revenue even more.

I also like Intuitive Surgical's commitment to innovation. In 2019, the company received five key FDA clearances that allowed it to market the new Ion robotic system for lung biopsy, its Iris augmented reality overlay software, da Vinci SP for the transoral surgery indication, the SureForm 45 mm stapler, and the da Vinci handheld camera. These kinds of innovations should translate to more growth in the future.

But could Intuitive Surgical be in trouble with more competition on the way, including Medtronic's new robotically assisted surgery system that will compete against da Vinci? I don't think so. My view is that this competition will expand the total market and actually help Intuitive Surgical over the long run.

How does the stock of a company with an expanding monopoly in a multibillion-dollar market and multiple pathways to generate future growth sound to you? Vertex Pharmaceuticals (NASDAQ:VRTX) is such a company. I think this biotech stock is poised to be a big winner in 2020 and beyond.

Vertex's monopoly is in treating the underlying cause of cystic fibrosis (CF), a progressive genetic disease that impacts around 75,000 patients worldwide. The biotech had three CF drugs on the market in the U.S. until October, but then won an early FDA approval for Trikafta. Vertex fully expects to win approvals in more countries for the powerful new drug and expand its total number of patients that can be treated with its therapies by more than 50%.

While Vertex looks at expanding its CF opportunity tremendously over the next few years, the biotech is also developing therapies targeting other indications. It's partnering with CRISPR Therapeutics on gene-editing therapies that hold the potential to essentially cure rare blood diseases beta-thalassemia and sickle cell disease. Vertex also is evaluating a couple of candidates in early stage clinical studies for treating rare genetic disease alpha-1 antitrypsin deficiency (AATD).

Although Vertex is especially strong in developing therapies for rare genetic diseases, the company has its eyes on some conditions that aren't so rare as well. Vertex claims a promising pain program that should advance to late-stage testing in the near future. It also acquired Semma Therapeutics in 2019, a small biotech that's working to develop a cure for type 1 diabetes. All of this makes Vertex the best biotech stock on the market in my opinion and one of the top healthcare stocks to buy for 2020.