Carter's (NYSE:CRI) topped analysts' average price target of $109 a share in December, and the stock appears headed for a 33% gain on the year, outperforming the S&P 500 Index's 27% increase. Though some might be concerned that the stock doesn't have much more room to climb from here, the company's position in the market, earnings growth, and e-commerce strategy could all drive further gains in 2020.

Most Americans have either worn a Carter's garment or have purchased one -- and more likely, both. The maker of clothing for babies and children has been around since 1865, so we can truly call the brand an American classic.

These days, Carter's is the best-selling baby clothing brand in the U.S., with almost five times the market share of its nearest competitor. Companies in the same space include The Gap, Old Navy, and Disney, but The Washington Post has cited The Children's Place (NASDAQ:PLCE) as Carter's closest rival, with sales of $1.9 billion last year. Carter's reported $3.5 billion in sales for the same period. According to Statista, the U.S. market for baby and young children's apparel was worth $21 billion in 2018. 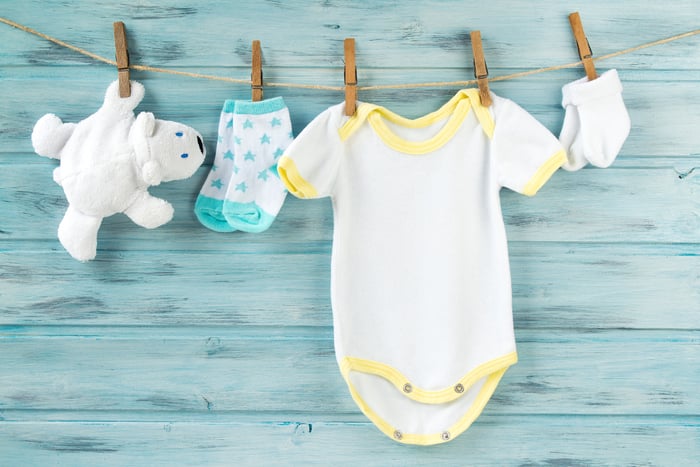 Name recognition and a reputation that has been passed down for generations have helped Carter's remain on top, but the company has also aggressively evolved with the times. Recognizing the rising popularity of Target in the early 2000s, it created the Just One You line exclusively for the retailer. More recently, Carter's launched the Simple Joys line for Amazon, once again turning a potential competitor into an ally. Online sales to wholesalers grew over 30% last year, and the company expects total online sales of its brands to surpass $1 billion in 2020.

This year, its latest omnichannel upgrade was the launch of free same-day pickup in stores of online orders. Most items are available for pickup within two hours of the order. The company said the convenience this offers shoppers is also inciting some to make additional purchases: About a quarter of online shoppers who pick up their orders end up buying more items once in the store.

Carter's efforts have resulted in earnings that surpassed analysts' estimates for the past four quarters. In the third quarter, EPS was $1.87, beating the consensus EPS estimate of $1.70. Over the next few years, management is aiming for sales growth of 3% annually, with a goal of $4 billion in net sales by 2023. The company has about 850 stores in the U.S., and management said it doesn't see a need for more; while it does plan to close some shops and open others in order to have a physical presence in just the right locations, it will keep the total number about the same.

The picture looks bright for Carter's but, as is true for any business, it does face challenges. One question is how much progress it will be able to make with Skip Hop. When Carter's acquired it in 2017, it said it expected the brand to generate about $15 million annually by its second year, but as of Q3 2019, the actual figure was less than $5 million annually. One reason for the disparity was the bankruptcy and closure of Toys R Us, the brand's largest wholesale customer. Carter's remains optimistic, however, asserting that Skip Hop will generate $200 million in sales in the coming years.

Investors should keep an eye on the evolution of the Skip Hop story, and monitor whether Carter's can keep up its string of positive earnings surprises. Though its share price has climbed this year, the stock still trades at less than 20 times earnings, which seems inexpensive considering the company's 30 consecutive years of sales growth. And the stock still hasn't fully erased its decline from a high of about $120 per share in early 2018. As the year comes to a close, the holiday presents have been purchased and unwrapped, but there still is time for investors to buy themselves one more gift: Carter's shares at a reasonable price.