Novo Nordisk (NYSE:NVO) is a pharma company that is perhaps best known for its suite of diabetes products. The company has performed relatively well this year, with its shares up by 24% since early January, a performance that's right in line with that of the pharmaceuticals industry -- as measured by the SPDR S&P Pharmaceuticals Index -- which is also up by about 24% year to date.

However, Novo Nordisk has encountered some headwinds of late. Most notably, the company is facing pressure over the prices of its diabetes drugs, which is an issue it has been dealing with for a while. With this background in mind, let's see whether Novo Nordisk is a good stock to buy at the moment, or whether investors would do well to stay away for now.

A leader in the diabetes market

Diabetes is a serious health condition that affects up to 30 million Americans and many more people worldwide. And although the market for diabetes treatment is competitive, Novo Nordisk is one of the leaders in this area. The company's diabetes treatment includes several insulin products (Novo Nordisk produces about 50% of the world's insulin) as well as GLP-1 receptor agonists Victoza and Ozempic. People with type 2 diabetes have lower than normal levels of glucagon-like peptide-1 receptor, a hormone secreted primarily in our intestines that helps our bodies control our blood sugar levels. GLP-1 receptor agonists help patients with diabetes lower their blood glucose levels. 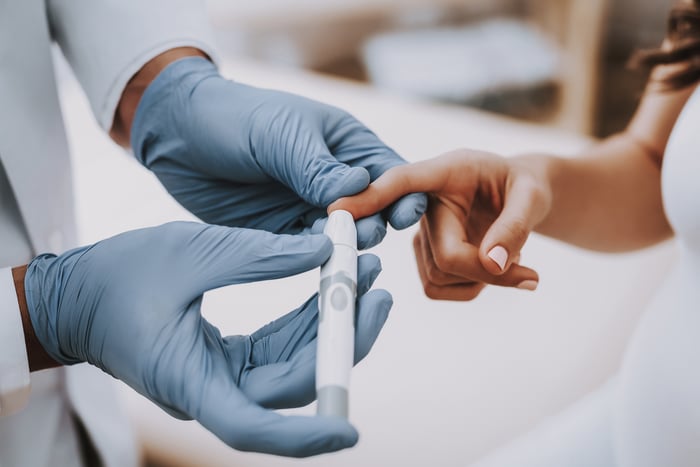 During the third quarter, sales of the company's GLP-1 drugs increased by 25%, compared to only 1% growth for its insulin products. Further, the U.S. Food and Drug Administration recently approved Rybelsus, which is another GLP-1 product that is poised to be successful on the market. After all, Rybelsus is the first GLP-1 drug approved by the FDA that can be taken orally (as opposed to injections, which is how GLP-1 drugs are typically taken).

Novo Nordisk already holds a strong market share in the market for GLP-1 products. CEO Lars Fruergaard Jorgensen said during its third-quarter earnings conference call: "Novo Nordisk has now regained total volume market leadership with a 47% combined GLP-1 volume market share." Things are only going to get better with the addition of Rybelsus. Also, Novo Nordisk's top obesity product, Saxenda, is performing well, with its sales increasing by 50% year-over-year during the third quarter.

Beyond its diabetes and obesity products, the company's biopharmaceuticals segment includes hemophilia treatments NovoSeven and NovoEight. During the third quarter, sales of Novo Nordisk's biopharmaceuticals products increased by 8% compared to the year-ago period. Lastly, the company has several potential products in late-stage testing, including hemophilia treatment Concizumab, and a treatment for growth hormone deficiency called Somapacitan. Overall, Novo Nordisk boasts more than a dozen potential products in its pipeline.

Novo Nordisk faces pressure over the price of its insulin

Lawmakers have come after Novo Nordisk for the prices of its insulin. In February, the U.S. Senate Finance Committee launched an investigation into rising insulin prices and sent a letter to Novo Nordisk requesting a list of every insulin product the company sold since 2014, as well as information on how it sets the prices for these products. Eli Lilly and Sanofi -- two pharmaceutical companies that also manufacture a significant amount of insulin sold in the U.S. -- were also targeted. As a result of this pressure, Novo Nordisk announced in September that it would offer more affordable insulin products starting on Jan. 2, 2020. However, we likely haven't heard the end of this saga just yet. Further, with 2020 being an election year, any overhaul of the healthcare system could impact its ability to set the price for its products.

Novo Nordisk's shares aren't exactly cheap at the moment. The company is currently trading at 23.55 times past and 21.55 times future earnings, while its price to earnings growth (PEG) ratio is a bit high at 2.52.

Also, the company's reliance on its diabetes business could become a problem, and while it is looking to diversify into other areas, its diabetes and obesity segment still accounted for 84% of its sales during the third quarter.

Finally, the company may still face some pushback over the prices of some of its insulin. Even with these issues, I still think Novo Nordisk is a buy, especially now that Rybelsus has been approved. As an innovative type 2 diabetes drug (type 2 diabetes accounts for more than 90% of all cases of diabetes), the addressable market for this product -- both in the U.S. and abroad -- makes its prospects mouth-watering. Thus, sales of Novo Nordisk's GLP-1 drugs will likely continue leading its revenue on an upward trajectory, and the company's shares could continue climbing in 2020.