Past performance tells you nothing about the future gains or losses of any stock, but investors who bought into these three stocks 10 years ago have been smiling all the way to the bank.

The three consumer goods stocks below all returned more than 1,000% this decade. That's a tenfold boost, turning an original investment of $10,000 into $110,000 or more. How far ahead of the general market does that benchmark stand? You be the judge: The Dow Jones Industrial Average gained 170% over the same period while the S&P 500 index stopped at an increase of 186%.

Have these three winners reached their respective peaks, or are they still good investments after the huge price increases listed above?

The streaming video market will grow much larger

Video-streaming veteran Netflix arguably created the industry in which it works. Ten years ago, the company was known as a DVD-by-mail rental service that just happened to offer a small selection of streaming titles as a free bonus. Now, Netflix runs a global streaming service with 158 million subscribers, powered by a multibillion-dollar annual investment in a wide variety of original content. The DVD service still has 2.3 million customers, but streaming sales accounted for 98.6% of total revenue in the third quarter of 2019.

There's plenty of fuel left for Netflix's growth engines. In the third quarter, earnings jumped 65% on 31% stronger revenue, measured against the year-ago period. The company saw a 6.4% increase in its domestic subscriber count while the number of paid international customers rose by 33%. Netflix's free cash flows are negative at the moment, but management expects to see a smaller cash burn in 2020 followed by positive cash flows in a few years.

The streaming video market is still small next to cable TV and over-the-air broadcasting, globally speaking. Digital streaming accounted for less than one-quarter of the worldwide market for pay-TV services in 2018, according to industry analyst Digital TV Research. Netflix leads the charge of a few global and many local streaming platforms, growing that market slice in a hurry.

Come back in five years and you'll see Netflix as a thriving media giant, whose value can be measured against its positive cash flows rather than top-line growth trends. This growth story is far from over. 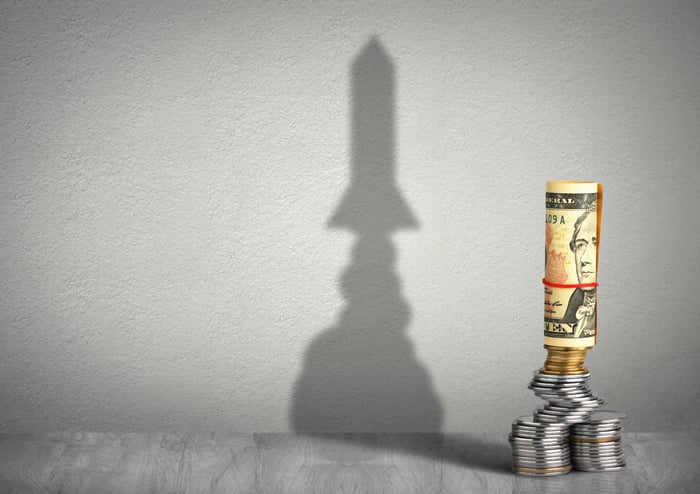 Can this pizza-flavored turnaround go any further?

In 2009, Domino's was tied with Chuck E. Cheese in a Brand Keys survey of America's favorite pizza parlors. Tied for last place, that is -- a result so adverse that Domino's revamped its pizza recipe to kick off a long-term turnaround story.

The company embraced social media marketing in a big way, placing CEO Patrick Doyle in omnichannel media streams next to both happy customers and obvious mistakes. That effort started to set Domino's apart from other pizza chains as an authentic company with a clear focus on good customer experiences.

And the relaunch of Domino's with better pizza recipes and a more approachable corporate brand paid dividends in the 2010s. The company's sales rose 150% over the last 10 years, and free cash flows more than quadrupled. Compare and contrast these gains over the same period to archrival Papa John's International (NASDAQ:PZZA), which won the 2009 taste survey mentioned above. That company's sales increased by a mere 40%, and its cash flows have turned negative. Papa John's stock gained a respectable 425% this decade, but that's nothing next to Domino's 34-bagger.

The company is still reporting sustainable growth, and management keeps a tight focus on long-term profitability. This pizza stock looks likely to stay hot and fresh for years to come.

MercadoLibre has long been seen as the eBay of Latin America, but that's hardly the full story. This company is not only dominating the e-commerce sector in key markets such as Mexico and Brazil, but it also offers a plethora of ancillary services that effectively make allies out of potential rivals.

Besides the online marketplace, MercadoLibre also runs its own shipping and delivery network, an online payments platform akin to PayPal, and a plug-and-play merchant platform where small and medium businesses can set up shop online.

Revenue has grown tenfold over the last decade. Profits and cash flows come and go, as MercadoLibre is likely to reinvest any spare cash into heavier marketing and infrastructure ideas. This company is keeping the pedal to the metal, optimized for top-line growth for the foreseeable future. Profits will come later when MercadoLibre can take full advantage of a dramatically larger addressable market. The stock price should follow suit, making it one of the most exciting growth investments available today.