The stock market's 2020 got off to a roaring start on Thursday, the first trading day of the year. With the headwind of a strong 2019 behind it, investor optimism burst into the new year. Top stocks and indexes shot skyward like a cork fired from a Champagne bottle.

So far, this year is quite a party, but as ever we had a few wallflowers. Here are two stocks that didn't share in the merriment Thursday. 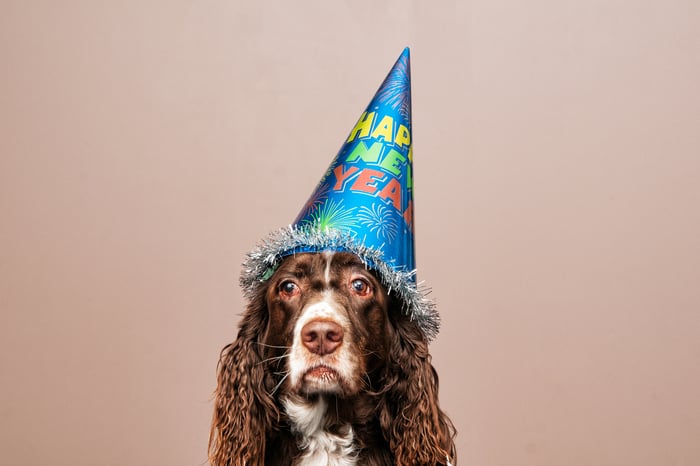 So much for the Big Marijuana Stock Rally of 2019/20. On Dec. 31, the share prices of weed companies saw a sudden and unexpected spike, which was a great relief considering the lousy 2019 most of them had. But the hangover came quickly, with more than a few recording declines on Thursday. Aurora Cannabis (NASDAQ:ACB), a bellwether stock in the industry, slumped by 6.5% on the day.

The catalyst for Aurora in particular seems to be a new analyst note from Cantor Fitzgerald. Analyst Pablo Zuanic lowered his price target for the company's stock, to 5 Canadian dollars ($3.85) from the previous CA$5.85 ($4.50). Zuanic also said Nelson Peltz should "call for the same greater financial discipline at ACB" that he did for underperforming companies such as PepsiCo and Mondelez.

The man Zuanic is addressing is a renowned (or notorious, depending on your point of view) activist investor. In March 2019 Peltz was hired as a strategic advisor to Aurora.

We don't yet know if Peltz is heeding this call, but Cantor Fitzgerald has a point. Aurora frequently lands well in the red on the bottom line, and its formerly ambitious expansion program has burned cash at a rapid rate. The company is also quite deeply in debt. Meanwhile, the cannabis industry at the moment has a host of intrinsic challenges.

Put another way, the company has a lot of tough problems to contend with as it posts losses and spends money. Its stock doesn't feel like a buy at the moment.

A lawsuit filed on Wednesday might be the culprit. It was reported in various media that a woman in New York state is attempting to bring a class action lawsuit against General Mills for deceptive advertising. According to those reports, dog owner Shannon Walton believes that certain products in General Mills' premium Blue Buffalo pet food brand are quite heavy in carbohydrates, and are thus not the healthy products they purport to be.

General Mills hasn't commented on these allegations, for which Walton estimates her class should be compensated by over $5 million.

It remains to be seen what kind of traction this lawsuit will get, but I wouldn't see it as particularly threatening -- either in legal force or in potential renumeration. It's a bit of a stretch to believe the suit's intimations that the company is deliberately deceiving customers about the nutritional composition of Blue Buffalo products. Even so, $5 million when matched against General Mills' almost $17 billion in annual revenue is chump change.

Still, it illustrates the fact that Blue Buffalo, a pricey 2018 acquisition, has quickly become a critical part of General Mills' operations. In fact, during the company's most recently reported quarter, its now-large pet segment was the only one that recorded a meaningful increase in year-over-year sales, at 16%.

Overall, though, General Mills is built on a foundation of breakfast cereals -- not really an exciting product category these days. So the company is basically a slow-growth veteran in its industry.

This isn't necessarily a bad thing, as in this case it washes out in reliable net profits and decent cash flow. As a result, General Mills' dividend, which is paid on the regular and currently yields over 3.7%, is pretty compelling. This stock, then, should be on the consider list for income investors looking for better-than-average yield.