Visa (NYSE:V) and Square (NYSE:SQ) are two of the best-known financial services companies in the world right now, but they're very different from an investment perspective.

Visa is the financial giant that's at the center of trillions of dollars in credit card transactions and Square is the nimble upstart trying to disrupt the established financial system, starting with mobile payments. Another way to differentiate the two companies would be to say that Visa is a stock for value investors and Square is better for growth investors.

But there's a lot more to these financial services companies than that. 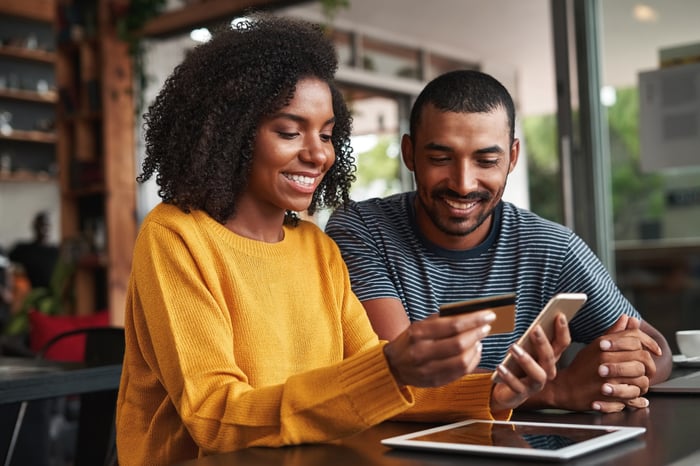 The core businesses of Visa and Square

Both Visa and Square take a skim off every transaction that happens on their platforms, but Visa's is much larger and more profitable than Square's. As the charts below illustrate, Visa is more than five times larger from a revenue standpoint and is highly profitable while Square is yet to post a profit. 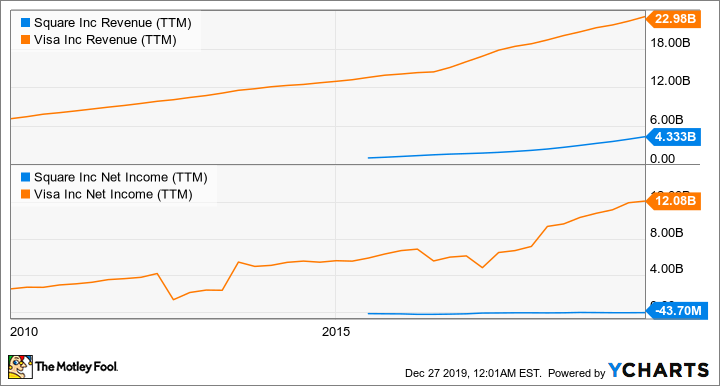 Much of the difference comes from the scale at which they operate, but part of it also derives from each company's place in the value chain. Visa is a worldwide payment company with only a few genuine competitors to think about. It has pricing power as a result.

Square is in a highly competitive market niche, with dozens of specialized rivals offering similar suites of services beyond transactions, like scheduling, payroll, and even capital. As a result, it generates fairly low margins, and will even offer discounts to high-volume customers to win their business. Visa, by contrast, gets customers because businesses have to use its service almost by default.

When it comes to making money, Visa is clearly the winner. But Square's revenue growth on a percentage basis is far more rapid, albeit from a much smaller base. 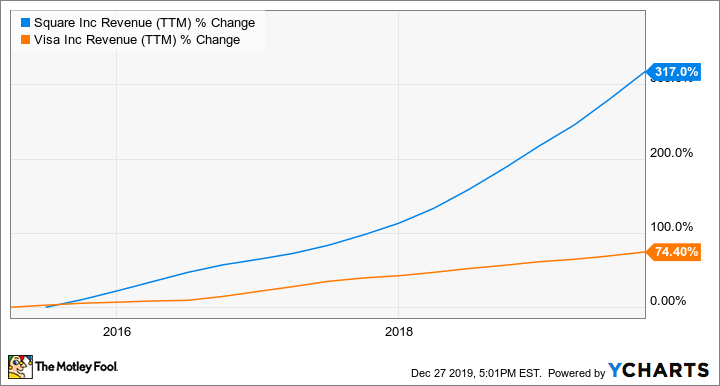 Square has been able to grow in a couple of ways. First, it's adding customers to the platform rapidly, both by reaching new clients and expanding the capabilities that make it attractive to businesses like restaurants and retailers. It has also expanded the number of services it can offer (and charge) existing customers, including payroll, scheduling, capital, and much more.

Where Square has a lot of room for growth is in niches outside of business transactions. It has tried to do that with Square Cash, which essentially cuts out the fees that Visa and other legacy financial institutions charge for fund transfers. If it can create a new ecosystem that sidesteps the traditional intermediaries, it could lower its costs and increase margins. It's a long shot, but that's the best-case scenario for Square long term.

The battle between these two companies comes down to a choice between a growth stock and a stock that has a highly profitable business and a wide competitive moat. I prefer the stability of the moat that Visa has built, and don't see any reason to think it will be disrupted in the near future.

Better yet, as Square grows, it actually helps grow Visa's network and revenue as well. That's another reason Visa is the better of these two stocks, even if it can't match Square's growth rate.